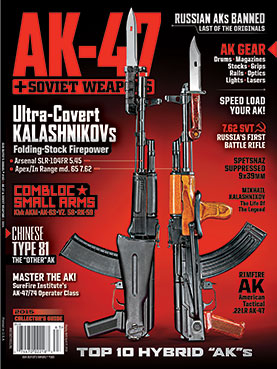 ROMANIAN MD. 65 7.62MM  by Michael O. Humphries
Custom build of a classic underfolder with Apex Gun Parts and In Range!

BIRTH OF THE AK  by Maxim Popenker
The Kalashnikov rifle’s path from concept to worldwide military icon.

SECOND-GENERATION AK  by Frank Iannamico
The evolution and history of the Kalashnikov milled receiver.

SOVIET SPEC-OPS PISTOLS  by Maxim Popenker
Suppressed covert pistols built to give the Red Army the edge in the Cold War!

10 HYBRID WARRIORS  by Robert A. Sadowski
Weapon systems that combine the best of the East and West into one package!

HELMETS OF THE DDR  by Peter Suciu
Warsaw Pact relics designed for the evolving East German military after WWII.

THE AK ARCHITECT  by Maxim Popenker
Considering the life and works of Mikhail Kalashnikov.