WARM COAT, HOT GUN
My business is in a part of town that has been on the decline for some time. After many of my business neighbors suffered burglaries and run-ins with local gang members, we’ve all gotten to be pretty good friends and try to watch out for each other’s businesses. To a great extent, word has gotten out that we’re armed and prepared to defend ourselves. The amount of “mischief” in the area has fallen a great deal in the past couple of years.

Recently, however, I was leaving my business one night and noticed some flickering lights through the woods. Approaching to investigate, I found that one neighbor’s business was on fire. A call to the local emergency dispatcher got a fire truck on the scene quickly and major damage was averted. The worst part was that the fire appeared to have been intentionally set.

Normally when I leave my business I will drive around the block just to check on the other properties and make sure no one is loitering around them. The night after the fire I decided to walk around the block, rather than drive. My thinking was that if somebody was back in the shadows trying to commit arson, I’d be better able to spot them on foot than in a car. Besides, I could use the 15 minutes of exercise.

It was about 8:30 in the evening and very cold. I pulled on my Sig Sauer concealed carry jacket. I had just purchased it the week before and decided this would be a good time to take it outside and see how warm it was. Of course, I placed my Taurus 851 .38 Special in the concealed carry pocket, just in case. But even so, I never expected to have to use it.

I walked outside and locked my front door and then proceeded out towards the sidewalk. I hadn’t walked more than 150 feet before hearing a car approaching, and slowing, from behind me. As it pulled up alongside me I glanced over, thinking that maybe somebody was going to ask for directions. No such luck. There were four men inside. They said nothing, just sped up and drove away, almost.

Just as I thought they were driving away, the car slowed and made a quick turn into the next drive, stopping completely just 30 feet in front of me. At that moment I slipped my hand into the concealed carry pocket on the coat and grasped the grip of the .38, but I didn’t pull it out—I don’t believe in skinning a firearm unless and until you’re actually forced to use it.

The instant the car stopped, all four men jumped out. I never stopped walking, I continued towards them, all the while with my hand on the grip of the revolver. In the split second that ensued, my mind filled with thoughts of what was going to happen if I had to shoot somebody. Would it be justified? And if so, would I still be sued in a civil suit? Would any misses hit anybody down the block? Could I reach the car and use it for cover against the two men still on the other side? A lot of thoughts cross your mind, when four men are 30 feet away and heading right at you.

The man that had exited the rear passenger side door had gotten out, straightened up and taken about two steps when he got a good look at me continuing to walk towards him with my right hand inside the left breast of my coat. He knew something was wrong and yelled something. Immediately, all four stopped and jumped back in the car and sped down the drive and around behind a building where they stopped.

Now my thoughts turned to the fact that I really didn’t have any cover. And if these guys were gang members, they were likely to be armed with something. No matter how much of a marksman you might be, the chance of having to shoot it out with four gunmen, or take out four men wielding knives at close quarters is not a pleasant thought. I figured they were taking a moment to decide if or how to handle me.

Sure, a person without a gun could have done the same thing—sticking their hand inside their jacket in an attempt to bluff the bad guys. But at that distance and with so little time, would a bluffer have been confident enough to pull it off? Any hesitation on my part would surely have tipped them off to the fact that I wasn’t really prepared to defend myself.

Although I never skinned the revolver, I’m convinced that the man who noticed my hand stuck in my jacket, along with my continued and confident walk directly at him, sent a strong message that I wasn’t bluffing. He knew I was armed and prepared to defend myself. As far as I’m concerned, being armed that night saved me from a robbery and ass-whipping at best, and at the very worst, from possibly being killed. By the way, the coat is indeed very warm.
—TK, NC 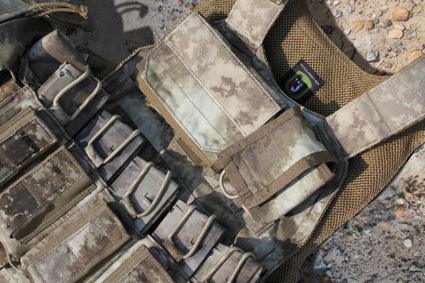 WARM COAT, HOT GUN My business is in a part of town that has…