0
SHARES
28
VIEWS
Share on FacebookShare on Twitter
Among the best of the best in terms of craftsmanship, 10-8 Performance delivers an extraordinary handgun with the Foxtrot, developed through years of practical, tactical, hands-on experience.

For those not familiar with Hilton Yam, he is a full-time law enforcement officer who started out tinkering with 1911s as a hobby. He is fortunate to be a member of a tactical team that runs Springfield Professional Models as their duty weapon. His team shoots thousands of rounds every year and Yam has learned what it takes to build a solid, hard-use 1911. Along the way he sought out several mentors—to include well-known names such as Steve Nastoff, John Miller, Chuck Rogers, and Larry Vickers.

A hobby soon became a second job and 10-8 Performance opened as a one-man shop. Unlike some shops, Yam does not take orders or work on customers’ guns. Instead he builds custom 1911s, one at a time, and then offers them up for sale. They never last long. Experience has also led Yam to design and produce a variety of OEM 1911 parts. These are made to his exacting specifications and are intended to improve the 1911 platform. You could describe 10-8 Performance as a “skunkworks” for the 1911—when something breaks, Yam finds a better way to make it, install it, or fit it. 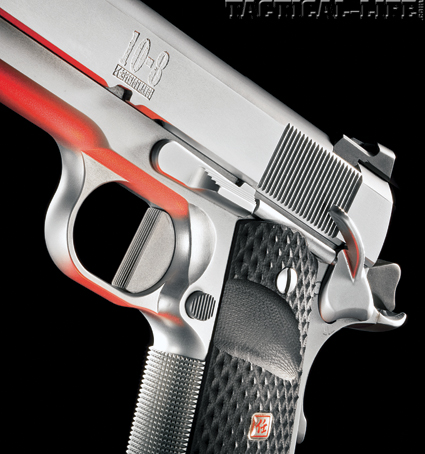 The slide stop is Yam’s own design, CNC-machined from bar stock and providing a pronounced flat ledge for improved purchase during manual slide lock operations.

Gun Details
The Foxtrot model I received for evaluation is actually a prequel to Yam’s Alpha and Bravo model, in that the project was started before the Alpha or Bravo. To quote Yam, “I would characterize this pistol as more of a display of craftsmanship and less a display of design concepts like the Alpha and Bravo.” The Foxtrot is based on a high-end frame and Caspian slide that Yam had “laying around the shop.” The project was started and then other projects caused it to be shelved for a while. When Yam found a few extra minutes in the day, he decided to complete the pistol and name it under the current sequence of pistols. 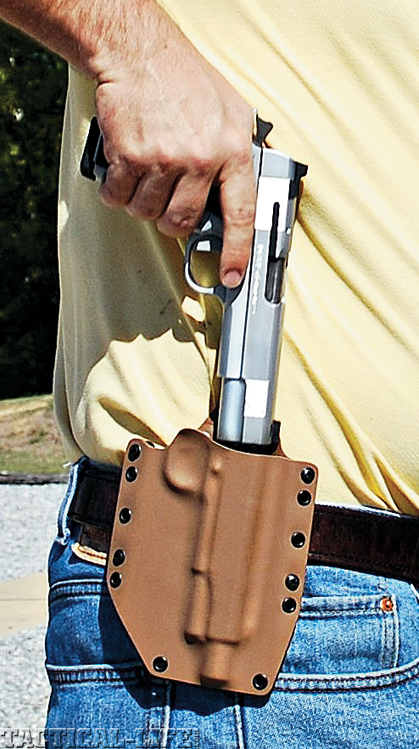 The Foxtrot is shown clearing “Kydex” out of a Raven Concealment scabbard, which is quickly becoming the holster choice for professionals.