In the history of U.S. military sidearms there has been one dominating name for 175 years—Colt. It is a matter of record. The Model 1911 .45 ACP was the greatest U.S. military sidearm of the 20th century, carried by American soldiers in two world wars, Korea and Vietnam. In the late 19th century, the .45 caliber Colt Single Action Army was the primary sidearm of the U.S. Cavalry, and during the Civil War fought between the Union and Confederacy in the 1860s, it was the new Colt Model 1860 Army chambered in .44 caliber percussion.

Introduced a year prior to the onset of hostilities between the North and South, the Model 1860 Army was the most advanced and lightest weight medium frame military handgun ever seen. Discharging .44 caliber loads formerly limited to the heavier, large frame Dragoons, the 1860 weighed only 40.5 ounces, almost half that of a Third Model Dragoon, which tipped the scales at 66 ounces. Not only was the 1860 Army lighter, but smaller, measuring 13.625 inches overall with an 8-inch barrel, compared to the Third Model Dragoon at just under 14-inches with a 7.5-inch barrel. The extra 1/2-inch in barrel length gave the 1860 Army a bit more weight up front and a longer sight radius. When fitted with a detachable shoulder stock, the military version of the 1860 Army also made a reasonably decent six shot carbine for the Cavalry. 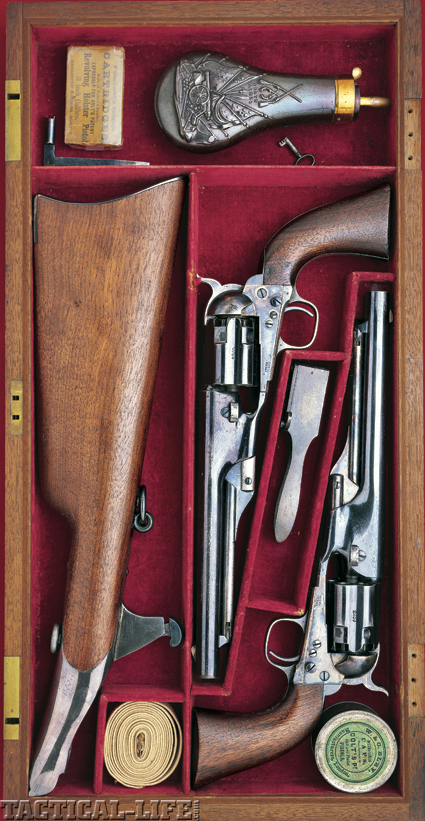 Cutting Edge Design
The secret of the 1860 Army was in its construction, featuring a new type of metal advertised as “Silver Spring Steel,” a lighter yet stronger steel that allowed the 1860 Army to withstand the pressures of .44 caliber loads. The 1860 was more than a new handgun; it was a work of design art. Here was a slim firearm with a tapered round barrel, compound curves, a trim, shallow frame, and a long, contoured grip. It was an elegant looking gun. Among the 1860 Army’s distinguishing features was a roll engraved, rebated cylinder, which was larger in circumference forward of the bolt stops, corresponding to a drop in the frame’s contour. 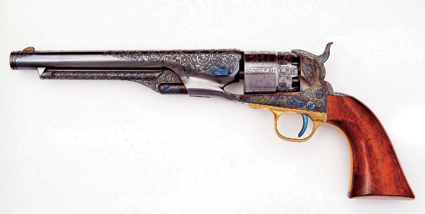 The 1860 Army revolver is a classic Colt design that is revered by handgun enthusiasts. Shown is a Colt 3rd Generation reproduction hand engraved by Conrad Anderson.