Little guns are making a big impression this year. Never has so much been made of the .380ACP (9mm Short) since Walther introduced the PPK back in the 1930s and even Walther has a new take on their venerable .380ACP cartridge for 2009.

Compact or “deep concealment” .380ACP semi-autos were among the most prolific of new models; SIG SAUER, Taurus and Magnum Research clambering onto the bandwagon that started rolling in 2008 with the success of the Ruger LCP (Lightweight Compact Pistol). With such respected international armsmakers bringing out deep concealment .380ACP models, small is definitely in for 2009.

Subcompacts
The new SIG SAUER P238 Subcompact is by far the most interesting in design and construction. Taking advantage of ballistic improvements made to the venerable .380ACP cartridge in recent years, the P238 is a 6 + 1 single-action (SA) with a reliable cock-and-locked system. The gun is lightweight at just 15.2 ounces (empty), uses an aluminum frame, aluminum grips and a stainless steel slide. (www.sig-sauer.com)

Although introduced at last year’s show, Kahr’s diminutive new .380ACP, the P380, has just become available. Along with the P380, Kahr/Auto-Ordnance has also announced the opening of their new custom shop. In addition to custom work performed on customer-supplied pistols, they also offer two packages: the PM9 Black Rose Edition, which features a high-polish slide with engraved logo, and the Presentation Grade M1911, a polished blue .45ACP with nickel silver accents. (www.kahr.com)

Taurus, which consistently comes up with cutting-edge guns, has taken the sub compact .380ACP concept a step further by streamlining it. The new 738 TCP (Taurus Compact Pistol) is the lightest weight firearm Taurus has ever created. Tipping the scale at a mere 8.5 ounces (empty), the TCP is built on a durable polymer frame and uses a titanium slide. It is also offered with a stainless steel slide that increases weight to 10.2 ounces.

For 2009 Walther decided to one-up its own historic success with the new PK380. If you ever wished the nifty .22 caliber Walther P22 could be kicked up a notch to a .380, then your wish just came true. Nearly the same size as P22, the PK380 offers 8 + 1 capacity, an ambidextrous magazine release, DA/SA trigger, an ambidextrous safety, steel slide and frame (with a contoured polymer grip) and an integral Picatinny-style accessory rail. Not only is the PK380 a well designed firearm, it is quite possibly the first true heir to the Walther PPK. The Walther PK380 is available in four variants: the First Edition Model, the two-tone model with nickel-plated slide; the standard all-black frame and the PK380 Set (all-black with laser). (www.waltheramerica.com)

Originally a one-off created by pistolsmith Bill Laughridge, the M2008 Pocket Model is a masterpiece of styling and engineering. Patterned after Colt’s 1903 .32 ACP, the M2008 is a “hammerless” .45ACP that combines the power of the M1911 with the grace of the old pocket pistols. The M2008 is an elegant, potent reminder of what the original pocket autos could have been, but never were. It’s made to customer specifications, and only fifty will be made per year. (www.cylinder-slide.com)

WonderPolymers
Glock added three new models to its already extensive lineup this year, the first being the G22 RTF2, (Rough Textured Frame) that features crescent grooves in the back of the slide to aid in chambering the first round, and new raised polymer spikes on the grip sides, backstrap, in the finger grooved front strap and on the thumb. It gives this new Glock a very tactile feel.

Glock’s popular SF configuration is available in a 10mm with the G20SF and G29SF pistols. There is also an interesting option for the G20SF, a 6-inch hunting barrel that can be quickly swapped out using the field stripping procedure. (www.glock.com)

Taurus’ new 24/7 OSS, available in .45ACP, .40 and 9mm, was designed and built to exceed all requirements originally set forth by the US Special Operations Command (SOCOM) for its new sidearm. It features their new Single-Action/Double-Action trigger system. Firing normally from SA mode, if the primer ever fails to ignite, the gun reverts to a DA mode to provide a second or third try at a faulty cartridge, giving the 24/7 OSS a failure-free reliability no other pistol on the market has matched. 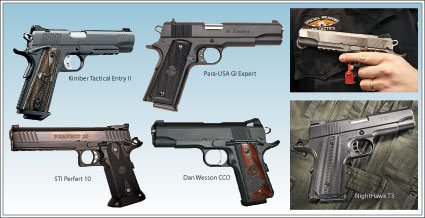 Introduction of Smith & Wesson’s TFP .45, so named because it has no firing pin safety, instead relying on a lightweight titanium firing pin to avoid impact-related discharges. A proven way to enhance the safety of the lockless “Series 70”-style 1911, it’s interesting to see the add-on safety stepping out, not with a bang, but a whimper. Also new in their 1911 line is the stainless steel full-size Pro Series and a pair of scandium-framed compacts: the 1911 Sub Compact and Compact ES.

Among Kimber’s offerings this year is their expanded line of Tactical II pistols, which now includes the Tactical Custom HD II light rail gun and the rail-less Tactical Entry II, the mid-size Pro and the compact Ultra. In addition to the standard .45ACP chambering, the Tactical Pro II comes in 9mm.

Due to popular demand, their lightweight, narrow-framed Aegis (which is available in all three sizes, but only chambered in 9mm), has received a hammer with a meaningful spur on it. And also new this year were two compact, stainless variants of their Raptor pistols, 1911s so distinctive their design was actually granted a patent. (www.kimberamerica.com)

Nighthawk’s new T3 Compact, is an Officer/Commander hybrid 1911 with a compact grip frame and mid-size slide/barrel combination. Originally chambered in .45ACP, it’s now offered in 9mm and .40 as well, and can be had in stainless steel, making it the first-ever stainless pistol from Nighthawk.

They have also continued their collaboration with famed pistolsmith Richard Heinie. In addition to the PDP .45 and Tactical Carry pistols that Heinie designed (and which carry his sights), last year saw the introduction of the aptly-named Lady Hawk, a Commander-sized 9mm built for those with smaller hands. This year, however, is something completely different: a 6-inch-long slide 10mm intended for hunting use. (www.nighthawkcustom.com)

Two new models from Para USA that caught my eye this year are both single stacks and single-action. The first, the LTC, is a 4.25-inch barreled, chambered in 9mm, a combination that has been appearing elsewhere this year. Their GI Expert M1911 is a bare bones, no frills .45 that debuts at a lower price point than their other factory custom pistols. Aside from the obvious cost advantages, this allows the buyer to take a step back to the way custom .45s used to be built.

Let’s also not forget that Para offers a pair of Gun Rights pistols, and makes a contribution to the NRA Institute for Legislative Action every time one is purchased. Considering the current political climate, a donation to the ILA is an investment in our future freedoms, whether you make it through the purchase of a Para pistol or not. (www.para-usa.com)

At long last, Colt has introduced a tactically oriented M1911 with a light rail. Appropriately named the “Colt Rail Gun” and made with a forged slide and frame, the new .45 also features a National Match Barrel, S&A beavertail, extended strong-side-only thumb safety and a Novak LoMount rear sight.

Colt has also brought back two other Government Models: the Combat Elite, which is similar to the Rail Gun, only lacking the rail, and the Special Combat Government Model. Both are built in the Colt Custom Shop and including some premium aftermarket parts. Another impressive piece from the Colt Custom Shop is their Presentation Grade M1911. Beginning with Colt’s vintage-style 1918 pistol, the gun is engraved at 25% (or A Level) coverage by one of Colt’s Master Engravers. (www.coltsmfg.com)

The Dan Wesson line of 1911s has seen the introduction of their DW CCO, a Commander/Officer’s hybrid 1911 in .45ACP. The lightweight aluminum frame has a chain link pattern machined into the frontstrap to give added purchase. In a world where concealed carry is increasingly popular, and increasingly important, there are few better-sized 1911 .45s than this package. (www.cz-usa.com) 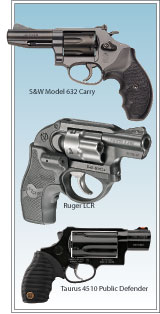 Revolvers
With the initial success of Ruger’s compact LCP (Lightweight Compact Pistol) .380ACP, we hadn’t expected the company to come back one year later with another lightweight compact model, but it seems the engineering department had one more idea to try and for 2009 introduced the LCR (Light Compact Revolver)! In the world of revolvers, this gun can only be accurately described with one word: innovative.

Smith & Wesson’s new revolvers include Model 623 Carry Comp chambered in .327 Federal Mag. Also in their Classics Series, which now accounts for nine models in 29 versions, the latest is the resurrection of the Model 14 chambered in .38 S&W Special +P.

An unexpected new gun this year is the Taurus Model 4510 Public Defender, a smaller frame, snub nose, semi-hammerless version of the Judge .410 gauge revolver. This lighter, compact model chambered for 2.5-inch .410 shot shells as well as .45 Colt ammunition is built on the Taurus Model 85-sized frame. The five-shot combo gun, small enough for concealed carry or home protection, has a specially rifled barrel finely tuned to spread the shot pattern at close quarters or to guide the bullet to the target. (www.taurususa.com)

Others
Vltor, largely known for their AR components, including their versatile, cleverly designed Modstock, Vltor announced their Fortis pistol at SHOT. Available in 10mm or .45ACP, the Fortis is a dead ringer for the distinctive Bren Ten pistol that introduced the 10mm cartridge. The new Fortis is poised to be a much more successful pistol than its ill-fated forebear. (www.vltor.com)

Perhaps one of the most under-estimated firearms manufacturers in the world, CZ-USA has introduced two new variants of its well-proven CZ-75. The first, the SP-01 Phantom, is a polymer-framed variant of their light-rail-equipped SP-01. In addition to having a lightweight grip frame that holds 16 + 1 rounds of 9mm, the Phantom has an interchangeable backstrap system that lets you fit the gun to the shooter’s hand. Also in the lightweight class is their P-07 Duty, a 16 + 1 9mm with a newly designed trigger system. Although it comes with a decocker installed, it also comes with a traditional safety, and can be converted with a simple parts change. (www.cz-usa.com)

SIG SAUER debuts their P556. Patterned after their 556 line of high-tech rifles, the P556 is a handgun variant with a short, 10-inch barrel. A truly formidable weapon for such tasks as vehicle defense, the P556 comes with a miniature red dot sight, and can be had with either a traditional polymer forend or as the SWAT variant with an alloy rail forend.

In addition to their Blackwater line of pistols, they have also introduced .22LR variants of their popular P220, P226, and P229, for which they began to offer rimfire conversion kits last year. Several other special-purpose models made it into the catalog this year, perhaps the most interesting of which is their P226 Dark Elite, a compact service pistol equipped with a beavertail, adjustable night sights, and a suppressor-ready threaded barrel.

European American Armory, of course, had their full line of Witness pistols out. Available in steel or polymer frame, in 9mm, .38 Super, .40, .45ACP and 10mm cartridges in full, carry or compact sizes. Their Gold Team, Limited and Limited Pro are competition ready right out of the box, while their Stock 1 and Stock 2 are designed specifically for IPSC Production Class. The Witness Hunter in .45ACP and 10mm is perfect for hunting or long-range shooting. (www.eaa-corp.com) 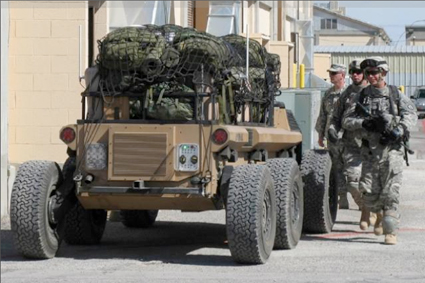 Little guns are making a big impression this year. Never has so much…