The 2012 MidwayUSA & NRA Bianchi Cup was another great match. Over 200 shooters came to Columbia, Missouri, for a week of shooting, practicing and, most importantly, spending time with fellow shooters. Because of this match’s great history, there are threads that connect each season to the next: friends see each other once a year, connected by their shared experience in the challenging courses of fire; there are banquets, social events, laughter and tears; national championships are won and lost on the weight of a single trigger pull; and many shooters discover their true character and skills. All of this is set against the backdrop of one of the nation’s most significant matches.

For those unfamiliar with the Bianchi Cup, it can seem very simple at first. It is the national championship for NRA Action Pistol—a unique shooting sport sanctioned by the NRA, which combines elements of USPSA, bullseye and PPC shooting into one sport. The Cup itself consists of four stages, each worth a maximum of 480 points. The target is a cardboard tombstone divided into four scoring zones. The best zone is a 4-inch circle at the center worth 10 points and an X-ring hit. Next best is the 8-inch ten-ring and a 10-inch circle worth 8 points. The remainder of the target is worth 5 points. The rules are simple: the best score wins, and if there is a tie, the number of x-hits breaks the tie. All strings of fire on each stage are shot against par times, giving the shooter a fixed amount of time to get their rounds on target. But this only appears to be simple. In the words of BJ Norris, current World Steel Challenge champion, USPSA grandmaster and Bianchi Cup competitor, the “Bianchi Cup is very technical and extremely difficult.” 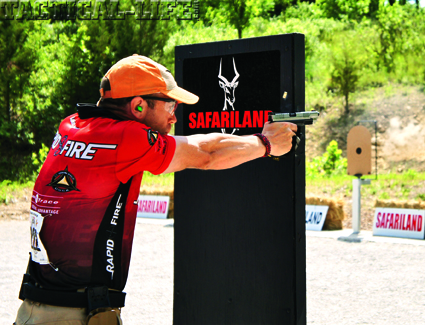 Iain Harrison, winner of “Top Shot: Season 1” and host of “Rapid Fire” on Outdoor Channel, takes his shots on the Barricade.

The game has three divisions, each competing for their own title. The Open division is a full-on anything-goes gun race, in which optics, wings, compensators and so forth are permitted. The Metallic division does not permit optics, wings or compensators, and your firearm’s trigger pull must be more than 2.5 pounds. The Production division is designed for production firearms, does not permit single-action-only guns such as 1911s, and requires that your firearm’s trigger pull be over 3.5 pounds. Each year, the Bianchi Cup also crowns a national Ladies, Junior and Senior champion.

The rules, regulations and scoring create the conditions for bringing out what is truly great about the Bianchi Cup: The people. Without the hundreds of shooters who attend this match, the site would just be another empty range waiting to be converted into another useless golf course for boring people to whack little balls on.

B.J. Norris shot his first Bianchi Cup in 2009. “I didn’t know what to expect,” he related, “because even though I’d been told about the match and how hard it was, I wasn’t really prepared back then for the level of accuracy involved.” In 2012, B.J.
returned to the Cup after taking a year off to pursue other shooting goals. While he’s one of the best shooters on the planet, no one expected him to challenge for the Production division’s title. At the 2012 match, he put together a solid performance that, on the second day, had many considering him the dark horse. Then on the final day, he had a rough match that took his prospects of winning. However, B.J. brought home a top-10 finish that was in of itself an excellent example of training and perseverance—but there was even more. On the second day of practice, it was obvious that B.J.’s wheelgun had timing and trigger issues and wasn’t consistently putting rounds where they needed to be. One of the shooters at the match, a renowned revolver gunsmith, helped fix B.J.’s gun—not for profit, nor any reason other than simple kindness. This is what makes the Bianchi Cup great. 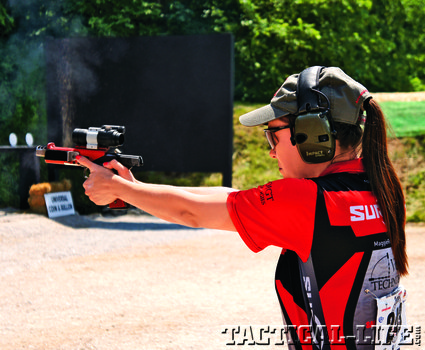 The match itself was full of great stories. In the Production and Metallic divisions, there were seesawing battles between some of the world’s top shooters. No one shooter took an early lead—each champion was decided on the last day. On the final day of the Production competition, the race came down to three shooters who were within 8 points of each other: Rob Leatham and Vance Schmid, both former Bianchi Cup champions; and Enoch Smith, who finished second in Production has been a contender ever since his first Bianchi Cup. Competition started with Vance and Enoch tied at 1,407 points each. Bruce Gray, another past winner, was leading the pack at 1,412 points, but three missed plates cost him his shot at the title. Rob was still in the running at 1,403, but to win he needed a poor performance by Enoch on the Mover event and by Vance on the Falling Plates event. With everything on the line, Rob shot 476 out of 480 possible points on the Moving Target, just 4 points shy of perfect. Enoch stepped up and bettered Rob’s score by 2 with a total of 478 points. Because Enoch’s score was just 2 points shy of a perfect 480, Vance needed to shoot all 48 plates on the Falling Plate event to hold for the win—one dropped plate, and Enoch would be the champion. Vance did not drop a plate. Going 48 for 48 on 8-inch steel plates at 10, 15, 20 and 25 yards is no mean feat. With the pressure on, Vance brought home his first Production championship and his third win at the Cup.

A similar battle took place in the Metallic division. On the last day of shooting, Phil Strader had a one-point lead over Robert Vadasz, who in turn had a one-point lead over Bruce Piatt. Bruce and Robert are both former champions as well. Phil shot the Practical event, where shooters engage static targets all the way back to 50 yards. On Friday, Bruce and Robert finished shooting the Mover, where a single target must be engaged from 10, 15, 20 and 25 yards while the target moves from left to right (and right to left) at 10 feet per second. On the Mover, Robert and Bruce shot 476 points—Robert preserved his one-point lead. On the Practical, all Phil needed to do was shoot a 475 or better, but he had some tough shots and turned in a 469, dropping him below Bruce for a solid third-place finish. Robert Vadasz took another Metallic division win.

The Open division saw another win from Doug Koenig, continuing his division dominance for another year. In the Women’s division, Julie Golob reclaimed the title from last year’s champion, Jessie Harrison-Duff. Most notably, there were hundreds of shooters fighting their own personal battles. Some came out to the match to beat a personal best, while others came for the first time to discover what the Bianchi Cup was all about. And they all shared something in common: that week in Columbia, Missouri and the wins, losses, emotions and friendships. This is what makes Bianchi Cup one of the greatest matches in the world. For more information, please visit nrahq.org/compete/nm_actionshooting.asp or call 703-267-1478.