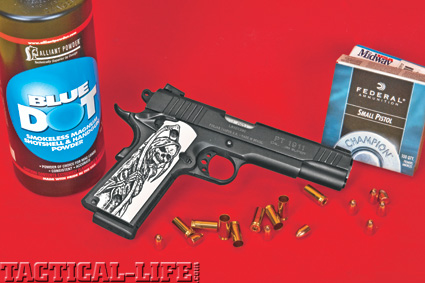 The .38 Super has had a rocky history. If it hadn’t been for one incredibly bad decision, I think it would have been a more popular chambering in this country that the 9mm round. When the .38 Super came out in 1929 as a chambering for the Colt 1911, it was offered as a high-velocity replacement to the anemic .38 ACP cartridge. With impressive 1,330-plus feet per second (fps) velocity propelling 130-grain FMJ bullets, during those pre-.357 Mag days, the .38 Super was the only cartridge that could pierce Prohibition-era body armor and car bodies. As such, it saw some law enforcement use. Frank Hamer, the retired Texas Ranger who tracked down Bonnie and Clyde, was reported to be a .38 Super shooter.

For years the author reloaded .38 Super on a single stage press using an RCBS three-die set. When he moved to a turret press he added a Lee Carbide Factory Crimp die to the set and exchanged the RCBS expander die for a Lee version so he could charge powder right through the die.

Accuracy with the early .38 Super guns ranged from mediocre to just plain awful. And, with the introduction of the .357 Magnum later in the decade, the .38 Super largely faded from the scene here in the United States. It remained popular in Latin America as the only legal 1911 cartridge in countries that banned the civilian use of military cartridges like the .45 ACP.

The .38 Super is a niche round these days. That’s a shame because it is an almost perfect self-defense round, and a great field round to boot. 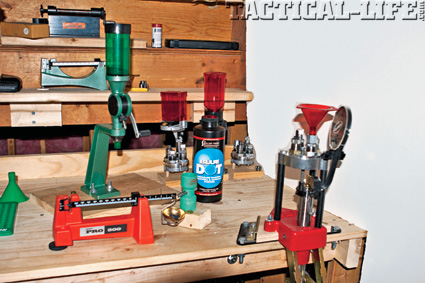 The author started with an under-weight charge thrown by an RCBS Uniflow measure. He followed with a Redding powder trickler and scale to reach the proper charge weight when reloading .38 Super.