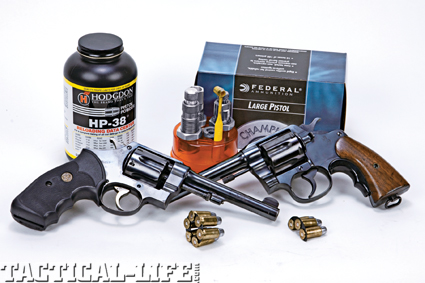 It doesn’t take a long equipment list to reload .45 ACP cartridges for revolvers; an appropriate powder, a carbide .45 ACP die set and large pistol primers. Just add bullets and you are good to go.

My favorite defensive revolver cartridge just happens to be the same as my favorite defensive autopistol cartridge—the .45 ACP. All the things that make it a great self-defense round in a 1911 are just as valid in a revolver. It is a hard-hitting, big-bore cartridge that delivers superior knockdown power without the over-penetration risks attendant with magnum revolver cartridges. It has the added benefit of having any number of proven man-stopping commercial loads that are widely available on the market place.

Revolvers for .45 ACP have been around for almost as long as autoloaders, and they have the same military pedigree. As we went into World War I, Colt couldn’t meet the military demand for their 1911 autoloader. The army approached Smith & Wesson about developing a revolver for the .45 ACP military round. The problem was getting the rimless .45 ACP round to eject from a revolver. The .45 ACP cartridge, in an autopistol, headspaces on the case mouth. While it is easy enough to chamber a revolver to headspace on the case mouth, without a rim there’s no surface for the extractor on a DA revolver to bear against and kick out empties.

Moon Clips
Joseph Wesson solved that problem by developing the half-moon clip, which held three rounds of .45 ACP and provided a surface the star extractor could bear against to eject the fired cases. This arrangement necessitated machining down the rear of the cylinder to provide enough clearance for the spring steel moon clips. The original half-moon clips work, but they aren’t as easy to load or unload as the modern, six-shot full-moon clips. Full-moon clips are the fastest way to reload a .45 ACP revolver. They are like speedloaders—and like speedloaders, I find that they are really too bulky for concealed carry. For that I prefer the double moon clips. These are little clips which each hold two .45 ACP rounds. They can be dropped into your pants pocket, where they lay flat, and they load twice as quickly as individual bullets. I often carry my S&W 1917 in a Galco vertical shoulder holster that has two-ammunition dump pockets under my right armpit. I keep each dump pocket filled with six Federal 230-grain, Hydra-Shok, jacketed hollow point rounds loaded into three double moon clips. They store flat and load fast.

Flip It And Zip It! | Folding Outdoor Knife