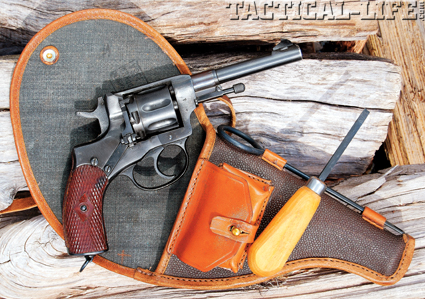 The Russian 7.62 Nagant gas seal revolver, first issued in 1895, served in both WWI and WWII. Note included holster and accessories.

Hundreds of thousands of metric tonnes of steel and literal boatloads of metric calibers have been hauled out of dusty warehouses and exchanged for U.S. dollars over the past 40 years. Some, like the Mauser rifles or the Luger pistols, are very well known and extremely popular. Many in that same category can be extremely expensive collectibles and are best not fired much, if at all. But, there were (and are) two reasons for the continuing interest in military surplus firearms from around the globe, and owning a piece of history is only part of the game. For many beginners, a relatively cheap surplus rifle or handgun can also be a less expensive entry into the shooting world. Traditionally, a hundred-dollar Mauser has been much easier to afford on a first deer hunt than a new $500 commercial rifle, and for those with the money, a beat-to-hell Mauser has also made a fine base for a custom product that’ll rival most of the new and shiny major name offerings in the racks at your local dealer. 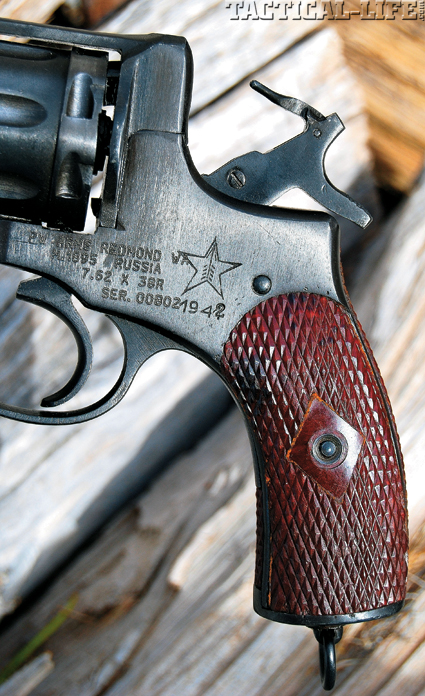 Note the long firing pin required due to the forward shifting nature of the cylinder in the Nagant.

Handguns have somewhat followed rifles in the shadows; most used European ammunition that wasn’t quite as easy to find locally as the more common Mauser calibers, for instance. But interest has still been high, and importers have thoroughly scoured Europe to the point where stockpiles of both obsolete arms and ammunition for them are pretty much cleaned out. What used to be hundred-dollar rifles are now $300 to $500 rifles, and surplus ammunition to shoot in them is drying up.

Among the many Makarovs, Radoms, Walthers, Tokarevs, Lugers, and so on that get more of the attention, there still happens to be an ugly little piece of ordnance available that served a major military power as one of its most widely issued sidearms for over 50 years: The 1895 Nagant in 7.62x38mmR. Not only is it available, it’s downright inexpensive.

The real deal from those who lived through it!

The Russian 7.62 Nagant gas seal revolver, first issued in 1895, served in both…