I had recently discovered Glaser Safety Slugs as a way to “power up” a smaller caliber weapon and was loading my .38 Special and .25 semi-auto backup with them.

Dealing one-on-one with the public, as in my employment at the time (full service gas station manager) does, by its nature, calls for less-than-large carry guns.

By this time I had, over the years, been punched, cut and shot at some 16 times, and hit twice. I was soon this night to be shot again.
It was a cold freezing winter night, and when the man knocked on my locked office door, asking to call a tow truck, there was not much else to do but let him in, as our public phone was inside.

Coming through the door he put his hand in his coat. I put as much distance between us as was possible and said “You really shouldn’t come in a business at night with your hands in your pockets.”
“Why’s that?” he asked.

“Because there’s a lot of robberies at night,” I replied. “Well, that’s what this is,” says he.

The nasty part about being an honest regular citizen is that we have to be damn sure the crook indeed has a weapon, and is not just making empty threats.

It apparently never dawned on him that I might have a gun (of a size nicely covered by a shirt flap, as mentioned earlier), or he would have kept his mouth shut and just drawn. Hundredths, thousandths of a second, do count. As I verified the steel at the end of his arm, I made the fastest draw of my life. As his gun had already cleared, he had time to fire once into my arm. I got off two, the slugs breaking (I was told) his hip on both right and left sides. Down he went; but far from out.

Though he was in a still, belly-down position, suddenly, his right arm flies up, and the bullet misfires. I was obliged to shoot him in the ass!
Advice from my experience: stay away from back shots, juries don’t understand.

I’m saying: “Drop the gun!”, he’s saying:”No, just let me get out of here.” This is how people on Crack or Meth can exasperate you. They don’t always feel pain or stop their attack unless dead. My whole attention was on his gun position, so indeed, he did crawl outside. He somehow propped up on the office step and again tried to shoot me.

I shot low one more time at three feet, into non-vital fat, and pulled my .25 cal. backup out and pointed it right between his eyes. “Drop the gun or else!” Well, thanks be he did, because with four in him, a trail of blood to the outside, and one between the eyes, what would a jury of 12 of our peers understand?

As it all turned out, my wound wasn’t too bad, his had him using a cane, and serving 8-20 years. The judge declared him a “menace to society”.
—JO, PA 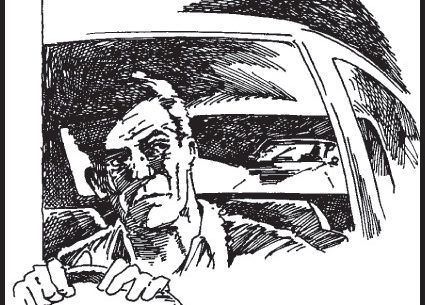