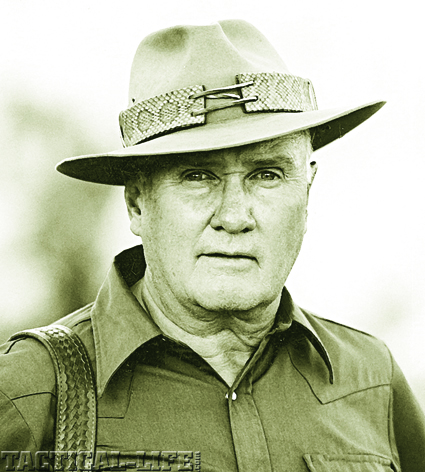 It has been suggested to me that we are very fortunate that our adversaries have not discovered the combat efficiency of the scout rifle. I do not think we have a problem here, because a hoplophobe can never discover the good qualities of any firearm since he does not want to think about firearms at all. The hoplophobe worries about buzz words like “assault-rifle” and “automatic-weapon,” and can never accept the fact that the weapon is the man and the firearm is just the instrument in his hands. With this in mind it is pertinent to observe that several recent army recruits have been told that the enemy they are preparing to fight is not the English, or the Spanish, or the Germans, or the Vietnamese, or the Chinese—but rather the good old boys in rural America who constitute an armed militia. The question arises, of course, as to how the unorganized militia, no matter what their politics or determination, can stand up for an instant against the United States Army. Well, let us hope it never comes to that, but if the army is teaching it, we had better realize that they are. The atrocities of the ninja are certainly beating us into an unpleasantly confrontational society, but if worse comes to worse, I think that we can assume that the private citizen who owns, cleans, loads and shoots his own personal weapon is a considerably more serious antagonist than the trooper who has to turn his weapon back in every time he uses it. This is probably the principle reason why socialists never cease their attempts to disarm the private citizen.

● There is a Marine Corps slogan to the effect that the purpose of a Marine is to do whatever needs to be done, to do it right, and to do it now. This notion can be extended to a much wider range of experience. If there is something you think needs to be done, get on with it now. No one has promised us tomorrow.

● Considering the recent biography of Butch O’Hare, just released by Naval Institute Press, we discover once again that the great aerial marksmen all got their shooting foundation while tramping farm and field with the family 22. O’Hare, and Joe Foss, and Chuck Yaeger, and Sailor Malan—not to mention Manfred von Richthofen, Eric Hartmann, and Ulrich Rudel—all got their start with a little 22 rimfire cartridge. Long may it crackle!

● Enemies of liberty in this country have been vastly encouraged by the re-election of the Billary Administration. They are sleepless and never let facts get in their way. The fight is always there, and it is up to us, the shooters of America, to keep the pressure on. The National Rifle Association of America remains liberty’s teeth. The organization is not perfect, but it is still the most powerful and articulate champion of personal and political liberty left in the world. If you do not like the way it is conducting its affairs—and I must say that there is an unpleasant amount of internal bickering apparent at this time—get in there and move to change it, but whatever you do, do not give up the ship!

● Our nomination for the 1997 Waffenpösselhaft award goes to the police carbine utilizing the 9mm pistol cartridge. Large numbers of people—especially those in public office—seem to have lost track of the idea that any firearm must strike a blow sufficient for the task. They seem to feel that as long as a hit is achieved the results of that hit are unimportant. Thus we were all wryly amused watching minor-power pistol bullets bouncing off the body armor of those two clowns in the Laurel Canyon shooting. The “V” in DVC stands for VIS, which is power. If you do not strike with sufficient power, neither speed nor precision will do you any good.

● On the subject of the .22 pocket pistol, obviously the .22 rimfire cartridge does not dispose of any considerable power. However, it will penetrate the skull of a human being (most of the time), and if it is properly placed, it may render good service. A pocket .22 pistol in the hands of a delicately constructed lady with slender wrists and modest musculature may indeed suffice as a personal defense weapon, especially when one considers that a defensive pistol serves its purpose more than half the time by its mere presence, regardless of whether it is fired or not. The .22 rimfire cartridge offers a larger opportunity for practice than any centerfire round. When the ladies and children of your household discover how much fun it is to plink with a .22 pistol, they may well practice enough to develop the sort of skill necessary to render the little gun quite serviceable for personal protection.

The leaders in this category for much of the 20th century have been the Walther PPK and PP—in caliber .22 LR. I now discover, to my dismay, that these little pieces are almost impossible to locate for sale in this country. Their clones, manufactured in Hungary and Turkey, are equally hard to come by. Many years ago when we were living in California I purchased four PPKs for distribution to various ladies in our immediate circle. I wish that I had bought 50 of them!

● I find it most curious that there are still people—even people of some cultivation—who object to the metric system. I discovered as far back as grade school that the metric system of measure makes sense, whereas the English system does not. In case it was not explained to you in your childhood, a meter constitutes one ten-millionth of the distance from the pole to the equator, measured along the curve. With that as a base, we proceed to convenient measurements such as a kilometer (1,000 meters), a millimeter (one thousandth of a meter), and so on. Measuring distances in feet, inches and miles seems to be just silly. I do remember from my Basic School days that there are 63,360 inches in a mile. Pretty fascinating?

● Do you know what the “Big Twenty” is? The Big Twenty is the placement of 20 shots in a 20-inch circle in 20 seconds at 1,000 yards. Old time target shots claim that this is impossible, but then for most of the 20th century it was held that it was impossible to run a mile in 4 minutes. 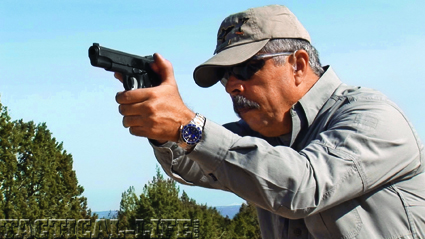