Remember the axiom that you are only “outgunned” if you miss. Only the old-timers among us remember the deserved adulation heaped upon Butch O’Hare, after whom the Chicago airport is now named. In his magnificent exploit he was the only Navy fighter plane available in the air when nine Japanese Betty’s were observed in attack formation heading for the Lexington battle group. These Betty’s were twin-engine medium bombers with rifle caliber machine guns forward and sideward, plus a 20mm automatic cannon as a tail stinger. The Japanese formation was a V of V’s flying very close together and protecting each other with their own guns. O’Hare was flying an F4F-3 armed with four .50-caliber Brownings and packing 200 rounds per gun. In plain sight he tore into that Japanese formation and destroyed five bombers before he ran out of ammunition and the fight broke up.

Let our current hand-wringing journalists observe that he was not “outgunned.”

Question for your next philosophy class: “Does competition automatically destroy ethics?” This would have been easier to answer one hundred years ago when we had a full allowance of gentlemen. Today it is somewhat more complicated.

● Principle: Competition is the most valid evaluator of technique, but only if it is relevant to the goals the technique seeks to achieve.

● The United Nations Organization proceeds to evolve from the silly to the sinister. As long as it just met and paid exorbitant salaries to flakey delegates from graustarkian countries, it was little more than wasteful, but now various of its members propose serious attempts to transfer national sovereignty incrementally to this bizarre agglomeration of ineptitude.

What hit us squarely between the eyes is the proposal that the U.N. step in and mandate the production, trade and transfer of small arms by its members. Now this is a line on which we must stand firm. When such nations as Japan, Britain, Australia and Canada presume to tell the United States that we should abrogate the God-given rights of our citizens the way they do, it is time to cry, “Halt!” The evil thing is that these international destroyers of liberty have a full share of advance men in our own camp—and unfortunately in some positions of power. The ultimate definition of political liberty is the right to keep and bear arms—the right of the individual to keep and bear his own personal arms. Without that right all other rights are meaningless. We must make that point clear to everybody on both sides of the argument—only thus will we make our enemies aware that we are very serious about what we preach. 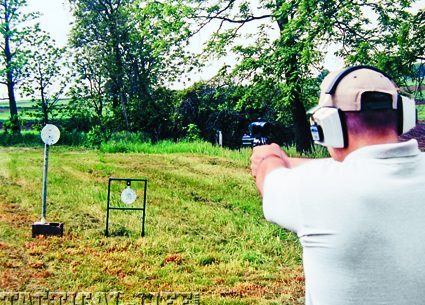 THRILL OF VICTORY AGONY OF DEFEAT

Remember the axiom that you are only “outgunned” if you miss. Only the old-timers…