In theory, one should acquire wisdom with age, but sometimes it seems to me that the older I get the more things there are that I do not understand. Among these things is recoil effect. When you shoot, your launcher bounces back in rough proportion to the momentum of the projectile and the weight of the weapon. We all know this and we accept it, but it seems to me that many people apply unnecessary concentration to what we used to call “fighting the problem.” It is true, of course, that a very powerful cartridge fired in a relatively light weapon will kick. This kick can be measured, and obviously it varies from one weapon to another, but within reasonable limits its effect is far more mental than physical. Fred Wells of Prescott, Arizona has been building very powerful weapons for many years, and I have fired a couple of them. Fred says that the effect of the recoil of the weapon on the shooter is 85 percent mental, and I am inclined to agree with him.

Recently a friend of mine, who is female and not at all used to rifle shooting, decided that she wanted to get a piece for her own use and was torn between the .308 and the 7-08. Somebody had told her that the 7-08 will kick less, presumably because its 7mm bore is smaller than that of the 30 caliber. If there is indeed any difference in recoil between the 7-08 and the .308, it certainly will be too minor for my friend to detect, yet she regards this choice of calibers as a major problem.

● It is long been a principal of ours that one is no more armed because he has possession of a firearm than he is a musician because he owns a piano. There is no point in having a gun if you are not capable of using it skillfully.

● I have heard both sides of the discussion about whether a big man is better able to absorb recoil punishment than a small, or vice versa. Pointless argument.

● At another point in Buckley, I was startled to find that the word “unalienable” as used by Mr. Jefferson in the Declaration of Independence, or “inalienable” as is more popular now, was used incorrectly in the Declaration. The proper word in that context is “alienable” since those rights are. We need to take legal steps to protect our rights, because they can be infringed upon if we do not take such action. Rights given by God may not properly be threatened by man, but they certainly can be improperly so threatened, and are.

● Note that the state of Louisiana has opened the season on “carjackers”—under proper controls, of course. The consensus of the legislature was that if someone chooses to approach a driver, gun in hand, that is sufficient reason to assume that he is a legitimate target. One commentator wailed that this amounts to no less than “a license to kill.” Well, sure. Carjackers are not yet an endangered species, but it is high time that we made them so.

● As our society decays, our principal objective must be the minds of the young people who, without properly indoctrinated parents, are at the mercy of an educational establishment that is out to get us. As a youth I was taught rifle marksmanship by the U.S. government. Such goings on are unthinkable today, so it is up to us to make sure that adolescents get the message from their parents. If you are not a parent yourself, find a kid who needs the message and show him the way.

● Let us all remember that though the Bill of Rights contains ten articles, it is one of those articles that makes the others possible. Thus, as Charlton Heston said in his great speech, the Second Amendment is first among equals. Let us all bear that permanently in mind.

● The everlasting problem for the shooter remains gunhandling. Of the three elements of shooting skill—marksmanship, gunhandling, and mindset—it is gunhandling that gives us the most trouble. The way people handled their weapons at the SHOT Show was enough to make one’s blood run cold, and many of these people are presumably “experts” in the firearms field. It would seem that while a great many shooters understand the four basic rules of safe gunhandling, they seem to think that the rules only apply on the range when under supervision. I have tried for decades to impress upon people the fact that the four rules are immutable and ever present. They apply at all times and in all circumstances. Somebody asked me what they were the other day (somewhat to my dismay), so for the purposes of those who came in late let me put them forth again now.

Rule 1—All guns are always loaded. The only exception to this occurs when one has a weapon in his hands and he has personally unloaded it for checking. As soon as he puts it down, Rule 1 applies again.

Rule 2—Never let the muzzle cover anything you are not prepared to destroy. You may not wish to destroy it, but you must be clear in your mind that you are quite ready to if you let that muzzle cover the target. To allow a firearm to point at another human being is a deadly threat, and should always be treated as such.

Rule 3—Keep your finger off the trigger until your sights are on the target. This we call the Golden Rule because its violation is responsible for about 80 percent of the firearms disasters we read about.

Rule 4—Be sure of your target. You never shoot at anything until you have positively identified it. You never fire at a shadow, or a sound, or a suspected presence. You shoot only when you know absolutely what you are shooting at and what is beyond it. 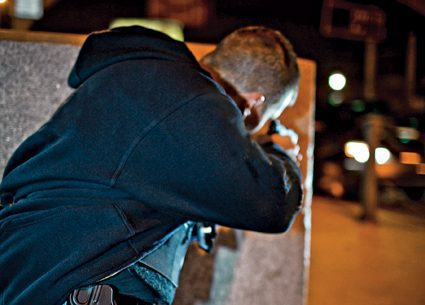 In theory, one should acquire wisdom with age, but sometimes it seems to me…