In studying the matter of a rigid glass with all adjustments in the mount, we come up into the rarified study of “spherical sections.” We were introduced to spherical sections in our college math studies, but the subject did not take. Fortunately I have access to technicians who understand such things.

● Television commentator Tom Brokaw has offered a curious analysis of what may be called “generation diversity.” In one instance, an elderly gentleman was complaining to a social scientist about the mindless vandalism of young people who take it upon themselves to smash property just for laughs. The latter was inclined to minimize the perniciousness involved as simply the normal exuberance of youth. The plaintiff was asked, “Well, what were you doing when you were 17?” The answer, “I was fighting on Guadalcanal.” Yes, Virginia, there is a generation gap.

● Current jargon holds that a “hot burglary” is one committed when the resident of the dwelling is at home—a “cold burglary” when he is not. Since the disarmament of the British public, hot burglary is up 50 percent—as opposed to a steady 13 percent in the United States.

● We see that Canada’s [former] Foreign Minister, Lloyd Axworthy, feels that the priority for the United Nations should be the adoption of a global convention prohibiting the international transport of small arms—to anybody except government. Here we have a senior and important official of a significant nation unashamedly flaunting the face of tyranny. In his view, nobody but governments should have access to arms. We all should trust governments—right? 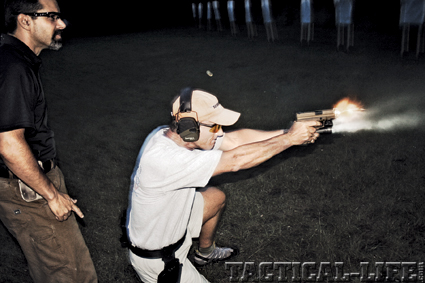 In studying the matter of a rigid glass with all adjustments in the mount,…