It is amusing to hear some of the culturally deprived types maintain that “no one needs an assault gun.” According to the founding fathers, all adult males are members of the militia, except for a few public officials. As members of the militia, we need to be checked out on the M16. This piece is not my idea of a good gun, but it is the official personal arm of the U.S. Armed Forces, and it is our business to understand it. Thus, we have need of it, whether we like it or not.

● We note the appearance of a Ruger Super Red Hawk in .454 Casull. This is a mighty instrument, if hardly one I would select for house defense. The late, revered Uncle Elmer once built a peacemaker for the .45-70 cartridge, and I am told it worked very well, though what you would want one for is somewhat obscure.

● Now that we have the Scout, after all these years, it appears necessary for some people to proceed to trash it up. The piece as originally issued was not perfect, but it was quite close. The fact that it is unavailable for left-handers is its principal drawback, and that is not a drawback if you happen to be right-handed. Apart from that, the action could stand improvement by relieving it for inspection with the little finger. It does not need sling sockets on the wrong side. And, of course, there is the matter of the perfected sight system, of which there is no promise at this time. I understand that manufacturers are peddlers first and artists second. With that in mind, I am still delighted with the way the Steyr Scout turned out. It will continue to dominate our training sessions here at Gunsite, and in due course people will understand that it is not “just another rifle,” but rather a conceptual leap forward. This will only be understood by serious practical shooters, and there are not enough of those at this time.

● A firsthand account suggests that the state of Connecticut is now totally overrun with whitetail deer. They will not let you shoot them so you have to kill them with cars.

● In rifle work group size is of some interest, but it is by no means the critical consideration that some commentators seem to deem it. It is well to remember that a rifleman does not shoot groups, he shoots shots. A tight group is nice, but one must not fall into the error of PII (Preoccupation with Inconsequential Increments). I have shot a great deal in a long shooting life, and I have only once encountered a rifle that would not shoot better than I could shoot it. (That was a .32-20 lever gun, which had been allowed to rust and then scraped out. In getting the rust out of the barrel, most of the rifling went along with it.) Group size is unimportant, unless it is very bad. If you can hit a dinner plate, first shot, every time, under all conditions, at 100, that will do. 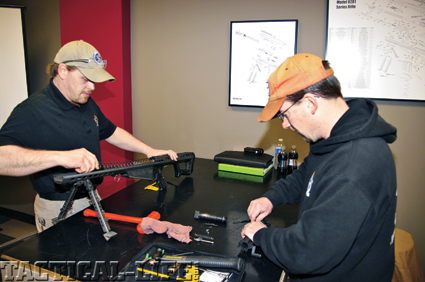