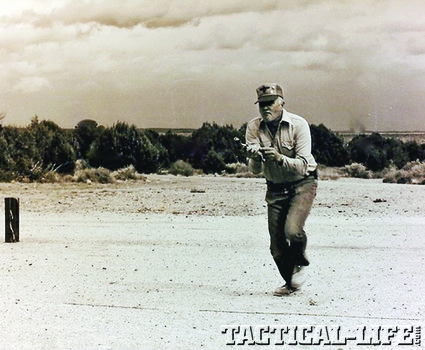 What we mean by the words we use is always a matter of debate. We are free to speak as we wish, and precision in communication is not required by law. It does, however, make life easier for everyone. Take this matter of “instinctive” shooting. Instincts are what we are born with, and they cannot be taught, nor do they need to be. We do not need to be taught to drink when we are thirsty, nor to come in out of the cold. We can, of course, train our muscles and nerves into certain patterns which are generally referred to as “reflexive.” Thus it is mildly annoying when an adventurer says that he snapped off an instinctive shot in the gloom. Unsighted fire—which is what is usually meant in this regard—may indeed be learned, and with enough time and effort it may become astonishingly precise. But it is not instinctive. Reflexive unsighted fire may be more rapid than sighted fire, but not necessarily so. I ran into these discussions solidly many years ago at the FBI Academy at Quantico. I had seen the efforts of the aspiring hotshots of the Southwest Pistol League in California and I knew that controlled fire, as delivered by a real expert, was every bit as fast as the proverbial hip shot, as well as being more precise. I could not convince the man in charge, of course, because he was committed to an idea that would have been painful for him to abandon. Reflexive shooting, miscalled instinctive, can be very effective indeed, but it calls for talent, determination and an enormous amount of practice. In matters of killing power, it is simply not worth the effort.

● A family member recently had a collision with a javelina near Benson, Arizona. She hit the pig hard enough to fire the air bag in her car, which caused more damage than I would have believed, blowing out the windshield, as well as part of the dash. I had the impression that it would take more of an impact than a pig can supply to fire off that gadget, but there was the pig, and there was the car, and no other parties were involved. In our opinion, air bags should be optional.

● As the years pass we note an unmistakable softening of what might be called the national character. This is not only apparent in the press, but even in our clients here at school. Perhaps—horrible thought—we need a full sized war to stiffen our collective spine. Hardness of spirit, hardness of muscle, hardness of heart are essential elements of cultural survival, and they don’t seem to be what they were—even 20 years ago. Our athletes do wonderful things, but they are encouraged to cry “Time out!” when pressed. I am told by “new soldiers,” even Marines, that what once was considered normal disciplinary procedure is today held to be legally reprehensible. During my own tour as company commander I never once sent a man before a court. I didn’t need to. I had sergeants. How today’s captains proceed without sergeants is beyond me. However I am told that there exists a “warrior underground,” surreptitious but pervasive, that may save us, despite the advertised spirit of the times. It may be swimming against the tide, but it is said that you can’t keep a good man down. It is to hope!

● As the after-action reports keep coming in, we notice that most defensive shooting situations take place under circumstances, which do not call for expert marksmanship. Of course the shooter must know the fundamentals of hitting a target, and he must know correct gunhandling, but in a street fight he is almost never called upon to shoot with match-winning precision. What he needs in a gunfight is control of his nerves, or what we call the “combat mindset.” It seems clear that when faced by deadly threat the primary requirement is self-control. It is, however, important to note that such self-control is more available to a combatant who knows that he can always hit what he aims at. Thus we teach elemental basic marksmanship for a couple of days before we introduce the student to combat simulation. When that red flag flies, all you really need to concern yourself with is a clear picture of your front sight and a compressed surprise break. That’s all. It does not come naturally. It is never “instinctive.” It is a programmed combat reflex, and that we can teach.

● A recent correspondence concerns the question of why we shoot. As a nerve exercise, shooting is no more complex than billiards or golf, but it does provide a satisfaction, which the other activities cannot offer. Now why is that?
It has been suggested that recreational shooting affords a sensation of control over one’s environment and that control grants a sense of power not otherwise obtainable. The lust for power may or may not be a good thing, but it exists in most men. It is better for us to understand it than to condemn it.

I began shooting at age eleven and thus I have enjoyed it for 70 years, which is a long time in which to enjoy anything. I think this enjoyment has been a good thing and it has served to overcome the customary feelings of inadequacy and insecurity encountered while growing up. In the one case I know of (my own), competence in firearms served totally to eliminate nightmares. Even as a kid I was never concerned about “the thing under the bed” because I felt I could cope with it. I have no idea how widespread this psychic phenomenon may be, but I do know that it works. The shooting master copes, and he is thus heavily armored against those anxieties that come from membership in the human race.

The subject is well worth discussion, but the dominance of fear is only one aspect thereof. The other element is fun. Shooting is fun. To most of us it is more fun than tiddlywinks, hopscotch or frisbee. We shoot because we like to shoot. In one incident in Household’s excellent novel The Dance of the Dwarfs, the communist thugs of the Colombian cordillera have braced the operators of the agricultural lab for questioning. The chief interrogator asks the girl, Chucha, “What is your job here?” Answer: “I am servant.” Question: “Do you sleep with the boss?” Answer: “Claro (of course).” Question: “Why claro?” Answer: “Because I like to.” That pretty well takes care of that. Why do we shoot? Because we like to. 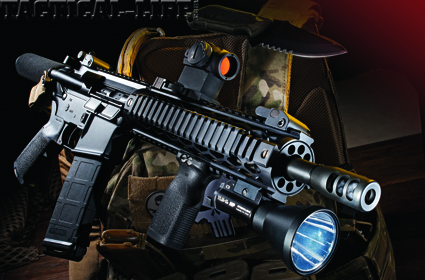 What we mean by the words we use is always a matter of debate.…