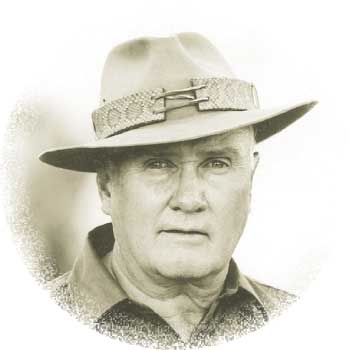 If you’re a shooter, and you don’t know who Jeff Cooper is, it’s time you did. Jeff was a doctor of weaponry, the inventor of the Modern Technique of the Pistol, and the authority of gun fighting and tactics.

“Gargantuan Gunsite Gossip” was originally conceived as an alumni journal for graduates of the American Pistol Institute, now known as Gunsite Academy. These commentaries provide information, entertainment, stimulation, and agitation, equally to shooters and the politically aware. They are neither gentle nor notably kind. On the other hand, they are both blunt and amusing.

Jeff Cooper, who passed away in September 2006, was a retired lieutenant colonel of Marines. He founded Gunsite Academy in September 1976, founded IPSC (International Practical Shooting Confederation), and was a member of the board of directors of the NRA and had many other industry affiliations. His writings continue to be enjoyed throughout the world. We are bringing you excerpts from “Gargantuan Gunsite Gossip” we feel are pertinent for today’s world.

ELECTION: Volume IV, Number 12, 1984
“It is only a week or so now ‘til election day, and while the signs look favorable we must not let up on our pressure for an instant. It is not enough for you to vote (though it is certainly essential), you must also convince another. The thought of a leftist victory at this time in history is so atrocious that it is difficult for us even to think about. It is not only the fate of the United States that is hanging in the balance, but that of the entire civilized world. We have been traveling extensively in the last couple of years and the idea that the revolution of 1980 should be turned back in ’84 is regarded with abject dismay by all those with whom we have visited, from the Orient to Central America to Europe to Africa to Scandinavia. We must not let it happen! Put forth your major effort now in the last few days. Everything else is secondary.”
NOTE: The intellectual property of Jeff Cooper is owned by Gunsite Academy and reprinted from Gargantuan Gossip 2 with their permission. Jeff Cooper’s books are available from the ProShop at Gunsite (928-636-4565; www.gunsite.com) and www.jeffcooperbooks.com

Wrong Side of the Tracks

If you’re a shooter, and you don’t know who Jeff Cooper is, it’s time…