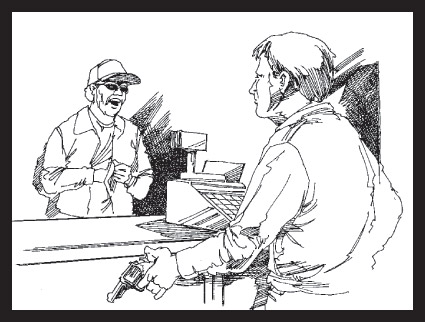 A SLICE WITH THE WORKS
Five years ago I was robbed while managing a pizza walk-in store. Not being armed left me with no alternatives but to let them have the money. The next time I was armed, but circumstances prevented me from drawing, namely a gun in my face. The third time was different; that person received a .38SPL hollowpoint for his troubles.

For those of you keeping score, that’s three robberies in six months, with the third being something of a happy ending. You might think that no one would bother us after that. Not so.

A few months later, it was just 9:00 PM and I was standing with my back towards the front counter, talking to an employee. It was a Thursday and business was beginning to taper off, when movement out of the comer of my eye caught my attention. A man jumped over the counter announcing a robbery and that he had a gun, and grabbed me by the shirt. My first reaction was, this guy had no sense of timing! I still had three employees on the clock, and two others were in the store.

Next, the would-be robber pulled us down to the floor, so that we would not be seen, while he sized up the situation. Most obvious to me was the fact that both his hands were full of the shirts of myself and one employee, leaving no room for any kind of weapon. It was at this point that I made my decision; all I needed was an opportunity, and then he gave me one. He directed me to go to the cash register to get him the money.

I had to turn my back to get to the register, and this was what I needed. I pulled my shirt up with my right hand and grabbed my Chiefs Special with my left hand. As I turned to face my target, I extended my arms. So far so good, except my grip was atrocious as was my too-excited trigger pull. It seemed like an eternity before the hammer dropped. After the windtunnel sound of the gunshot had swept through my head, all went quiet. I would later learn that the bullet had struck him in the collarbone.

He lunged forward under my extended arms, grabbing me low, just above the waist. As my hearing recovered I could hear him screaming. I tried to push him off me, but he was holding on for dear life. He wasn’t fighting for my gun but rather was holding on to keep me from shooting him again. I finally pushed him partially off me, unfortunately his weight took me with him. We ended up on the floor and I was on top of him and put my gun to his head. He was screaming, “Please don’t!” He was begging for his life, a most pathetic sight. I responded with, “Get the ___ out of here!” I still had employees in the store, and I knew he wouldn’t get far on his own, plus I wasn’t about to hold him at gunpoint. I let him up, and he bounded back over the counter, and ran out the door screaming like a child for his mommy. With his blood on my wrist beginning to dry, I dialed 911; the clock read 9:07. I told my employees to stay out of sight, as I told the dispatcher of my ordeal.

Later, a man fitting the sketchy description I gave the police showed up at a nearby hospital with a gunshot wound. It seemed hours before the forensics officer finished his work. Then came my time to clean the store up, so I could go home.

My own personal lessons from all this: Get a good grip. This would have allowed me a much better shot. The close proximity of my employee negated a second shot. If I’d had a better grip, then the first shot would have sufficed, then wrestlemania would not have resulted.
—MS, FL 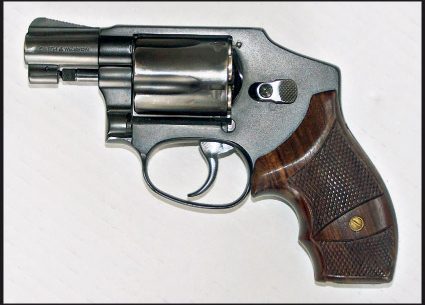