0
SHARES
10
VIEWS
Share on FacebookShare on Twitter
Built by Jeff Abernathy, this .40 Commander-size 1911 is a pistol capable of handling any defensive or competitive task with aplomb.

Have you ever wanted a top of the line 1911 pistol? I don’t mean some tricked out, full house, competition race gun, but one that was designed and built from the ground up—with no expense spared—for one purpose and one purpose alone: to keep its bearer alive? To do this it must be 100% reliable and capable of doing whatever one might require of it. Well, I recently was given the opportunity of testing just such a handgun. 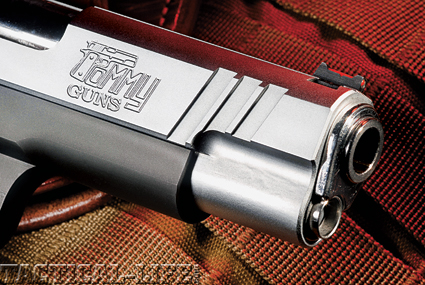 Jeff Abernathy is the son of the late Tommy Abernathy. Tommy was one of the most respected gunsmiths in the Southeast and over the past decades some of the finest examples of the custom 1911 I ever saw emanated from his shop—appropriately named Tommy Guns. Jeff himself was trained as a machinist and in the 1990s began working at his father’s shop where he became acquainted with many amateur and professional action pistol shooters including Todd Jarrett. 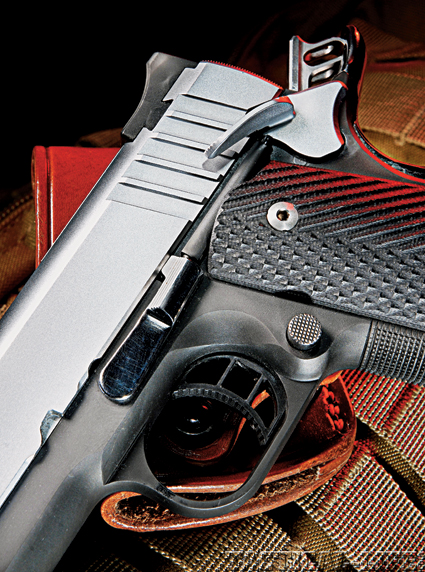 The custom 1911’s slide is hard chromed, while the frame has an Ion Black finish. Note the extended safety lever and magazine release.

“In 2007 Todd Jarrett called me and encouraged me to consider working for Para USA when they relocated to Charlotte, North Carolina,” says Jeff. “I did, and in November of 2008 I was the first person hired to help open their new manufacturing facility. Working closely with Todd at Para helped me further my knowledge of the gun industry. One day Todd asked me to build him a .40 single-stack 1911 pistol. Once the gun was complete, he shot it at the 2011 Single Stack Nationals and placed 4th overall. This helped me decide to leave Para in order to focus on building my own gunsmithing business.”