All About Revolver Grips 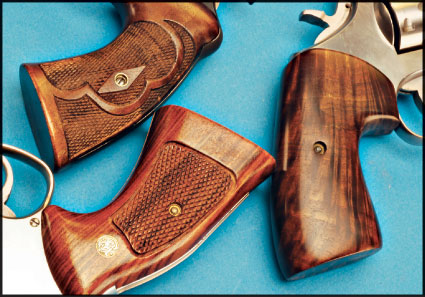 Somewhere in my accumulation of books and papers relating to handguns and their use, I have an early copy of Burning Powder by Doug Wesson. This is a little paperback book with a number of essays and articles relative to the use of handguns. Since the author was a descendant of one of the company founders, it is not surprising that the book centers on the products of Smith & Wesson. There were several editions of Burning Powder printed in the pre-war period, but something in one of them leads nicely into a discussion of the matter at hand. Wesson mentions, in talking about an early model, that the design criteria for the grip shape was intended to keep the revolver from being twisted out of the shooter’s hand in a close-quarters engagement. There is nothing mentioned about improving a shooter’s aim or ability to manage the gun in rapid firing. The basic grip shape for all S&W revolvers has been remarkably similar since the 1870s. To a similar degree, the same is true of the Colt line, not to include the Single Action Army. 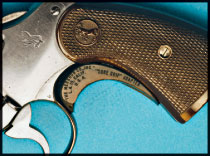 It is possible to improve the handling of nearly all handguns by changing the shape of the grip. Further, it is possible to make an improvement that adapts a particular handgun to the hands of a given shooter. In the case of the automatic pistol, a great deal of the gun’s shape is based on the need for a magazine that runs through the centerline of the receiver and almost always through the middle of the shooter’s hand. Revolvers differ in that they have their ammo supply in a centrally located cylinder, above and forward of the butt. For this reason, the revolver lends itself to modification in shape. Revolver butt sections—the actual steel frames—are usually small and need some well thought-out wooden or synthetic material panels to provide a better shape. It is surprising that the use of more hand-filling revolver grips was not widespread until the 1930s.