In 1968 I was a young lawyer and auxiliary police officer residing in a big city. After an exhaustive application and investigation process, and an 18-month wait, I received my License to Carry Pistol, which in those days was restricted to target shooting only. Consequently, my choice of firearms was severely limited and I selected a Smith & Wesson M15 Combat Masterpiece .38 caliber revolver with a 4-inch barrel and target sights.

One night I was returning from the shooting range with my wife. I wore the revolver on my strong side and I covered it with a light jacket. When we entered the lobby of our apartment building, I noticed a rough-looking guy seated on the window box in front of the plate glass window. He had a wooden broom handle cut down to about 4 feet in length with tape wrapped around the top end, which he tapped vigorously on the tile floor.

I ignored him, but kept him in sight, as I urged my wife toward the elevators, which were around a corner to the left. The guy with the stick got up and followed behind and a second guy with a baseball bat appeared in front of my wife and me. These punks obviously had mayhem in mind and probably thought they had a couple of defenseless victims to whom they could do whatever they wanted.

They had approached to about 10 feet on either side of us when I pushed my wife behind me with my left hand and drew the .38 with my right hand and raised it to the ready position. Before I could utter the word “freeze,” I heard one of them yell, “Holy Sh*t!” They both dropped their bludgeons and ran for their lives. I re-holstered and calmed my wife, explaining what had happened and that a probable assault, robbery and perhaps worse were thwarted because I was armed.

I held my fire because the threat was over as soon as I displayed my firearm and the use of deadly force was no longer justified. Furthermore, the location (marble walls and floor and a plate glass window) made the risk of a ricochet from a miss or a through-and-through shot too great. Had I been forced to fire in self-defense, I would not have hesitated, but I’m thankful that the mere presence of a firearm terminated the situation and I did not have to seriously injure or kill one or both of those morons.
—ASP, Internet 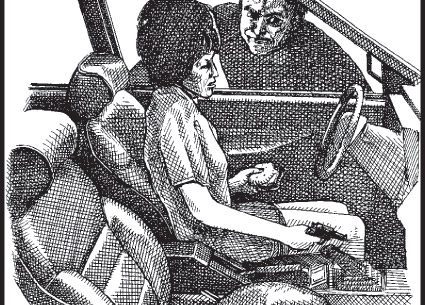