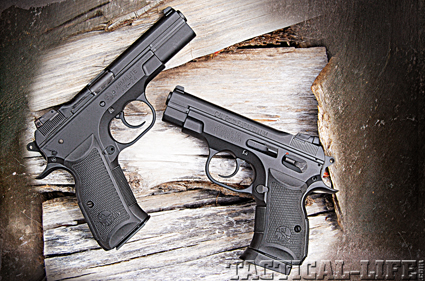 When ArmaLite announced the addition to the company’s line-up of a Turkish-made double-action 9mm pistol back in 2007, it drew a fair amount of interest—and not just because it was a new direction for the “rifle” company. The owner’s manual that comes with them tells you right up front that the AR24 is different, and refreshingly so. In our modern world of cheaper and lighter as a general trend toward new pistol design and marketing, the AR24 “…is a dramatic departure…” in that it’s something of a throwback to an older (and more expensive) school of thought. The AR24, in all variations offered by ArmaLite, is a steel gun—no aluminum anywhere, no plastic, no castings, no MIMs, and the only non-steel components on the pistols are the checkered black rubber grip panels. You get a fair amount of pistol for your money with these guns.

The AR24 is an amalgam of design elements old and not-so-old, borrowing from the much older French Model 1935 service pistol, the much more expensive SIG P210, and the much more common CZ-75 in widespread use around the globe. A double-action locked breech 9mm design having an external configuration very similar to the CZ-75, the AR24’s slide and frame rails are reversed from the familiar Browning pattern with the slide rails riding inside the frame rails instead of outside them. This interface between slide and frame was initiated by French/Swiss designer Charles Petter in the M1935 pistol and carried over into the P210. It’s long been considered a more accurate system by many—one that works at least fractionally better in keeping the rails from wearing quite as quickly, and one that also keeps gunk from getting inside by leaving no open longitudinal space between slide and frame. The platform across all AR24 models uses a double-stack magazine and a single-sided frame-mounted thumb safety with an internal automatic passive firing pin block that only allows the pin to move when the trigger’s pulled.

With no decocker on the AR24, the safety is a safety only, and in conjunction with the three-position hammer the pistol technically provides several carry options; including hammer fully down with safety on, hammer on half-cock notch with safety on, or 1911-style cocked and locked with hammer fully back and safety on. There are others, such as hammer in either fully down or on half-cock position without the safety engaged, allowing simple and instant use by merely pulling the trigger in a revolver-like manner, but those are a matter of individual (and informed) choice. The firing pin is a spring-loaded inertial type, which means it doesn’t rest against a primer when the hammer’s fully down, and the firing pin block should prevent the pin from moving forward if the pistol is dropped and lands on its hammer. But hammer down carry behind a loaded chamber on a centerfire pistol is generally not recommended, and ArmaLite also recommends against carry with the hammer on half-cock and the safety off. The safety can be applied with the hammer in any of its three positions.

Inside, the AR24 barrel’s rifling is cut, as opposed to button or hammer forged, and the barrel shows a deep muzzle crown. The pistols are finished with a military-grade non-glare matte black manganese phosphate under heat-cured epoxy for corrosion resistance, and they’re fitted with three-dot sights for high visibility and quick pickup. Grips on all models are wide hand-filling checkered rubber with marked palmswells, there’s a well-configured upswept beavertail to eliminate bite from the rowell-type hammer, and trigger faces are unserrated. 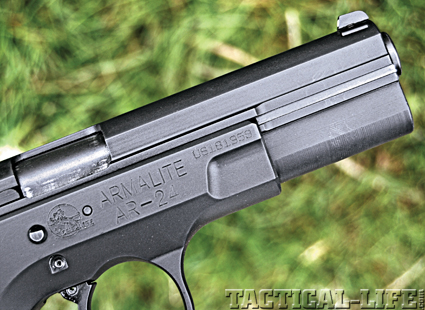 Both of the ArmaLite pistols use the older Petter-style slide/frame relationship, where the slide’s rails ride inside the frame rails.

ArmaLite’s added two new variations to the AR24 family. The company has offered both full-sized and compact versions as regular catalog listings for some time, but the newest AR24s are termed “Tactical Customs” in both frame sizes and add special features to deserve the names. While the main characteristics listed above remain the same, the differences lie in the sights and grip frames. Both large and compact AR24s use the same frame size, aside from the obviously shorter grip section that reduces the standard 15-round full-sized magazine to a 13-round capacity in the compact model. All other frame dimensions are the same, which means the same internal parts’ sizes and geometrical relationships. The slides and barrels are obviously shorter on the AR24K (compact), and it uses a dual-recoil spring where the full-sized gun uses a single spring. Both standard AR24 models feature fixed sights with luminous painted dots and serrations on the front and back of the grip frames. 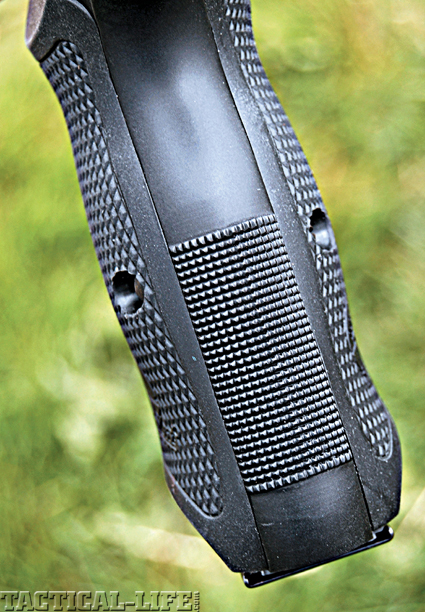 Between the checkered palmswell rubber grips and raised checkered steel panels, the grip configuration on both Tactical Custom frame sizes is one of these pistols’ strongest features.

The Tactical Customs are fitted with fully adjustable steel rear sights from LPA, a 30-year-old Italian firm that supplies quality steel sights to several of the largest names in the firearms industry. Oddly enough, the Tactical Customs sent for testing retain the luminous dot front blades of the standard models, but the LPA rear dots are not luminous. Still, non-tritium dots that require “charging” from a bright light source usually dim out quickly in the dark anyway, and the three dots on this combination work perfectly well together in most low-light situations. The dots are large enough and bright enough to line up fast, and the LPAs are angled to the rear to avoid hooking the support hand during malfunction drills. The LPAs also show very visible, painted white witness lines on top to see at a glance how far off dead center the rear blade is at any given point, which can be useful in easily making repeatable windage adjustments between different loads, if needed.
The other “custom” feature is the checkering on the frontstrap and backstrap. Standard AR24s use a less tactile set of serrations in those areas, cut into and below the steel surfaces. The Customs are machined with these panels actually raised above the surface of the gripframe, and with 20 lines-per-inch checkering and subdued points combined with the rubber grips, they create very positive no-skid zones exactly where they need to be—without being overly abrasive in the hand. I’ve not seen this approach in steel on any other pistol, and it’s another aspect of the AR24 Tactical Customs that would rise pricing on a comparable custom pistol made domestically. 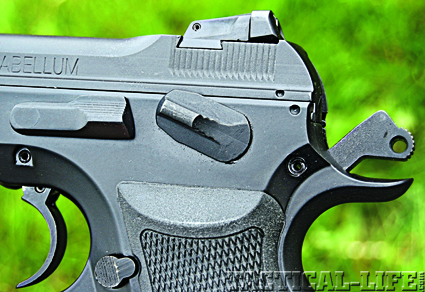 Well-placed controls, including the slide lock, frame-mounted thumb safety and mag release shown here, operate smoothly. Note disassembly line-up “‘divots’” at the rear. ArmaLite advises against carrying the pistol with the hammer at half-cock and on safey. The AR24 design allows multiple carry options, with a lowered hammer and safety off for instant DA use (above left). Another option is having the hammer cocked and the safety engaged for SA use (above right).

AR24s are shipped with a preservative lube, but ArmaLite’s manual recommends a breakdown and cleaning before firing anyway, with emphasis on removing oil from the bore and lubricating key points of metal-to-metal contact listed. Takedown is fairly simple; on an unloaded pistol with the magazine out and the hammer on half-cock, align the two witness dimples on the left rear sides of the slide and frame, remove the slide stop and run the slide forward off the frame. It takes less time to do it than to read it, and the barrel and non-captive recoil spring on its steel guide rod lift out of the slide easily. You may notice that the insides of the frame and slide are machined as well as the outsides, with no chatter marks visible. These pistols are well made.

Shooting Impressions
After cleaning and liberally oiling them, I fired both AR24s off my Outers Pistol Perch rest at a standard 25-yard test distance for accuracy in the gravel pit. A defensive pistol should easily handle a variety of commercial loads, and here those included seven factory loads in various bullet types and weights. ArmaLite suggests 124-grain bullets to be the best choice for the AR24s (my preference in the 9mm caliber also), and while the company says that the pistols are rated for +P ammunition it doesn’t necessarily recommend for regular shooting, saying +P pressures, “…will shorten the life expectancy of all handguns…” and “…should be limited to duty carry.” They leave it up to you. In the pit, the full-sized pistol started out with wide horizontal stringing that settled down as shooting progressed, and had one double-feed ejection malfunction, one stovepipe, and three occasions where the last empty brass in the magazine was left laying on top of the follower on slide-lock. The compact pistol left the gate without vertical stringing and finished the course with only one incident of that last-brass-left-on-the-follower peculiarity. I’d expect this to go away after the recommended 200-round break-in period, and even if it doesn’t, the empty drops clear during the reloading process anyway. A peculiarity, but not a deal-breaker. Surprisingly the smaller pistol was the more accurate of the two overall. 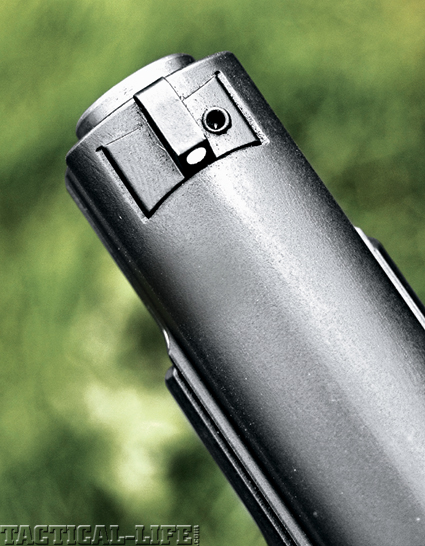 White dot sights are quick to pick up, and the dovetail mount provides more latitude for windage adjustment if needed.

These all-steel 9mms are no lightweights with the full-sized version coming in at roughly 7 ounces heavier than a comparably sized Browning Hi-Power, and the compact gun balancing out 1 ounce lighter than a Colt Commander (all four unloaded). On the belt that may be culture shock if you’re used to polymer or aluminum, but in the hand what I consider already tame 9mm loads were further reduced to pussycat levels when shooting. Accuracy was acceptable with the right loads in both AR24s, and while both triggers showed minor creep in breaking at 5 pounds in SA mode, both were smooth in DA mode with very minor stacking toward the end of the pull in the larger pistol.

Final Notes
Workmanship is well above average, tolerances are tight, lines and flats are straight, parts are well fitted, there was no hammer bite, and this particular CZ-75-derived grip configuration fits my hand better than any other pistol available. With a cut-out behind the oversized triggerguard for a high hold on the pistols, an enhanced capability for use with gloves in colder climates provided by the dished area in the bottom of the frame just in front of the trigger, a near perfect thumb rest on top of either grip panel, good trigger reach, easily accessible thumb safety, multiple DA/SA hammer position carry options, no unwanted accessory rails, and those grip contours, the AR24s in either size should comfortably fit a variety of hands and a wide range of uses, concealed or otherwise. Should you prefer the heft that only steel can provide, these pistols have a lot to offer. Check them out at armalite.com or call 800-336-0184. 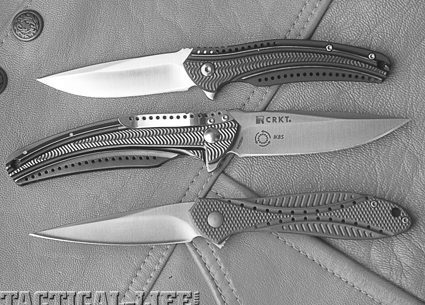 Move over 440C and 154CM. There’s a new Japanese stainless knife being used in...