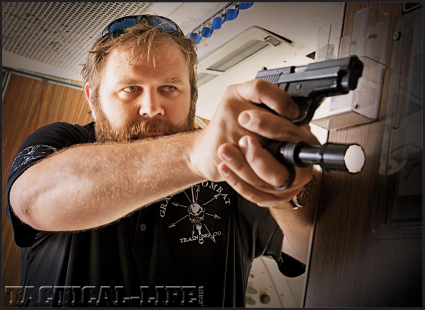 When you are forced to use your handgun in self defense, the scenario will most likely include, in my opinion, one or more of the following: You are taken by surprise, the threat is at close range—arm’s length, and this will take place in what are otherwise non-threatening locations, occurring at dusk or in the evening hours. These factors of being surprised by an arm’s length threat in low light or darkness work against your ability to deliver effective hits, especially if you have not practiced shooting under such conditions. 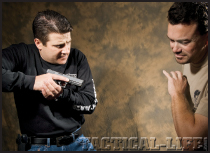 For the sake of brevity here, but to address this matter of being taken by surprise, the skill needed to handle such an attack requires life-long practice and, at best, we’ll never achieve perfection. In fact, what with the proliferation of modern communication and entertainment devices, which it seems everyone is holding, using or listening to every waking hour, the entire concept of “awareness” is becoming an artifact of another age. Awareness is a life-long endeavor and as a mind set can only be self-taught. You either want to learn it or not, and no amount of preaching will motivate you. (Although being blind-sided by an attack is a great teacher…but the class tuition can be prohibitive!)

Considering all this, what we can do when surprised becomes even more critical to our surviving the attack. Now, before going any further, the one best course of action, regardless of the circumstances, is to leave, retreat, run from the problem if at all possible. If retreat is not possible, what we then do to protect ourselves is most critical and does require practice.

Up-close, arm’s-length handgun use is not a natural ability. Nor is it a given that we will be able to get our gun out, fire and hit the target, even at close range.

While this assertion might, on its face, appear to be counterintuitive—if the threat is this close, how can anyone miss—consider that when you react and draw with your concealed handgun, you have zero time to assume a proper grip, release any retaining feature of your holster and be able to get yourself and your handgun into a good shooting stance. Reality is you’ll “grab and go,” so to speak, and hope for the best.

Well, hope is not a plan, but practicing up-close shooting has to be part of a plan. Shooting in dim light or darkness is another part of a plan, as these add a higher level of difficulty in making a good hit…again, unless you practice and know what to practice. Being unable to see well means your dependancy on the traditional use of sights now has you disadvantaged (not to mention not being able to determine if the threat is singular or plural).

A hasty grab for your gun could well result in grabbing it with a poor shooting grip, along with the possibility of having the gun now tangled in your clothing. It is also reasonable to think that if we believe we are in danger of losing our life or sustaining serious bodily harm, we will be triggering shots off as quickly as we think we have our gun directed at the threat.

At arm’s length, sighting in the classical sense of bringing the gun to eye level and aligning the sights just isn’t possible, but we still should be able to correctly align our handgun such that we are not firing wildly, since we are morally and legally responsible for every bullet so fired.

The late Jim Cirillo, famed lawman and winner of multiple gunfights, authored a book in 1996 titled, Guns, Bullets and Gunfights (paladin-press.com), in which he related how he solved the problems of adverse shooting conditions in real-life law enforcement encounters. Jim used and taught what he termed the “weapon silhouette point.” His method is that you, the defender, should be able to “recognize what the rear silhouette outline of the gun looks like when it is correctly aimed at where you want the bullet to go.”

Jim also pointed out, “If there is distance, cover or concealment between a shooter and an attacking opponent, the defender should by all means take advantage of using his sights if they are visible.” But he also flatly stated the obvious, which is, “…the faster you can hit your opponent, the more you reduce the chance of being hit…” Also well worth noting is Jim’s advice to center the handgun to the mid-line of the body; preferably at eye level and with head and eyes squared to the threat.

“Preferably” is the operative word here, because at arm’s length doing so will not be possible, but memorizing the gun’s position by sight and feel can be done such that, with either one or both, you’ll know when your gun is properly aligned. No, you won’t be able to shoot perfect bulls-eyes with this method at 20 yards, but you will at two feet.

Well worth noting, too, is that Jim was an early advocate of using lasers for practice. He mentioned using Beamhit America (now Beamhit-Quarton USA, Inc.; beamshot.com), which uses a laser unit inserted in the chamber of the handgun which, when hit by the firing pin, puts a laser “dot” on the target. He correctly pointed out that using the Beamhit unit gave better feedback than did live fire. Later, after this book was published, Jim became a strong supporter of Crimson Trace Lasergrips (crimsontrace.com) and strongly suggested using them for this feedback. He also pointed out how well they worked for shooting when using sights was not possible.

All good advice from someone who both talked the talk…and walked the walk! 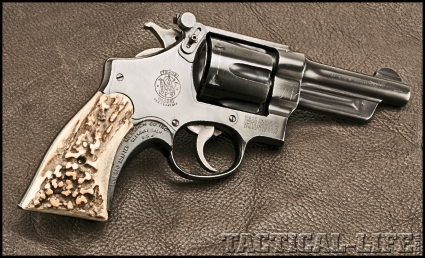 When you are forced to use your handgun in self defense, the scenario will…