Two of the most important aspects of preparing yourself for personal defense are learning to be continually observant, and then to make quick decisions while under time pressure. Oftentimes these points are neglected or overlooked during regular practice, training or practical match competition. Those of us that have been shooting for a long time are quite familiar with the way things usually go. Typically, when the shooter steps to the line and awaits the start signal, he already knows what the problem is.

The experienced shooters will have mapped out in their minds the course of action they want to follow, and know the most efficient way to handle the problem. As a result, the good shooters will often turn in a dazzling performance. They will shoot and move very quickly with good hits on all targets, no hits on bystanders, and with no serious mistakes or procedural errors.

This is fine; it is great sport and recreation and it’s quite satisfying to the individual who has worked hard to perfect a technique. However, it is not a true measure of their survival skills. It completely overlooks the above mentioned points of observation and quick decision making, and this can set up the dangerous illusion that you are well prepared for personal defense. In reality, there just might be several serious gaps in your personal defense armor.

First of all, even though you have mastered the skills of efficient gun handling and good marksmanship, you cannot always know what problem you might face. In any defensive confrontation you must observe the scene, see the problem coming, and quickly decide on an effective course of action. These are skills that most folks have never practiced, or have even thought about their importance. Therefore these issues must be worked on. If you don’t see the threat coming, and if you have never thought about what you might do in such a situation, you won’t be prepared to cope when it unexpectedly smacks you in the face.

Decisive Response
This is where the ID scenario comes into the picture, where the shooter must quickly observe an unknown scene, assess and identify the problem, and make a quick decision on what to do about it. Aside from learning good gun handling and marksmanship skills, it must also be impressed upon the shooter that observation, quick thinking and a decisive response are skills that are just as important. In almost all cases, the shooter’s performance will not be as quick or efficient as when shooting in a known format. Sometimes mistakes will be made.

A bystander might be hit, a target not neutralized, or an armed opponent will not be seen in a timely fashion. After a few exercises such as this each shooter will start to sharpen up, his time will improve, and fewer mistakes will be made. The point is to make the shooter aware of these important skills. It is always best to make your mistakes on the range, and learn from them. This will help to reduce the possibility of errors on the street if you are ever faced with a serious threat.

In our Paladin Program we like to throw in one or two ID scenarios each shooting day. We have the shooter turn his back, and then move targets and props around so the problem won’t be known before turning. Our motto is “whoever said life is fair!” So we like to mix things up pretty well. There will be toy guns, knives, clubs, cameras, umbrellas and even toy badges mixed into the scene. This last one is a real ego deflator. Even though everyone is aware there may be a friendly badge thrown in from time to time, it is surprising how often the friendly cop gets winged!

This happens when the shooter gets a little flustered under time pressure, and shoots a little too quickly before positively identifying the targets. All they saw was the “big black gun,” even though the badge was plainly displayed. When this happens to a shooter before all his friends or classmates, you can rest assured that he will make an effort to scan the targets more carefully the next time before pulling the trigger.

These ID scenarios are great for training and practice, but with a little imagination they can also be used in the match format. Just set the targets up in symmetrical fashion, so that when the props are moved right or left the degree of difficulty will be the same. Use a roll of the dice to determine how the various props are placed. This way each shooter is presented with an equal problem, and no human bias can control how the props are placed. This is not as realistic as moving the targets around, but it will still force the shooter to actually look, identify each hostile target, and make a decision on which targets to shoot, and those that must be avoided.

Another trick that we use from time to time is to drape old shirts over the torso of the targets. This breaks up the nice clean sight picture presented by a plain cardboard silhouette. This also makes the ID props harder to see and identify, especially if the shirt has a plaid or check pattern, or if it is of a dark color. The last time we used the shirts one of them was of a dark green color. When a 2-foot-long toy replica of a Thompson submachine-gun was placed on a target wearing this shirt, it almost disappeared!

Most shooters had a hard time picking it up quickly, even though it was fairly large and close. It was a bright sunny day, but that black Tommy gun just melted into that dark green shirt. Just think how much harder it would be to see a weapon in the hands of a stranger late at night on a dark street!

Dead Time
In an attempt to make folks think in realistic terms, we always start off each shooting day with a “dead time” scenario. The premise is that you have been caught by surprise out in the open, and already are under attack. Your only salvation is a quick and decisive counterstroke. We give you two seconds per target as an outside time limit to save yourself. As an example, two hostile targets equals four seconds, and this is the time within which you must solve the problem. This is a generous time, but if you make a mistake or don’t shoot well and go outside this limit, you will either be given a five-second penalty added to your time, or be declared dead.

I like to do this at the start of the shooting day, because it better reflects your true survival skills. You haven’t had time to “warm up” by shooting for an hour or so. When you shoot that first exercise cold and with no practice, this is a better gauge of your true ability. This also applies to the use of the ID scenario in your training, practice, or match routine. Solving an unknown problem where you must identify the threat and make quick decisions is just as important as being able to shoot well. Some seasoned veterans of the real world might tell you that being alert and aware of your surroundings, and being able to make that quick decision to shoot or not to shoot, is more important than your shooting ability.

Final Notes
The old saying that the best gunfighters are not always the best shooters is a reflection of this fact. Yes, you must know how to handle your weapon and shoot accurately. You don’t have to be a wizard with your handgun, but you must be ready to shoot when necessary. The point is this: If you don’t see the problem coming, and cannot quickly decide on what must be done, it won’t matter how good a shot you are.

Using the ID scenario and the concept of the cold start, in an unknown problem, will help to make the shooter aware of the problems of observing and identifying a threat, and then making a quick decision on what to do next. This will help you to do the right thing when under stress, and minimize mistakes. 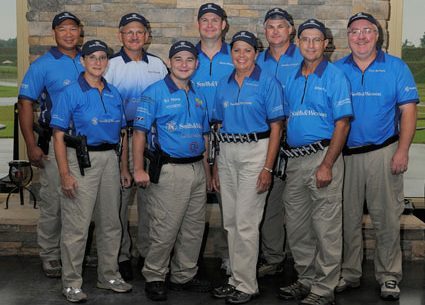