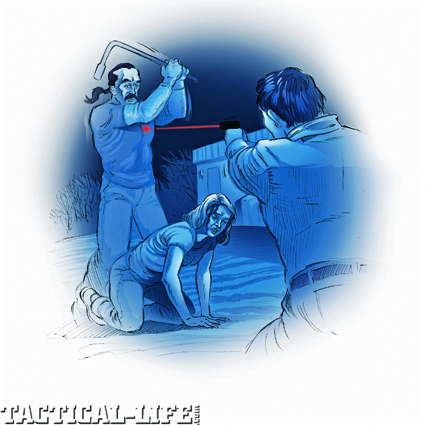 I have had a LaserMax on my Glock 27 for about a year now. I have trained with it at the range, and practiced its activation until it became muscle memory. A week ago, about 2 am, I was returning from the hospital following a friend’s death from cancer. I realized I was almost out of gas, and needed to stop to refuel, despite the hour. As I began to fuel, I heard a lot of screaming, both male and female, from the other side of the station.

I ran to see what was the matter, and as I turned the corner, saw a woman on the ground bleeding from the head, and a man standing above her with a tire-iron. I immediately deployed my Glock, hitting the laser as I cleared the holster, and placed the dot on his chest from about 15 yards. I yelled, “Drop it or you’re dead.” The man looked up at me, saw the blinking light coming from my weapon, then looked down at his chest. He dropped the tire-iron and raised his hands in one motion. I ordered him to his belly, arms out.

The worker at the station had called the police, and poked his head out of the locked door to tell me they were coming. The woman was beginning to stumble to her feet, and I told the attendant to let her into the station with him and lock the door behind them. When the police got there, they saw the flashing coming from my weapon. Instead of the anticipated “drop your gun, get on the ground” they simply said “Good job. Holster your weapon, and we’ll take it from here.”

I think the LaserMax saved this woman’s life as she didn’t get hit a single time after I arrived. It certainly saved the man’s life, as I would have shot him dead had he appeared to begin another blow. And it helped the police see exactly what I was pointing at, and potentially saved my life.
—MS, TX