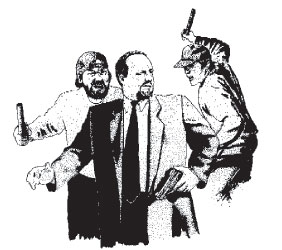 It was over so fast. One smooth squeeze of the trigger and our assailant, who ran at me with murderous intent, was dead. My family was safe for the most part, but things would be difficult for the next few hours at the very least.

One can never be too prepared for the unexpected when it concerns the safety of one’s self or family. Everyone who has been “victim turned victor” can attest to that. That is why we subscribe to magazines like this one and read articles like this. It is another form of preparation.

Long have I trained and drilled for the possibility that a hostile person might try to victimize my family or me. And long have I promised myself that I would not hesitate to react when the threat became “real.” This is nothing new to people who take concealed firearms seriously. But as it happens, I was taken by surprise when the time came to employ said preparations. You can train and train but that may never prepare your family for what happens next. Dad (or mom) goes into protector mode. There is no time for “I love you” or “stay inside sweetie” or “just let me take care of this ‘bad guy’ and then we will go to the park.” No. There is only time to address the threat. This is where it pays off to have involved your spouse and children (depending on their ages) in your training.

Now for some people that means training with the firearms, but for others (whose spouses could not care less about guns and how to use them or why), there is a much easier way to involve them. Simply make a plan. You make a plan for fire drills at home. This is the same idea and mentality. Our basic plan of action is a simple one. All good plans should be simple.

Our plan for the children: Our oldest is very vocal and keenly aware of the fact that I carry a gun on and off duty. I have told her over and over again that she should never say things like “shoot the bad guy daddy” or “arrest them.” She knows (to a degree) what could happen if the “bad guys” know about my guns. So her training is what not to say. I found it very easy to get her into the habit by making a game of it. I randomly ask her to tell me what she will do when a bad person is near; then I have her show me. She gets a treat for doing as we have taught her to do, so she is all too eager to get it right.

Our plan for the spouse: My wife has her own firearm and is willing to use it, but she doesn’t train as vigorously with it as I do. She has her role and it, too, is simple. My wife knows when I tell her to “Get the kids” that her only job is to get the children to the closest place of safety whether it is in the house, car, or outside and to call the police, informing them of these critical details: (1) location, (2) nature of emergency, (3) my description in detail (one of the most important steps because you don’t want the police to arrive and see you with a gun drawn when all they know is you are a stranger with a gun! This little detail has caused the death of many armed citizens doing the right thing, not to mention many, many off-duty policemen being killed by brother officers who did not know who they were), and (4) informing them that I am legally armed and that I am “the good guy.”

She makes the dispatcher repeat the information in order to ensure that they understand that I am a legally armed citizen wearing a “blue and white shirt with jeans” etc. and not to shoot me. Clear communication is critical in such a situation. She will also stay on the line with the police until the officers arrive.

Our situation happened on Memorial Day weekend in our driveway as we were putting our children into their car seats. We were going to a friend’s house for a barbeque. It happened without warning and ended with my wife and children safe in the car. The police dispatcher was on the phone and our attacker was dead from one shot to the heart. My wife and three-year-old saw the whole thing, while our youngest just heard a “big noise mama.”

The police responded to a “shots fired” and were on the scene within moments. I was still unholstered and on target when they arrived. I let them see me put the firearm down at their approach. Did I hesitate? No. Did my wife hesitate? No. Did we put together our combined training to accomplish the uncompromised safety of our loved ones? Yes. Did it go as we had planned and practiced? Almost.

We never practiced for our three-year-old to see and experience death in such a violent and frightening way. How could we? If put in the same situation again, knowing what we know now, would we have done things differently? No. Nothing would have prepared the children for the harsh reality that sometimes you are victimized.
It is our job to teach them that we have the power to change from the victim to the victor and then show them how.

As for our attacker, well, this also was slightly outside of my training drills. Our attacker was a very large and aggressive adult male pit bull that belonged to some people down the street who had left town for the weekend and decided that it was their right to leave their two pits outside to roam the neighborhood for a few days unattended and un-cared for. The shooting was ruled as justified.

It was over so fast. One smooth squeeze of the trigger and our assailant,…