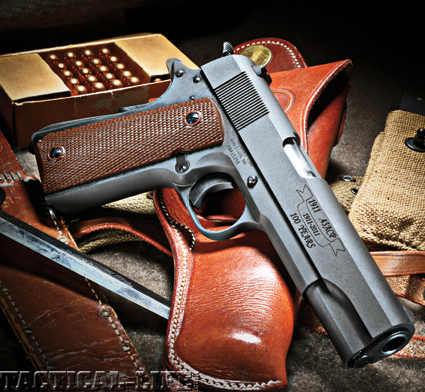 Gun Details
Now, Auto-Ordnance is offering a fitting tribute to the 100 years of service that the 1911 has performed. Called the 1911 Anniversary Model, it is a version of the WWII-style Auto-Ordnance pistol with a deep military parkerized finish, military-style roll marks on the port side of the slide that read “Model 1911A1 US ARMY” and a laser-engraved legend that reads, “1911 .45 ACP 1911-2011, 100 Years” on the right side of the slide.

“Rather than build a commemorative pistol that costs thousands of dollars we decided to take our standard WWII-style 1911 and add some laser engraving,” said Frank Harris, Auto-Ordnance’s Vice President of Sales and Marketing.

One thing worth mentioning is that the current line of Auto-Ordnance pistols is very different than the ones produced in the 1980’s and 90’s. Let me clarify. Auto-Ordnance introduced their version of the 1911 in 1985 and while they were economical they were never acclaimed for their quality. Most of them had rough finishes and the fit of the parts could most charitably be called functional. Auto-Ordnance used slides made from castings for reasons of economy rather than durability. Different pieces were produced by a myriad of suppliers and the parts did not appear to be assembled with any degree of craftsmanship. To be blunt these pistols did not inspire pride of ownership.

Don’t Be A Victim