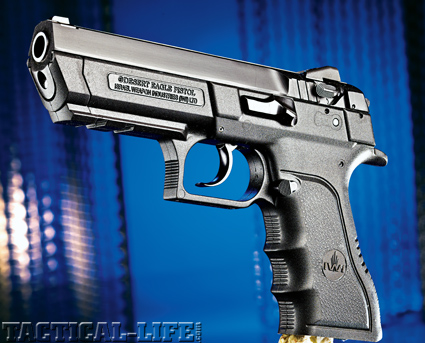 The Baby Desert Eagle II .40 S&W with the polymer frame has finger grooves on the frontstrap, whereas the steel-framed version does not.

About a year ago Kahr Arms purchased Magnum Research Industries (MRI), a company best known for its .50 AE Desert Eagle hand cannon. According to Frank Harris, Kahr Arms vice president of sales and marketing, MRI fit their niche marketing template. “While their numbers aren’t huge, they have an iconic product in the Desert Eagle and little competition. It just made sense to us.”

Gun Details
MRI sent two samples of their full-size Baby Desert Eagles II pistols—one with a steel frame in 9mm and the other with a polymer frame chambered for .40 S&W. Savvy students of firearms will quickly recognize that the Baby Desert Eagle II pistols are clearly inspired by the very popular CZ-75 pistol. Before the Iron Curtain fell, this Czech-made pistol had a cult-like following since being introduced in 1975, but was near impossible to find in the United States. The unavailability of the pistol and its novel features made the pistol attractive to American enthusiasts. 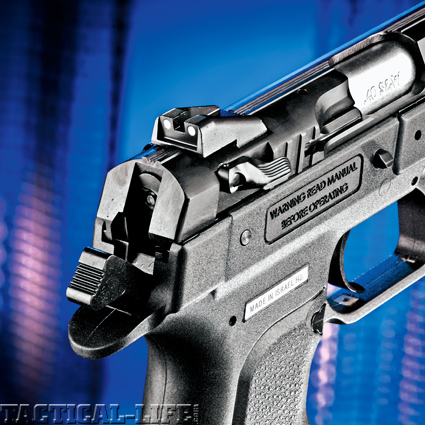 It wasn’t until the early 1990s that Action Arms was able to import a version to satisfy hunger for the handgun. Now, various companies are making pistols inspired by the CZ-75, with Israel, Italy, Switzerland, Turkey and China being the most prolific. IWI changed the frame and slide profiles on its version to look more “Desert Eagle-ish,” hence the name Baby Desert Eagle. It’s interesting to note that with this design (and IWI’s) the slide rides inside the frame rails rather than outside like with the 1911, which contributes to a tight frame-to-slide fit and helps ensure good accuracy.

Lockwork of the MRI import is conventional double-action first shot with each subsequent shot single-action (DA/SA)—at least until the slide-mounted safety/decocker is applied. Doing so decocks the hammer and places the gun on “safe.” Baby Desert Eagle II’s have ambidextrous slide-mounted safety/decockers, compared to the original CZ-75 design that has a frame-mounted safety that allows the gun to be carried with the hammer down for first shot DA or carried with the hammer cocked with the safety applied—“condition one” as 1911 aficionados will tell you. On the IWI version, when pushed to its down position, the mechanism decocks the hammer and disengages the trigger bar so that the gun can not fire. There is no provision with this system to carry the gun cocked and locked. To fire the weapon the shooter simply pushes the safety forward and up with the thumb.

Both guns are full-size models, and with their full-profile frames and slides the guns were easy to control. Even with hot defensive ammo, the 9mm was very controllable. 115-grain FMJ rounds made it feel almost like a .22. The polymer-framed .40 S&W was a little snappier but still very pleasant to shoot. I did all of my accuracy testing at 25 yards, firing my groups from a seated rest using a Millet BenchMaster for support. When MRI reintroduced the new Baby Desert Eagle II guns, they incorporated a Picatinny rail on the dustcover and new low-profile combat sights, and both of these features made shooting the guns for accuracy easy. The flat bottom of the Picatinny rail, used for mounting a light/laser, made the gun rock-solid perched atop my Millett BenchMaster, and the excellent new low-profile sights made getting a clear, precise sight picture easy. Trigger pull of both samples for SA measured right at five pounds. 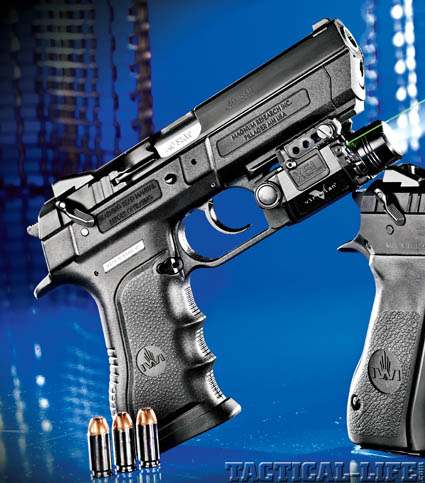 Made in Israel by IWI and imported by Magnum Research, the Baby Desert Eagle II pistols are available with either polymer or steel frames and chamberings ranging from 9mm to .40 S&W to .45 ACP. The .40 shown (above left) features a polymer frame, while the 9mm (above right) has the steel frame.

You might ask which gun would best suit your needs. There is considerable difference in weight between the steel framed and polymer models. In fact, there is nearly a half-pound of difference. The steel-framed gun feels solid with a muzzle heavy balance and the extra weight proved to be recoil dampening. Though the polymer gun does not have the same muzzle heavy balance, it does feel good in the hand. Even with the hotter .40 S&W cartridge, it proved to be very controllable.

Ergonomics of the guns is excellent and both use the graceful arch of the backstrap to push the hand into a high hold grip. For that same reason the triggerguard is undercut at the juncture where it meets the frame. An extended tang protects the web of the shooting hand in the same manner that a beavertail would.

Disassembly of both pistols is easily accomplished without any special tools. With the pistol unloaded and the magazine removed and the safety in its “fire” position, cock the hammer. Push the slide back slightly until the witness mark on the frame aligns with the one on the slide. Now push out the slide stop by pushing on the pin from the right side of the frame. With the slide stop removed, pull the slide and barrel from the front of the frame. Turn the slide over and remove the guide rod and recoil spring from its position under the barrel. Now the barrel can be removed from the slide. Reassembly is in reverse order. 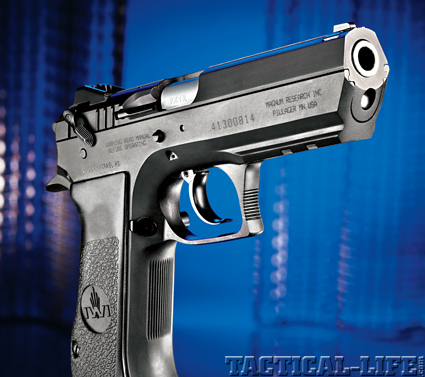 The 9mm version of the Baby Desert Eagle II tested featured a steel frame, which weighed 8.4 ounces more than the .40 S&W version.

Baby Desert Eagle II’s dramatic muzzle styling and full profile prevent it from fitting in most holsters designed for the CZ-75. I contacted Galco to see what they might have available and found that they have a Yaqui Slide that fits most large service-size autos. This holster allowed me to carry both the steel and polymer framed pistols securely. I prefer a nearly vertical positioning for fast presentations, and the Yaqui slide holds the gun straight up and down without any cant. There are two tension adjustment screws that let the user customize the retention. I took turns carrying each gun and discovered that the Galco Yaqui slide was comfortable, fast and retained the pistols. In short, it did everything that I need a holster for concealed carry to do.

Throughout my evaluation I did not have any sort of stoppage with either weapon. Both proved to be reasonably accurate, well finished and ergonomically friendly. If you have a taste for a CZ-75 pattern gun, you’d be doing yourself a disservice to not check out the new Baby Desert Eagle II pistols imported by Magnum Research Industries—I think that you’ll find these pistols to be dependable and reasonably priced. 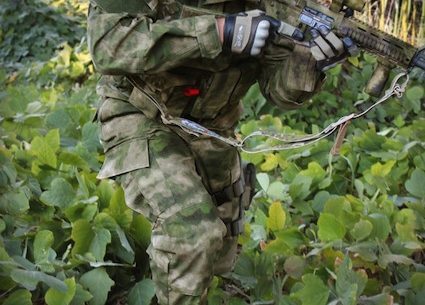 The Baby Desert Eagle II .40 S&W with the polymer frame has finger grooves…