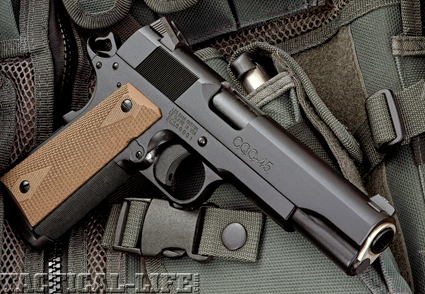 The Baer/Emerson CQC-45 is a full sized “Government” model 1911 with all of the custom touches needed to update the 100-year-old design of the M1911.

In this time of instant communications, unmanned battlefield drones, and smart bombs, the concept of using a 100-year-old design for your defensive sidearm may seem out of place. However, here we are in 2011 and the M1911-A1 is still the weapon of choice for the majority of those needing a defensive handgun. With the 100th birthday of the M1911, there will be article after article about the great design of this old warhorse. However, few will bring out the true nature of the design that has allowed this pistol to last so long in an ever-changing marketplace.
The original handgun was sound for the early 20th century, but the improvements to its basic design over the years have allowed the M1911 to endure. The first modifications came about in 1924 with minor upgrades, and the handgun was then designated as the M1911-A1. From that point on, the improvements have come about as the results of a small group of custom gunsmiths. Unlike some other competitive designs, the M1911 can be modified, and in most cases, improved without changing the function of the pistol. 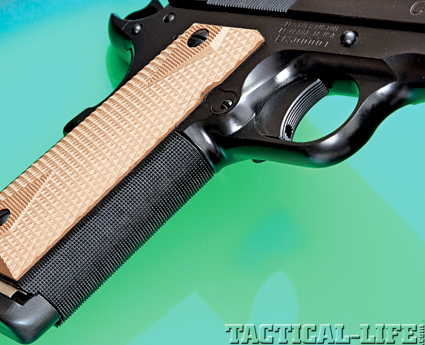 Attention to detail is shown in the fine line checkering on the frontstrap. A small alteration to the area behind the triggerguard allows the handgun to sit a little lower in your hand.

For the last quarter-century, Les Baer Custom has been in the forefront of this small group of people that have tweaked, modified, and improved the M1911. The handgun we use today may resemble the original, but reliability, accuracy and ergonomics have all been improved. Les Baer has taken this artwork to an even higher standard and now offers the 1911 pistols in several combinations to match your needs. Baer has based his business on supplying defensive firearms, and his crew now produces AR-based rifles along with long-range bolt guns to complement his various models of the M1911 handguns.

Gun Details
The company’s latest version of the handgun is a collaboration of work by Les Baer Custom and Ernest Emerson of Emerson Knives. As a team, they produced the Baer/Emerson CQC-45 Combat Pistol & Knife package. Ernest “Ernie” Emerson is a leader in the field of combat fighting knives but he has also been a disciple, student and teacher in pistol craft. He knows what works and what doesn’t with the modifications made to the basic M1911. In the field of self-defense, blades or pistols, Ernie is noted for his no-nonsense approach to combat weapons. He has always been an advocate of the M1911 and was looking for a clean combat-ready, off-the-shelf, 1911 pistol that would be ready to take into action right out of the box. 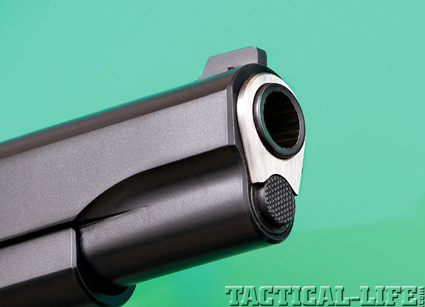 The fitting of the barrel to the bushing is just one detail needed to improve the accuracy.