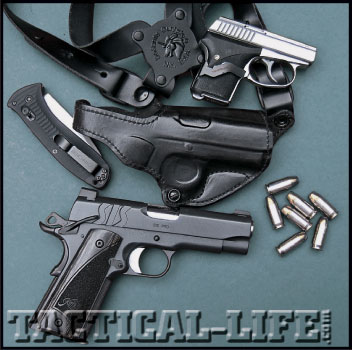 One must hope for without expecting peaceful interaction with one’s fellow man on a day-to-day basis. That said, the daily regimen one practices can make the difference between getting through the day or not making it to the next day. A major caliber handgun, a good carry system, a reliable hideout gun and a stout knife are the most basic of the needed elements. 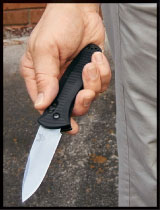 Someone once said that just because you are paranoid it doesn’t mean no one’s following you. I may be paranoid, but the only times I am without a firearm or serious knife are when it is legally impermissible. As I sit here at my computer keyboard, my trusty Seecamp is on body and a larger caliber handgun is on the desk. Of course, there’s a knife in my pocket. As I see it, this is only common sense.

Concealed Rig: DeSantis NYC Classic
There are various ways to go about armed and ready. One excellent approach, if wearing a jacket works for you or, as a police officer perhaps to go openly armed, is the balanced shoulder rig, large caliber pistol holstered on one side, spare ammunition pouched on the other.

Gene DeSantis is an old friend and a nice guy. He also carries a gun. I like holster makers who carry a gun because, when they come up with a design, their real-world experience can make a great deal of difference. Such is the case with a number of the DeSantis holsters and one balanced shoulder holster in particular which I have come to hold in quite high regard. It’s the “New York City Classic.” It is made just right for comfort and concealment.

The large caliber handgun one can wear in such a holster can come from a variety of makers in a wide range of calibers and action types. I use this New York City Classic rig with a full-length .45 auto. I’ve wanted to examine the Kimber SIS Models, so I contacted my old friend there to borrow one and he graciously accommodated me.

There are several makes of diagonal/horizontal shoulder holster that I truly like and frequently use. The reasons why the New York City Classic is one of these include the following points: angle of the gunbutt in relation to the rib cage, reliability, concealability, all-day comfort and access to spare magazines.

The angle of the gun’s butt to the rib cage is something that I find quite important. Although some other extremely effective shoulder rigs may not include this feature, the attachments for the DeSantis rig’s holster in combination with the harness are offset, that is positioned on the body side of the holster rather than smack in the middle of the holster’s top end.

The result is that when the holster is worn with a gun in place, the butt of the gun tilts inward toward the rib cage. This does wonders to help prevent the gun from profiling under a covering garment. The harness to which the holster attaches is a little wide for my tastes, so I got my saddle maker/cowboy holster maker friend Rod Kibler to trim the two front straps a little. In truth, a great many wearers would prefer the wider straps. I’m funny that way.

The offside magazine pouch for the DeSantis rig is unique since it can be worn more than one way, either with the magazines inverted for a bottom opening with the magazines carried diagonally for forward withdrawal or fully rotated 180 degrees.

Let’s discuss the difference between horizontal carry and diagonal carry for a moment. Many persons refer to such holsters as the New York City Classic and holsters like it from other makers as “horizontal shoulder holsters.” Why would anyone want to carry a handgun that way? Anything longer than a snubbie .38 or a Walther PPK would certainly protrude past the body plane and profile so much so that even the most gun-ignorant person would notice it.

Such holsters were never meant to be carried horizontally, but diagonally instead. When carried diagonally, the rear-most portion of the semi-automatic’s slide or revolver’s frame top strap is appreciably lower than the muzzle of the gun. The longer the gun, the more pronounced the angle will need to be. If you don’t carry this way because you don’t trust the snap, get a less concealable shoulder rig or buy a belt holster.

Major Caliber: Kimber SIS
My borrowed Kimber arrived and I happily discovered that despite its 4-inch barrel, it was a perfect fit in the DeSantis New York City Classic.

The Kimber SIS has an interesting background. One of Kimber’s full-size 1911 pistols was chosen by LAPD SWAT in 2002. Happy with the performance of their Kimbers, SWAT recommended them to detectives of the Special Investigations Section—or SIS. Then they contacted Kimber about creating a pistol that would meet their specialized needs. Working in plainclothes, these detective personnel closely monitor criminals in order to be there when a crime goes down and make the arrest. This is dangerous in the extreme. Hence, they began acquiring the SIS pistol in 2006.

The SIS Pro is neither a full-size pistol nor an ultra-compact. Its 4-inch barrel is a quarter-inch shorter than those found on Commander-sized pistols, a full inch shorter than Government/1911 length and a full inch longer than found on Kimber’s SIS Ultra. I felt the 4-inch barrel was a good compromise. Grip length is identical to that of a standard 1911. Despite that, magazine capacity is eight rounds and the magazine seats flush to the grip frame. Bumper pads can be mounted to these magazines if desired.

Slide and frame are machined from stainless steel, the trigger is aluminum and the grips are “laminated,” which are rather attractive and with a good feel. The front strap is checkered. The stainless steel is a non-reflective dark gray. A handsome and well-fitted pistol, it shot well in my hands and in my son-in-law’s hands as well. Danny Akers is a better marksman than I, so his shots were tighter. I use Federal 230-grain Hydra-Shok in .45s I carry, and that was the ammo we used in the initial shooting with the Kimber SIS Pro.

Now, if you have seen any of the Die Hard movies and have a sharp eye, you will have noticed that Bruce Willis’s character always carries a DeSantis shoulder rig. “Detective John McClane” is supposed to be a New York cop, so one would not be surprised that he favored a shoulder rig named after his hometown. DeSantis is headquartered in Amityville, New York, which is close to the Big Apple itself.

Movies are great, and it’s always good to see equipment that makes it in the aforementioned real world in use on the big screen. Most movie gun carriers for some reason only carry that one weapon and somehow manage an unending supply of loaded spare magazines, which when emptied, they toss away. The New York City Classic only carries two spare magazines for the Kimber SIS Pro and with what magazines cost, there’ll be no throwing them away.

CovertCarrier-Seecamp Duo
Looking to the reliable hideout gun and knife to complete the potent undercover carry package, I chose a novel carry for a quite familiar handgun. The CovertCarrier features a stainless steel hook-like piece, which is available as an aftermarket add-on for certain guns, as part of a grip sleeve for other guns or as part of a replacement grip panel for still other guns, among these the Beretta Tomcat 3032 and the Seecamp .32 or .380.

When worn with the Seecamp, the black-coated stainless steel and the black grip will essentially vanish from sight when tucked into the waistband of dark trousers, a dark belt over the hook-like appendage. Almost nothing of the gun rises above the belt line. This is a fine way to carry a smallish back-up automatic. Whereas with a pocket holster of any type, reaching for the pistol successfully when seated is quite a challenge; when using the CovertCarrier, the gun can be positioned anywhere on the waist and brought into service from any body position. This versatility is particularly useful with a back-up gun, especially when the primary ordnance is in a balanced shoulder holster.

Whether it’s the primary gun or the spare ammunition on the other side of the rig, guns worn in belt holsters or inside waistband holsters in any conventional position—strongside between the hip and the kidney, etc.—will regularly collide with the butt of the primary ordnance or the offside unit. It cannot be avoided. Pocket holsters prevent this, of course, but are not readily accessible at all times, as stated above. The CovertCarrier takes care of the reliable hideout gun portion of the potent undercover carry package.

Benchmade Pardue Auto Presidio
What about the knife? If you live where automatic knives are legally permitted for carry, one would be hard pressed to find a better one than the Benchmade Pardue Auto Presidio 5000. Just under 5 inches when closed, blade length is 3.5 inches. Fitted with a switchable butt-mounted pocket clip for right- or left-hand carry, the knife is truly ambidextrous. There’s a lockout on the spine of the haft, which prevents accidental activation of the ambidextrous opening/closing release mechanism. The actual release mechanism is mounted well forward and can be activated from either side of the gripping surface. The steel is 154 CM. Several versions of the Presidio are available.

Final Notes
Hoping for peaceful interaction with one’s fellow man, but not always expecting it makes sense. The large caliber handgun in the reliable and comfortable shoulder rig, the hideout gun and the knife all contribute to having a thick skin when interacting with one’s fellow man because you know that you can handle most situations if you can’t just walk away but really must act. That’s what peaceful interaction is all about! 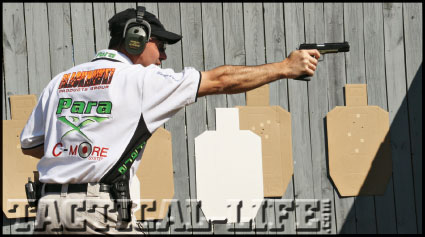