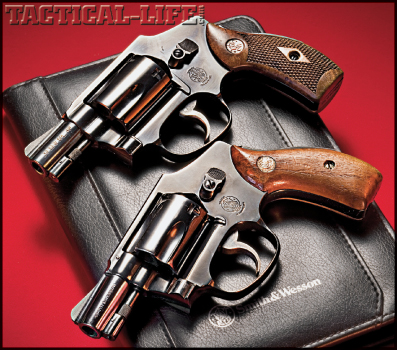 We have become accustomed to battles between the various handgun manufacturers. Glock competes with Smith & Wesson—and everyone else. Heckler & Koch takes on Sig Sauer—and everyone else. Ruger competes with Taurus—and everyone else. That’s not all of it since there are many makers and they’re all hard at work designing and building the best possible combat handgun. This is particularly true in the field of concealment pistols and revolvers. Today, they are making them smaller, flatter, more powerful and user friendly, but above all, they are making them lighter. Yesterday, it was different. 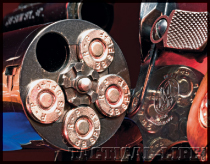 Sixty years ago, the American handgun industry was recovering from the frantic production efforts of World War II. There were few models made, but there were several sizes of revolvers built by the two giants of the industry: Colt Manufacturing and S&W. In those days, more and more handgunners wanted easy to carry small guns and that criteria equated to light guns. In 1949, there were no light guns because the use of aluminum alloys was yet to be tried. Then Colt changed everything with the development of an aluminum material called “Coltalloy” and the world of guns was never the same afterwards.

Colt’s first lightweight gun was the legendary Commander, a shortened and much lighter version of the 1911 Government model in .45 ACP. It was well accepted by American shooters and Colt followed quickly with the Cobra revolver. This was a version of the pre-war Detective Special, essentially a Police Positive Special in .38 Special, but made with an aluminum frame and crane. It was an instant success. A few years later, Colt followed with a short butt version of the Cobra revolver, calling it the Agent.

Meanwhile, farther up/down the Connecticut River, the designers at S&W were also hard at work. In the late 1940s, they had a small or lightweight hideout revolver. But when they took their diminutive I-frame .38 S&W and stretched the cylinder and frame to take .38 Specials, they called the result a J-frame.

The first gun on this frame was the legendary Chiefs Special and it was an instant success. Almost as soon as they came out with the first steel version, they also produced a controversial aluminum frame gun that drew immediate interest from S&W fans. Some of the first of those guns, 3,777 to be exact, were produced with aluminum cylinders to match their light frames and yokes.

In the long run, these proved to be unsuitable for .38 Special stresses and were discontinued. A little later, the Chiefs Special Airweight became known as the Model 37. It was a very popular revolver. It has been made in many variations over the years. This includes both round- and square-butt guns with 2- and 3-inch barrels.

The Colt Agent was a great little gun with a short butt that made it a little more concealable than the Cobra. Built on the company’s D-frame that dates to the early years of the 20th century, the Agent packed away easily in pockets, various kinds of holsters and even ankle rigs. It works on the basis of a V-spring action of the same type used on all of Colt’s early DA/SA guns. Grips were checkered walnut with medallions, and the action turned the cylinder in a clockwise direction. Sights were plain black fixed type. Colt offered a hammer shroud that mounted to the gun with a couple of screws. This device required gunsmithing, but was actually pretty popular in the days when Colt was offering them.

S&W’s entry in the great 1950s baby revolver wars was the familiar Chiefs Special, or Model 37, in lightweight trim. All Chiefs Specials have a modern coil-spring action. Grips were also checkered walnut and the gun had an action that turned the cylinder in a counterclockwise direction. Instead of using a removable hammer shroud, S&W solved the internal hammer design problem with the Bodyguard revolver, which shrouded most of the hammer spur, but left enough of the tip exposed for cocking.

Both guns had fans and it always seemed to be one or the other with no equivocation. The two guns competed vigorously with almost zero competition from any other company in the small revolver market. Colt guys liked their distinctive trigger action; so did the S&W fans. Personally, I always like the Smiths by a little margin, but I did use a Colt from time to time. Objectively, the S&W lightweight was about 1.5 ounces lighter. It was also slightly smaller than the Colt. It was much harder to find a gunsmith who could repair a Colt, which had an action that tended to go out of time, but when Colt actions were tuned by one of the real experts, the action was to die for.

Little hideouts tend to take a beating and the Smiths probably held up better, partially because of the support for the ejector rod. Eventually the S&W edged out the Colt, but it was really more of economic superiority of the one company over the other than the inherent value of one gun over the other. The Smiths are still made, but all Colt DA/SA revolvers are gone. They were both fine, high quality Yankee firearms.

But there is one major advantage of one design and no one could ever deny the effectiveness of this one. The Colt Agent was a six-shooter and the S&W Airweight Chiefs was a five-shooter. And back then, the old boys at Colt cheerfully beat the daylights out of S&W in their advertising, raving about the virtues of “the all-important sixth shot.”

We have become accustomed to battles between the various handgun manufacturers. Glock competes with…