I work for an armored truck company in NY. For obvious reasons we go through extensive training before we are put out on the road. During training, there was a phrase given us seemed to stick in my head at the time and proved to be the most valuable thing I would carry with me throughout my career. The phrase was, (and has certainly applied to my civilian life as well), “Don’t ever confuse being familiar with being safe.”

This leads me to the situation where it may have saved my life. I was on a run that I had been on a hundred times. Going in the stops that again I had been in a number of times. It was early in the morning and I was entering a convenience store that was all too familiar as I had delivered and picked up money there on a weekly basis for some time. There were a few people standing in line at the register and, of course, there had to be one idiot that said the words I hear at least 20 times a day, “Hey buddy, got any samples?” As always, I replied with, “Sorry man, I was giving them out at Christmas, you missed it.” Now what he must have heard was, “Look for yourself,” because that was exactly what he attempted to do. The guy reached to grab the bag we use for transporting money and I was one step ahead of him. I pulled the bag behind my body, palmed the bone on his left forearm and broke the release on my holster administering a firm grip on my sidearm. Textbook style, my hand was there before I realized my grip.

The drivers of our trucks always park right in front of the stops doors so that he can clearly see every move we make and my driver didn’t miss this. Over my two way radio, the driver was asking if l needed assistance, the cashier on the other side of the counter was asking if I wanted the police called, and the idiot I palmed was holding his arm whining something to the effect that he couldn’t believe I hit him. I responded to my driver first, telling him everything was under control. The cashier asked again if I wanted the police called and I told her it wouldn’t be necessary. She told the idiot, as you can tell I like to refer to him, to leave the store and that he was no longer welcome there. The incident took just a matter of seconds from beginning to end, and seemed like it took an hour. No one was badly injured and no shots fired.

Like I said, I had been to this stop a number of times and it was in fact very familiar to me. Nevertheless, I didn’t let my guard down just because I knew the stop and nothing had ever happened there before. I have learned over time to watch people’s hands and that’s the first thing I see on a person and absolutely where the majority of my concentration lies. It seems people get all too familiar and comfortable with a place, and forget that danger and crime revolve strictly around opportunity, not only location.
—RH, NY 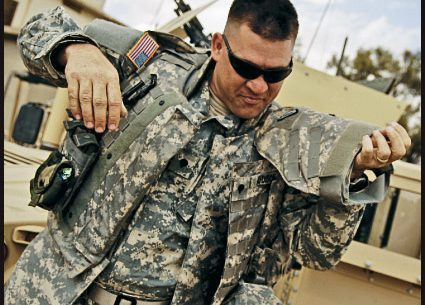 I work for an armored truck company in NY. For obvious reasons we go…