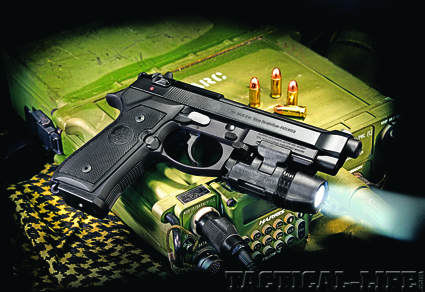 With 25 years of combat-proven service under its belt, the M9A1 takes the classic Beretta pistol and enhances it with an integral accessory rail and a host of other upgrades. The pistol shown is equipped with a BlackHawk Night-Ops Xiphos NT light.

It was 25 years ago this year that Beretta won what may be considered the most coveted handgun purchasing contract in the world. In 1985, the United States military selected the Beretta 92 as its new official sidearm, renaming it the M9 and replacing the venerable .45 caliber Model 1911, which had been in continuous service for more than 70 years. There will always be disagreement on the switch from .45 ACP to 9mm, but there is little dispute that Beretta earned this contract.

Beretta is one of the most renowned names in the firearms industry, and for good reason. It is in fact the world’s oldest continuously operating manufacturing enterprise, dating to the Renaissance. The company’s earliest document is an order to Bartolomeo Beretta, born before Columbus discovered America, dated 1526 for his forge to produce 185 harquebus barrels. Despite the company’s tremendous growth over the years, it remains a family enterprise with a Beretta at its head.

Beretta doesn’t make too many harquebus barrels anymore, but its modern firearms are a continued testament to the company’s innovative approach to design and its commitment to quality, a side effect I suppose of putting your own name on every gun you make. However, Beretta’s most famous firearm may well be its Model 92 pistol, first offered in 1975 in 9mm and now available in a host of calibers and configurations. Several different designs and features have followed, and even today Beretta continues to make improvements to meet the changing needs of military, law enforcement, and civilian shooters.

The switch to the M9 pistol was far from instant, however. In fact, my own National Guard unit was still issuing me a 1911 as late as 1991. I will always have a 1911 in my collection, but I cannot deny that the Beretta 92, with its Italian sports car looks, its open slide (topless) design, and sleek lines, was the first handgun I ever owned. It never let me down and was reliable to a fault. It surprised me not at all that this was the final choice to replace the 1911. 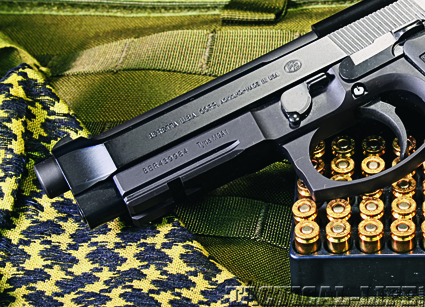 The M9 is a short-recoil, semi-automatic pistol with a standard 15-round capacity magazine firing in double-action for the first shot with the trigger pull both cocking and releasing the hammer, and single-action for all subsequent shots. The open top design isn’t just for looks either, although it does help reduce the pistol’s weight, as does the aircraft quality 7075-T6 aluminum alloy frame. This slide design provides for easier, trouble-free feeding of rounds from the magazine to the chamber, reduces the likelihood of jams and malfunctions, and makes them easier to clear when they do occur. The M9’s disassembly latch is also a nice feature that makes it an extremely easy gun to disassemble for maintenance. 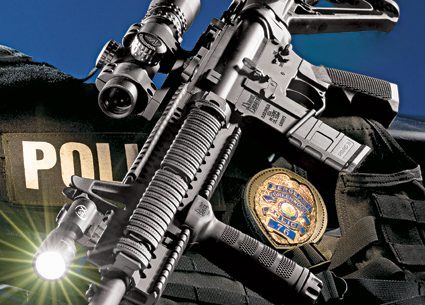 With 25 years of combat-proven service under its belt, the M9A1 takes the classic…