It had been almost a full year since I first heard of the Bersa BP9 Concealed Carry (CC), and I had been trying to get my hands on one ever since. As Bersa pistols are made in Argentina, they have to pass a battery of BATF regulations before they can be legally imported, but the gun finally arrived from Eagle Imports, the New Jersey-based company that brings Bersa’s firearms to these shores. This is not my first experience with their handguns—I’ve tested Thunder series pistols in .380 and .45 ACP, plus a Firestorm model in 9mm—so I already know that Bersa makes a quality product at an affordable price. When I heard that they were moving into the realm of polymer-framed, locked breech, striker-fired pistols, I was even more intrigued.

The BP9 CC test pistol arrived with a magazine inserted, along with an extra magazine. With the exception of a small metal plate imbedded in the frame with the serial number, the entire surface of the BP9 CC is matte black (a duotone version is available). The first thing I noted when I removed the pistol from the case was the slender grip frame. In fact the entire gun is slim with an overall width of only 0.94 inches, making it very easy to conceal—especially in an IWB holster. The grip frame/grip surfaces are integral with the polymer receiver and the sides of the grips have molded-in knurling, coupled with serrations on the front- and backstraps, to aid in obtaining a secure grip during firing. As you may have guessed by now this gun has a single-column magazine and total capacity is 8+1 rounds of 9mm ammunition. Said magazines are blue steel with a plastic follower and thick polymer baseplate. 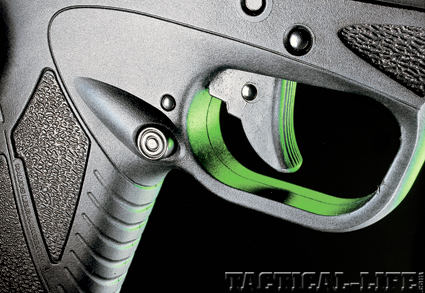 The BP9’s trigger is DAO, while the ambi button-style mag release is located where the lower part of the triggerguard intersects with the grip frame.

The magazine release catch is a button-type and is ambidextrous, located just where we Americans like it—where the lower part of the triggerguard intersects with the grip frame. Where the triggerguard intersects with the frame’s dustcover there is a triangular shaped knurled section on both sides of the frame that is perfect for placing the tip of the index finger while holding the pistol. Just forward of this is a Picatinny rail for the mounting of tactical lights or laser sights. 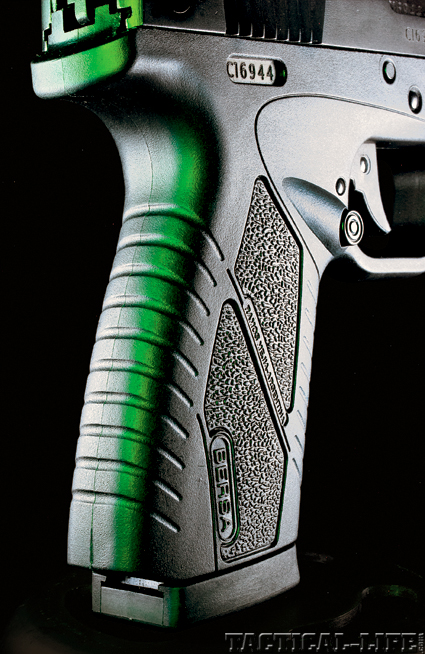 The grip surfaces are integral with the polymer frame, while the sides of the grips have molded-in knurling, coupled with serrations.