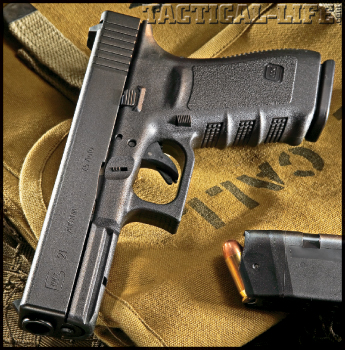 Though it’s a relative newcomer to the tactical pistol world, Glock’s 21 SF (Short Frame) has already begun to make its mark. Indeed, those like myself who found the standard Glock 21 too wide to grip comfortably praise 21 SF’s coming. Now, at last, there’s a Glock .45 ACP that’s truly useable by all.

Yet, regardless of how well conceived or consummated a given weapon might be, it can always be made better. In this case, since it already possesses nearly all of the characteristics superior weapons exhibit, only thoughtful ammunition selection remains. Yep, though the G21 SF is an impressive pistol, it can without be made to perform even better by choosing the best ammo for it.

To this end, I tested a wide cross-section of factory ammunition, using the following criteria: 25-meter accuracy, functional reliability, whether or not it shot to point-of-aim (POA), JHP bullet expansion and weapon controllability.

Before I go any further, let me state that while some loads performed better than others in the various categories mentioned, all of them were more accurate than all but the most skilled marksman can utilize. And even then, I doubt seriously that under the extreme operator skill debilitation experienced in a deadly encounter by even “the best of the best” shooter the differences in intrinsic accuracy would even be noticed.

I can also state conclusively that all of them fed and functioned flawlessly. Not a single malfunction was experienced with any load tested.

Hardball
To begin, the 230-grain FMJ, or what is often termed in military parlance, “hardball,” is without a doubt the generic .45 ACP load. And in my G21 SF, like it does in nearly all .45 ACP pistols, it performed well. All the brands of 230-grain FMJ I tested, including CorBon, Remington, Federal, Winchester, Hornady and even some military ball, proved to be quite accurate, printing 25-meter three-shot Ransom Rest groups in the 1 to 1.5 inch range. And, not surprisingly, it also shot exactly 1 inch above POA at 25 meters, which puts it dead-on at 50 meters, the usual range for which service pistols are zeroed.

It was also no surprise that it fed without mishap, functioned normally and was totally controllable in fast shooting sequences. After all, the .45 ACP has a great reputation for doing just that in virtually any kind of pistol chambered for it.

Of concern to some, however, is the issue of stopping power and penetration with 230-grain FMJ ammo. Some say that it’s over-penetrative, but my own observations have shown otherwise. In human targets, 230-grain FMJs only rarely exit and when they do are almost invariably found lying on the floor within a short distance beyond the target. This can hardly be considered over-penetrative and is in fact, considerably less penetration than exhibited by the vast majority of other loads and calibers.

While exceptions to the norm occur, claims to the contrary are almost invariably based on the assumption that because a FMJ bullet is involved, it will automatically over-penetrate. Such assumptions are based upon experiences with the 9 mm and .38 SPL FMJ, not the .45 ACP.

As for stopping power, 230-grain FMJs have more than enough to handle nearly any self-defense situation. After all, the .45 ACP’s well-deserved and documented reputation for superior stopping power was made with 230-grain FMJs in the first place. Though I don’t claim it to be all-inclusive, my own experience with hardball includes five instances where it produced one-shot stops with a well placed thoracic hit, something that few other cartridges can duplicate.

This is obviously 100 percent and whether anyone likes it or not, is a far cry from being deficient; quite the opposite. Still, having said this, I once again caution the reader that I’m not saying that my own experiences are necessarily representative of the norm. However, in the current campaigns in both Iraq and Afghanistan, it continues to be well thought of by all who have used it for this same reason.

JHP Loads
As for JHPs, the subsonic velocities produced by the .45 ACP don’t cause much expansion with conventional designs. However, there are exceptions. For example, I found that, in water, at least, the Winchester Personal Protection SXT (Supreme Expansion Technology) 230-grain JHP expanded quite well. I haven’t had occasion to use it on either people or game, so I can’t guarantee that it will do the same in those mediums, but considering the degree of expansion it showed in water, I think that at least significant expansion in live organisms can be expected.

It’s also satisfactorily accurate for all but the most precision oriented of self-defense functions, fed and functioned reliably in my test gun, shot to POA at 25 meters and was quite controllable.

The best performer in my G21 SF was CorBon’s 160-grain DPX (Deep Penetrating Expanding) JHP, which also quite controllable, highly accurate, shot to POA at 25 meters, functioned perfectly, and demonstrated excellent expansion in both water and game animals. Where larger animals were involved, it penetrated sufficiently to reach vital organs every time, but only rarely exited, thus a textbook performance.

CorBon’s 165-grain Pow’RBall also expanded very well, but by design lacks the penetration to be considered a general-purpose load. Conversely, it would perform very well in situations such as home-defense, in which over-penetration can be a serious hazard. It’s also controllable, sufficiently accurate for its intended purpose, functionally reliable and, in the test gun, shoots close enough to POA to be dead-on with a minor rear sight correction.

The Speer Gold Dot and Hornady XTP 185-grain JHPs also shot quite accurately and at 25 meters, printed pretty much to POA. However, though they were quite controllable and functioned normally, failed to show much expansion, even in water.

Conversely, the Speer Gold Dot and Hornady XTP 200-grain +P JHPs were much harder to control, still didn’t exhibit significant expansion and shot six inches high at 25-meters. For my needs, this is way too high to be considered satisfactory, so in conjunction with their lack of expansion and controllability in fast shooting sequences, makes them a less than optimum choice.

Winchester Personal Protection SXT 230gr JHP
As previously mentioned, only the Winchester Personal Protection SXT 230-grain JHP expanded satisfactory. All other brands—Federal’s Classic, Remington’s UMC, Federal’s Premium Hydra-Shok, Speer’s Gold Dot and Winchester’s white box 230-grain JHPs produced 25-meter three-shot Ransom Rest groups in the 3- to 3.5-inch range. However, though they fed and functioned well, shot to POA, and were controllable, none of them exhibited significant expansion, even in water.

Though it produced satisfactory accuracy in the test gun, the remaining 230-grain JHP, Hornady’s XTP +P, also didn’t expand to any noticeable degree, was a bit too punchy in the recoil department for my tastes, and shot excessively high (3 inches at 25 meters; 5 inches high at 50 meters) to satisfy my requirements.

CorBon 160gr DPX JHP
Thus, overall, CorBon’s 160-grain DPX JHP is the most superior of all loads tested. It’s highly accurate, functionally reliable, shoots to POA, expands very well in both water and game animals, and is totally controllable in fast shooting sequences. As such, it satisfies all the aforementioned criteria and is thus clearly the most capable load tested.

My second choice is Winchester’s Personal Protection SXT 230-grain JHP. It, too, expanded well, produced good accuracy (2 to 2.5 inches at 25 meters), functioned reliably, was totally controllable and shot to POA.

Final Notes
Once again, I point out that the performances I’ve discussed were from my Glock 21 SF—another example of the same model might perform quite differently. If nothing else, this possibility should underscore the need for in-depth testing of any self-defense load before final selection is made.

However, in my experience, the two loads listed as being the most capable have also performed well in other .45 ACP handguns, so I think it’s safe to say that at the very least, they’re worthy of serious consideration. Based upon how they performed in the test gun, they’re clearly the best choice for my needs.

Is Taliban Winning War in Afghanistan?

Though it’s a relative newcomer to the tactical pistol world, Glock’s 21 SF (Short…