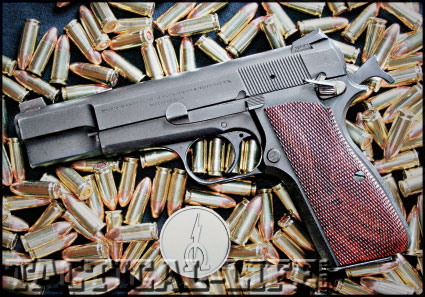 Since it first appeared way back in the 1930s, Browning’s P35 (Hi-Power) 9mm (9×19) has been one of the most popular and enduring self-loaders of all time. Indeed, even though many pronounce the day of the Condition One (cocked & locked) SA auto to be over, in preference to more modern DA and DAO designs, the venerable P35 remains in wide proliferation around the world, still being in use as the service pistol of many nations.

From the outset, the P35 has been recognized as a graceful, aesthetically pleasing pistol with excellent balance, pointability, relative compactness, user-friendliness, and large capacity (13-round) magazine. As such, it has also achieved the status of being known as the Cadillac of 9mm pistols, though some argue that many of the newer designs are superior. From a purely technical standpoint that observation may well be true, but history has shown that the P35 is obviously good enough to survive the most acid of tests—time.

On the other hand, being a relatively old design and thus intended to be used primarily with the FMJ (“ball”) ammunition that was status quo at the time, the P35 often doesn’t feed reliably with some of the more “modern” JHPs. Naturally, only extensive test-firing will disclose whether or not your preferred ammo will feed and function, but if such is indeed the case, a slight relief of the top of the feed ramp area just beneath the chamber entrance, and overall polishing, will almost always alleviate the problem.

This said, like all guns, the P35 does perform better with some loads than others and regardless of how good a pistol it might be, it can without question be made better by choosing the right ammunition for it. Testing with my two P35s; one an original Belgian gun and the other made of parts built in Belgium, but assembled in South America, showed this beyond a doubt, but it should be understood that you might have totally different results with other examples.

Favorite Loads
In my two P35s, there were actually four “best” loads. The first, CorBon’s 90-grain JHP, ended up tops because it literally satisfied all of my criteria: availability, accuracy, controllability, bullet expansion, functional reliability, point-of-aim/point-of-impact compatibility and just the right amount of penetration.

My other three preferred loads, CorBon’s 115-grain DPX JHP, and Winchester’s Ranger SXT (LEO) 127-grain +P+ JHP and 147-grain JHP, were almost as accurate, also shot to point of aim, fed just as well and expanded substantially in both water and medium-sized animals without being over-penetrative. However, in the case of the last two, it should be understood that being LEO (law enforcement officer) loads, the Winchester 127- and 147-grain JHPs aren’t available except from law enforcement dealers and distributors.

Nonetheless, to me at least, all four “preferred loads” represent a high point in 9mm performance and I would carry them for self-defense purposes without reservation. The CorBon 90-grain JHP and both Winchester loads produced 25-meter 3-shot Ransom Rest groups averaging 1.5 inches and the CorBon 115-grain DPX JHP shot a bit under 2.5 inches.

Next came Winchester’s “Personal Protection” 115-grain JHP, Remington’s 115-grain JHP and Federal’s “Classic” 115-grain JHP. They, too, shot to point of aim in the two test guns at 25 meters, fed without mishap, were completely controllable in fast shooting sequences.

However, though they showed significant expansion in water, they didn’t upset to any degree in living animals such as jackrabbits, coyotes and mule deer, which often required from two to as many as five solid hits to put down. Subsequent analysis showed a permanent wound channel virtually identical to 115- or 124-grain FMJ “military ball” with similar results, though they didn’t exhibit as much penetration.

In the expansion department, at least, the 124- and 125-grain loads didn’t perform any better, though they did exhibit minimal upset in water. This having been said, they did function perfectly, demonstrate good accuracy, shoot to point of aim and were controllable in high-speed shooting drills.

In contrast, all four of my preferred loads, the CorBon 90-grain JHP and 115-grain DPX JHP, and Winchester Range SXT 127-grain +P+ JHP, put down medium-sized animals out to a full 75 meters or more with a single well-placed hit. Not surprisingly, the police departments across the country that use them also report excellent results on human adversaries.

Virtually, since it first appeared way back in 1902, the 9mm has been the object of intense controversy about its stopping power or, more precisely, lack of stopping power and excessive penetration. Without a doubt, in its military FMJ “hardball” loading, its poor reputation is legitimate on both counts. And considering the lack of expansion in living organisms shown by many “modern” JHP loads, must be considered in that same light.

Final Notes
However, some (such as my four preferred loads) do expand significantly and don’t exhibit excessive penetration, thus bringing the venerable 9x19mm to its highest level of performance ever. In both of my test guns, at least, they were very accurate, fed well, were completely controllable and exhibited substantial bullet expansion without being excessively penetrative. Moreover, none of them showed more than minimal muzzle flash, a serous issue in low light situations.

As such, I think they can be legitimately considered to be the best. However, as previously mentioned, be sure to test all loads for the criteria mentioned in your own gun to make certain. Remembering that we’re talking about selecting loads upon which you’re quite literally betting your life, the necessity of doing this cannot be overstated. 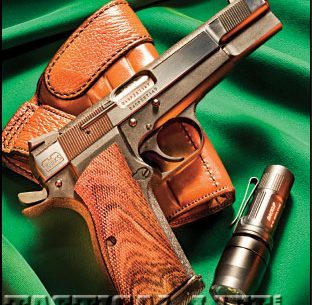