0
SHARES
509
VIEWS
Share on FacebookShare on Twitter
Since its first appearance back in 2006, the Springfield Armory XD45 .45ACP has taken the self-defense shooting world by storm. Featuring the proven design of the preceding XDs, it’s also the first .45ACP self-loader that utilizes a large-capacity, double-column magazine while retaining a standard grip frame, something no other maker of .45ACP pistols has yet been able to achieve. 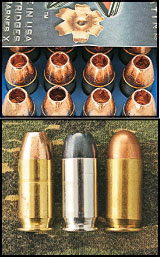 This feature alone is no small feat, for the XD series has quickly become famous for having a wonderful grip configuration and, thus, fine pointability. All of the other .45ACP pistols that feature a large-capacity magazine also have a rather large grip frame, which denigrates the gun’s grip index. Translated to the high-speed world of combat pistol shooting, this makes it slower to present and harder to control when being fired.