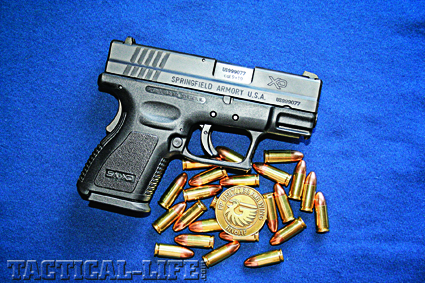 Ever since it first appeared a few years ago, Springfield Armory’s XD series has been taking the shooting world by storm. And though the initial gun, the XD-9, was an instant success, the XD series itself has evolved into multiple calibers and configurations, all of which fulfill a specific tactical need.

There is now a Standard XD, a larger (longer slide and barrel) Tactical XD and a Sub-Compact XD models. The Tactical XD is intended primarily for open carry military and police use, whereas the Standard version is more suited for plainclothes officers and civilians. The Sub-Compact, by virtue of its diminutive size and lightweight, is perfectly configured for concealed carry functions.

Concealed Carry Missions
The Sub-Compact XD is particularly well suited for deep-cover narcotics agents and civilians with CCW (concealed carry weapon) licenses. And, of the various calibers in which the gun is offered, the 9mm version, the XD-9, is the most commonly encountered. Before I proceed further, let me state that the results obtained in my testing were with my XD-9 Compact and though I’m sure the basic trend will be the same with all XD-9 Sub-Compacts, there may be some specific differences. Though guns are mass-produced to certain specifications, there are idiosyncrasies from gun to gun, meaning that a given example may perform differently than the next.

This being the case, you should understand that while testing of the most commonly encountered 9mm factory JHP loads has yielded certain results, testing of that same ammunition in a different gun might yield data that is completely different. If nothing else, this tendency should underscore to you the need to test any ammunition you’re considering for self-defense or other tactical use in your particular gun. Otherwise, you’ll never know for certain whether or not it satisfies your needs.

My needs are relatively simple. First, since I regard the XD-9 Sub-Compact as a specialized, rather than general-purpose tactical weapon, the conditions that I would use it are more limited. For example, as a civilian, I have no need for extra penetration on automobiles or other intermediary obstacles. In fact, though it might benefit a uniformed police officer, such penetration would for my purposes actually be a liability. 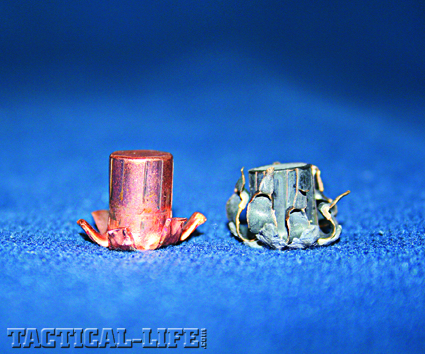 Ammo Perimeters
I need ammunition that will: 1) shoot to or very nearly to point-of-aim at 25 meters; 2) exhibit minimal muzzle flash and recoil; 3) give me the best bullet expansion possible at the reduced muzzle velocities inherent to the XD-9 Sub-Compact’s short barrel; 4) produce the best accuracy possible, in case I must engage small or partially concealed targets.

Criteria number three immediately disqualifies all the 147-grain JHP because from the XD-9 sub-compact’s 3.5-inch barrel, they won’t generate velocities higher than 875 fps (feet per second), hardly sufficient to expect more than marginal bullet expansion at best. Criteria number one also disqualifies the 147-grainers as they tend to shoot excessively high.

Surprising as it may be, the same can be said for the 124- and 125-grain JHPs. While they’re more than accurate enough and usually function well in the XD-9 Sub-Compact, they also don’t produce enough velocity to expect much expansion. Only those loaded to “+P” or “+P+” specifications generate sufficient velocity for reasonable bullet upset to be expected.

Because it’s loaded to these specs, Winchester’s Ranger SXT (LEO) 127-grain JHP expanded rather well, at least in water. However, I’ve used this particular load on small and even medium game and found that it expands rather well, even at 1050 to 1100 fps (feet per second), which is typical from a 3.5-inch barrel.

Hollow Points
This leaves only JHPs of the 90- to 115-grain variety. CorBon’s 90-grain JHP, for example, expands exceptionally well, demonstrates excellent accuracy (1.5-inch three-shot Ransom Rest groups at 25 meters; 1-inch groups at 15), feeds and functions well and shoots to point-of-aim in the test gun, and is neither difficult to control in fast shooting sequences nor over-penetrative.

Another CorBon load, their 100-grain “Pow’RBall,” utilizes a highly frangible bullet driven at well over 1200 fps, even from the XD-9 Sub-Compact. It demonstrates spectacular expansion and minimal penetration, both desirable traits, considering that it’s intended to be used against unprotected targets in the open. Against any kind of obstacle, however, it would be completely unsuitable. Last, it shot almost perfectly to point-of-aim in the test pistol.

In my gun, the whole array of 115-grain JHPs from Speer, Remington, Federal and Winchester shot into about 3 inches at 25 meters, which is more than adequate for most missions. Though it varied somewhat and wasn’t substantial, bullet expansion was at least satisfactory.

Unfortunately with reduced expansion, penetration increases. So be aware that the 115-grain JHPs that don’t show much expansion may well be over-penetrative on a human target, making them a civil and potentially a criminal liability.

Having said all that, the best all-around load in the test gun was CorBon’s 115-grain DPX JHP. From a Ransom Rest at 25 meters, it consistently produced three-shot groups of 1.5 inches (1-inch at 15) with minimal flash and recoil, expanded magnificently and shot to point-of-aim. 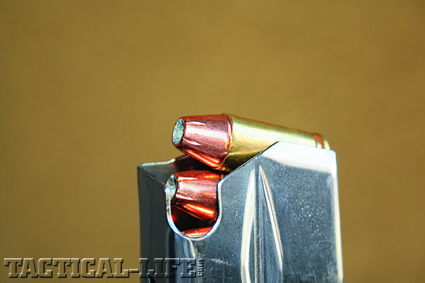 Final Notes
The fact that any sub-compact pistol is more ammunition-sensitive than larger pistols should not cause undue alarm. Remember that it’s a specialized weapon, intended for high-concealment missions. As such, it’s smaller and lighter with a shorter barrel that produces less velocity than the 4-inch barrel of the Standard or 5-inch Tactical XD-9. You don’t get something for nothing, and reduced terminal ballistic capability is the price one must pay for the smaller, more concealable gun.

This said, conscientious ammunition selection can do much to produce maximum performance from such guns, but I must again strongly suggest that you test all ammunition being considered for your particular needs before you “take it out in the street.” I think my criteria, as mentioned earlier in this text, are pretty universal, but you might well have needs that are different than mine. If you do, be sure that you clearly define them before you begin testing. Otherwise, you might end up with answers that might well get you hurt or even killed in a gunfight. 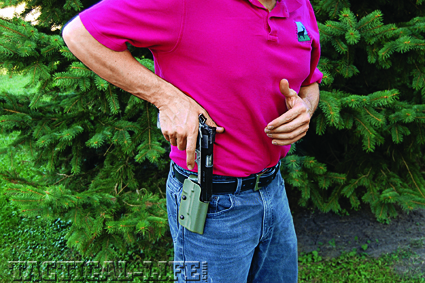 Ever since it first appeared a few years ago, Springfield Armory’s XD series has…