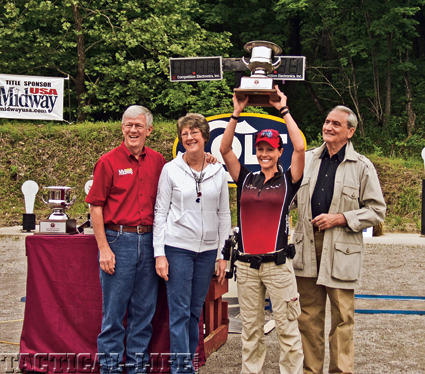 They say that you can never achieve perfection. They say that all you can do is “try to be your best.” They have never shot the Bianchi Cup.

In 1979, the first Bianchi Cup was held in Columbia, Missouri. The course of fire then was the same as it is today—four fixed stages of 48 rounds each, totaling a maximum possible score of 1920. With an initial prize purse of $30,000, the total purse had grown to over $500,000, making the Bianchi Cup the richest purse in the entire shooting sports. But many shooters, even dedicated IPSC/USPSA/IDPA shooters, have no idea what the Bianchi Cup is all about, or how their current equipment plays in the three divisions of Bianchi Cup. 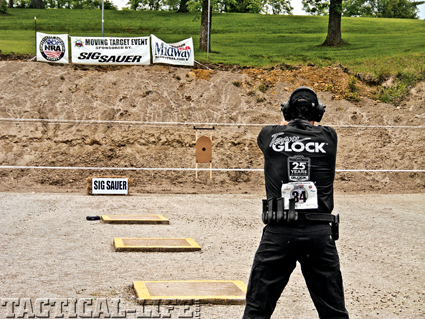 The Bianchi Cup is the national championship match for NRA Action Pistol. The terms have become somewhat interchangeable, as unlike USPSA or IDPA there are very few club- or even state-level NRA Action Pistol matches. The most famous match is the Bianchi Cup, and for many shooters it’s also the only time in a year that they will shoot a sanctioned NRA Action Pistol match. Since its inception in 1979, the Bianchi Cup has been won by the top names in the shooting sports—Doug Koenig, Brian Enos, Robbie Leatham, Jessie Abbate, and Julie Golob; just to name a few. The best shooters in the world today shoot the same courses of fire that John Bianchi and Ray Chapman shot at the inaugural cup, and explaining those courses is as good a place to start as any. 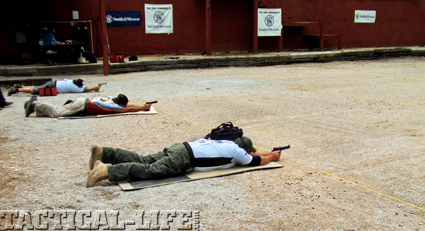 The Bianchi Cup is made up of a variety of events. Here shooters go prone to engage a rack of six plates at 25 yards.

Three Divisions
There are three divisions at Bianchi Cup with each sporting their own specialized gear and equipment. The flagship division of the Cup is definitely Open division, which features guns that are purpose-built to deliver 1-inch accuracy at 50 yards and use compensators, optics, and special “wings” to add stability on the Barricades. Each division competes separately, with the official Bianchi Cup being awarded to the shooter with the highest score out of any division. Because of the advantages to shooting an open gun, the winner of “the” Bianchi Cup generally comes from Open Division. The top shooters in Open division will routinely shoot a perfect 1920 at the match, with the winner being decided by the x-count. The next division is Metallic, which is a close analog to USPSA’s Limited division. Metallic division prohibits the use of optics, comps and wings; however, the guns in this division are heavily customized as well to deliver maximum accuracy. You will see revolvers and semi-autos compete side-by-side in Metallic division, with 6-inch custom 1911s running next to Smith & Wesson L-frames with DAO triggers and BoMar sight ribs. The most recent addition to Bianchi Cup is the relatively new Production division, which started in 2009 and has contributed tremendous growth to the sport in just three short years. Production is the place to find Sig Sauers, CZs, Glocks, Springfield XDs and any almost any other pistol legal for USPSA’s Production Division or IDPA Stock Service Pistol. 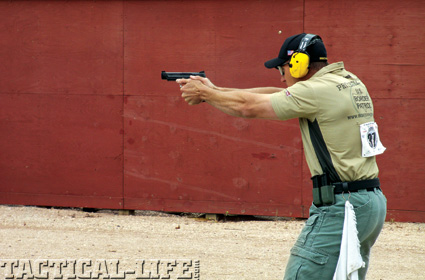 Four Matches
The Bianchi Cup is divided into four “Matches,” or what a USPSA shooter would call stages. Each stage consists of individual strings of fire that are never more than six rounds, making Bianchi Cup friendly for the shooters that choose to run revolvers. The four individual stages of the Cup are the Practical, the Barricades, the Mover, and the Falling Plates. With the exception of the Falling Plates, which is fired at 8-inch steel plates, all the stages use the NRA AP-1 Target—which has a 4-inch x-ring, an 8-inch 10-ring, a 12-inch 8-ring, and the remainder of the target is worth 5 points. A hit on the x-ring is worth 10 points plus the addition of an “x” to a shooter’s all-important x-count. Scores at the Cup take the form of the shooter’s raw points, followed by their x-count. For example, a score of 1806-100x would mean that the shooter fired a total score across all four stages of 1806, and of those 100 of the shots also struck the x-ring. 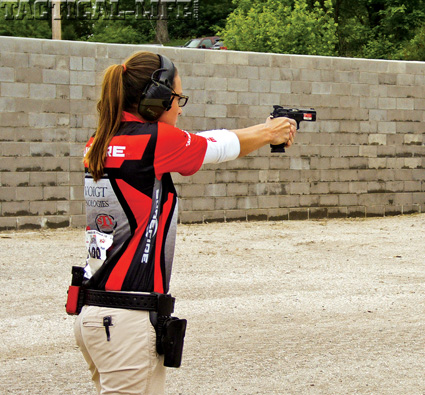 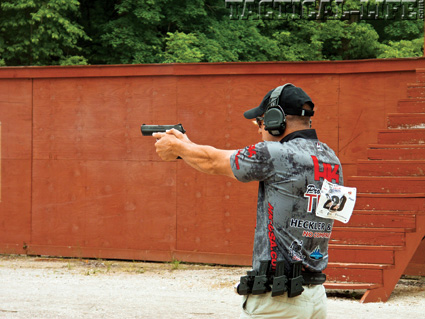 Top professional shooters, like Jason Koon from the HK Pro Shooting Team, come to the Bianchi Cup to compete.

Sounds pretty easy, right? There’s a catch, and here’s what makes Bianchi Cup so very challenging for shooters with an IDPA or USPSA background. There are no make-up shots. In IDPA, if I shoot a bad shot, or miss a steel plate, no problem—I’ll just take another shot at it to get the hit I need. Not so in Bianchi Cup. If the string of fire is 6 rounds and you fire 7, you will get penalized. Still, that doesn’t sound so bad, right? You’re probably thinking, “I can hit six steel plates with six shots”; that’s true…but then factor in the clock. Bianchi Cup uses par times that limit the window in which a shooter can engage the course. For example, one of the trickier strings on the Practical involves drawing from the holster, switching the gun to your weak hand, and firing three shots each at two targets (total of six shots) in 8 or fewer seconds. The Mover is another great example—it takes the Mover exactly 6 seconds to cross its 60 feet of travel, meaning that the competitor has those six seconds to hit a target moving at 10 feet per second with six rounds… from 15 yards away. 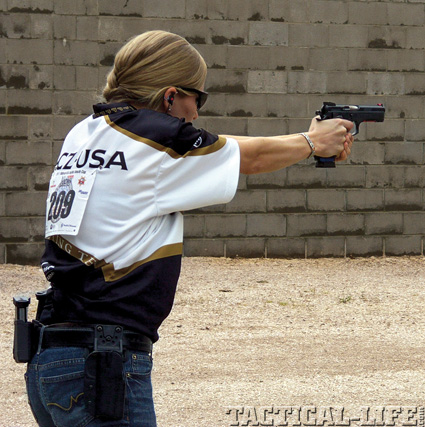 The CZ-75 series of pistols is popular in Bianchi Production Division due to its accuracy. Alex Griffith works her CZ Shadow in the competition.

Benefits
One of the neat benefits of Bianchi Cup is also to see some of the greatest shooters in the world in action. Doug Koenig enjoys a tradition of dominance at the Bianchi Cup unequaled in any other sporting discipline. He’s won the Cup a total of 13 times, and in the last 10 years (2001-2011) he’s won it every year except twice. At the 2011 Cup, Robbie Leatham became the first person to have won titles in all three of the divisions at Bianchi Cup when he took home the Production division Cup. Imagine getting to watch Michael Jordan win his 5th championship, or Hank Aaron hit number 715 out of the park. That’s level of performance you can see every year for free at the NRA Bianchi Cup.

Go to the match as a shooter, and you’ll have the opportunity to challenge yourself to perform at a level you didn’t think was possible. Dave Sevigny, captain of Team Glock and multi-time USPSA, IDPA, and Steel Challenge Champion says “I learn things about myself as a shooter at this match that it would be impossible to learn anywhere else.” Whether you go as a shooter to compete against the best in the world, or go as a spectator to see shooting sports history made, you wont regret taking a trip to the NRA Bianchi Cup. For more information on the Bianchi Cup, visit nrahq.org/compete/dept-action.asp. 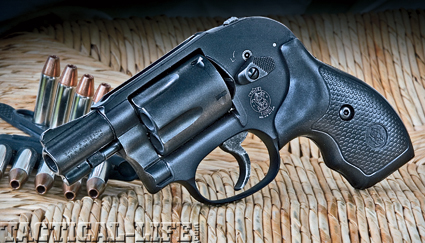