I just left my apartment on my way to my vehicle when I approached a corner and heard some individuals yelling at each other. When I came around the corner I found a young adult male holding two teens at knifepoint. The individual with the knife swung the knife at them telling them, “Come on, bring it.” The two teens were trying to back away from him. It was clear the teens were scared and didn’t know what to do.

Fearing that the teens could be stabbed I pulled my pistol from my holster. I aimed it at him and yelled for him to drop the knife. He took one look at me and tried to run. The two teens started following him while one was on the phone with the police trying to tell them where he was running.

I followed them but lost track of the guy about four blocks away. The two teens found an officer and told him where they had last seen him. The police surrounded the area and the guy was found a short time after.
When he was found he had a large hunting knife on him. He was charged with aggravated assault, carrying weapons and fifth-degree theft for trying to steal one of the teen’s bike.
—JB, IA 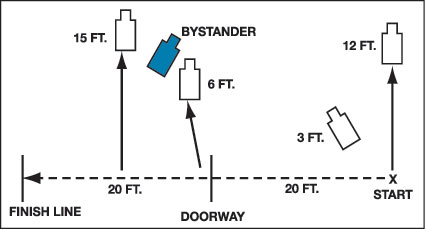