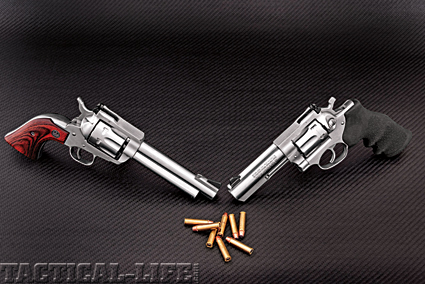 (Far left) The Federal American Eagle 100-gr. JSP left the 5.5˝ barrel of the Blackhawk at a smoking 1,629 fps. The revolver managed to deposit its charges closely grouped on target from a distance of 10 meters. (Left) For our range test of the GP100, we used Federal American Eagle .327 Federal Mag 100-gr JSP rounds that cleared the chronograph at an average of 1,460 fps. Our best 7-shot group from 10 meters fired single-action with five of seven grouped at 0.38˝.

A compromise is the solution to a conflict in which both parties are equally dissatisfied. Sometimes, however, a compromise can be a good thing. In the case of the .327 Federal Mag, a veiled compromise between the often overlooked .32 H&R Mag and the heavy-hitting .357 Mag, everyone comes out a winner.

There is little that can be added to the accolades these Ruger models, the Blackhawk and GP100, have received since their introductions. The “Old Model” Blackhawk single-action was introduced in 1955 and succeeded by the New Model in 1973. The GP100 double-action, added to the Ruger product line a quarter century ago, was a technological step forward in Ruger handgun design that utilized an innovative central “peg” to house the mainspring seat and triggerguard latch, thereby doing away with the conventional backstrap and frontstrap. The structural central “peg” was then surrounded by energy-absorbing wraparound rubberized grips manufactured for Sturm, Ruger & Company by Monsanto. The new gun also capitalized on Ruger’s modular (tool free) takedown system and double solid frame, introduced 14 years earlier with the Security-Six. 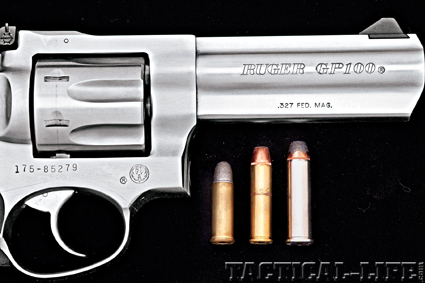 GP100 Details
The latest versions of the GP100 are fitted with new combat-style, pebble grain black rubber Hogue Monogrips with impressed Ruger emblems. They not only provide a larger and more secure grasp than the original Monsanto Santoprene stocks, but handsomely contrast the GP100’s satin stainless finish.

The .327 Federal Mag cartridge was originally introduced in 2008 for the compact Ruger SP101 model. The cartridge’s dimensions (equivalent to a .32 S&W Long or .32 H&R Mag) increased the SP101’s cylinder capacity to six rounds, making it an ideal choice for concealed carry.2 For the larger framed GP100, the cylinder capacity has also been upped by one, to seven rounds. 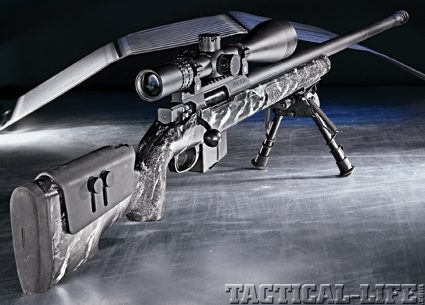