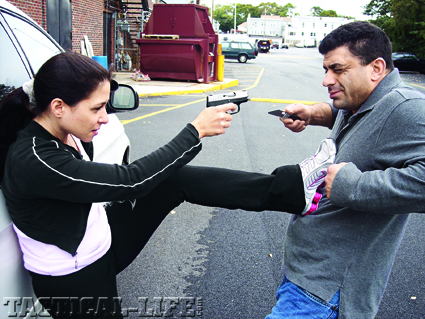 You’ve seen it a thousand times on television and in movies: an attacker jumps a would-be victim with a weapon at close range, yet somehow the “victim” is able from a static position to quickly draw his weapon, aim with two hands and shoot with deadly accuracy. It’s bad enough to see this generally accepted as practical when Jack Bauer does it on 24, but unfortunately reality is not so neat and pretty.

The truth is, most criminal assaults begin at what is referred to as “contact” or “conversational” distance, a distance at which an attacker can quickly physically touch the victim and overwhelm him. In our tests, a rubber-knife wielding assailant running towards you from across a large room can usually get in multiple “stabs” against an airsoft equipped “victim” before he can properly draw, fire his weapon, and put a “stopping shot” into the attacker—even starting from 21 feet away.

At this range, in a split second, all of your two-handed shooting skills have been rendered useless unless you’ve trained to fight your way out hand-to-hand to gain the opportunity to access your weapon. These “blitzkrieg” type attacks are the norm for how violence happens in the real world. The well-documented “action/reaction” timing gap is one reason why it is highly unlikely that you could present a concealed weapon, assume a formal shooting stance and acquire the sights quickly enough to put effective rounds on target against an attacker who has the initiative at close range. The second is a fixation on a static foot position even under duress and the third is over reliance on two-handed grips even when they limit weapon mobility to the point where the gun can actually be deflected or snatched by the attacker. This is why it’s crucial that you develop some degree of offensive and adaptive unarmed close quarter battle skills, along with learning how to “point shoot” one-handed from any position at close range.

Keep in mind when we speak of hand-to-hand fighting that this does not include techniques adapted to sporting venues such as the UFC that you may see on TV. Many have succumbed to viewing the “guard position” and other grappling maneuvers as viable real world tactics. Learning to grapple on the ground with the hope of besting larger, stronger and armed attackers while attempting to get to your sidearm or back-up blade is a recipe for disaster. If you are forced into a situation where you have no choice but to go to the ground, what is required is the ability to strike and kick while falling, and protecting your head and your gun. Remaining mobile while hitting and kicking effectively until the attacker is either stopped or shot with your sidearm is critical.

Functional fighting methodology corresponds with the type of movement that actually happens during a sudden violent attack and is devoid of flashy, complex or sportive moves. Too often, marksmanship training (including many military and law enforcement qualification courses) consists only of firing from a static position into a static target at an unrealistically long distance.  Even the more dynamic training lacks effective hand-to-hand techniques, which allow accessing the hidden holstered handgun. As a result, little attention is paid to learning how to shoot under the dynamic conditions and conversational distances that typify the vast majority of real gunfights.

In my experience, while there are an almost infinite number of situations you may find yourself in, without the ability to use adaptive gun fighting methods to acquire your sidearm, you are setting yourself up for disaster. 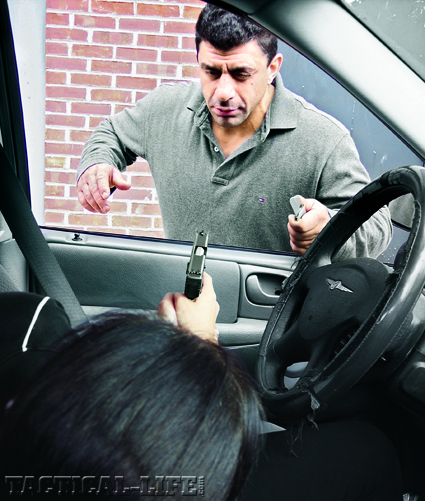 Attempted Carjacking
A woman is parked waiting for a friend with her window rolled down. An assailant approaches with the intent of “carjacking” her. (Note: as a rule, whenever your vehicle is stopped for any reason, you should quickly perform a 360-degree scan for suspicious characters. The first two places to check are the left side and the driver side mirror since these are the most vulnerable entry points.) Often a carjacker will just smash the window with a heavy object, causing injury or at least shock. Assuming she is unable to drive off, here is where practice drawing a sidearm from an unorthodox sitting position would be critical to survival. Having the handgun near the seat belt for quick access is also vital. Leaning far back and away from the intruder, she pushes the gun all the way across her body toward the threat and fires. We recommend that you get into the habit of shifting the gun and holster forward and above the seat belt whenever you get into a car.

Assassination Attempt By A Knife Wielding Assailant
Out of the corner of her eye, a woman catches sight of a man moving towards her with a knife. He is way too close for her to make a clean grab at her sidearm, and her easiest escape angle is cut off by the van behind her. Due to her close-proximity training, she leans against the vehicle and lashes out at the attacker with a series of vicious kicks. Bracing her back easily doubles her balance and power. The instant the attacker’s initial assault is derailed the woman is able to access her gun. She can either shoot him if necessary or escape while keeping an eye on him and calling the police.

You’ve seen it a thousand times on television and in movies: an attacker jumps…