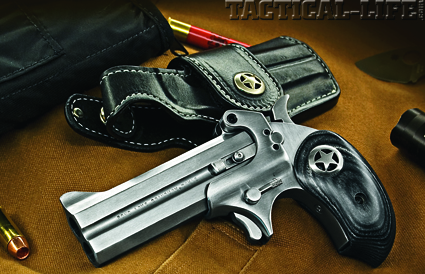 The Bond Arms Ranger is the latest in a line of quality derringer offerings that performs admirably as a defensive pocket pistol.

Home defense is an interesting concept, approached differently by everyone it seems. Many feel they should maintain the same level of armament on their person at home as they do out in the world. I disagree. The house is stationary; security is much easier maintained: locked doors, alarms, dogs, exterior lights—this is limited by only imagination and money. Depending upon the status of others living with you, it is also possible to have quite a bit more defensive weaponry stashed about the house, such as the ubiquitous bedroom shotgun.

Such an enclave of relative security allows one to dress down a bit. However, watching the news or reading the paper brings to light the advisability of having defensive weaponry close to hand, or on the body. If we are considering “dressing down,” that weaponry must be smaller than a full-size service pistol. Many choose a pocket gun for better comfort while they lounge around the house.

Investigating a suspicious shadow on my partially enclosed patio late one night I encountered an aggressive Texas Cottonmouth snake, after I had stepped too close anticipating a grass snake. An eternity later, the snake succumbed to the hits from a number of garden and yard implements by my wife and I. I firmly believe we used up our adrenaline allotment for the next month.

As usual at home, there was a pistol in my pants pocket, but I was quite reluctant to loose a few rounds of jacketed hollow-point bullets to bounce around between concrete and brick while I was trapped between them. I had no more appropriate firearm readily available, and once the fray was entered I could not have disengaged long enough to retrieve one. I really did not want that bad boy free in my yard. 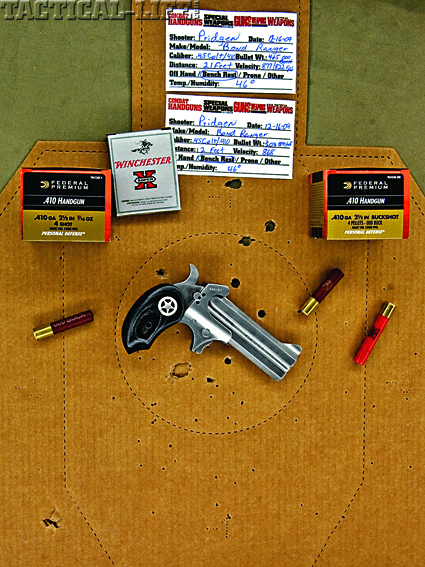 Defensive shotshell loads performed quite well from Bond Arms’ Ranger. Buckshot was fired from 21 feet, and #4 shot from 12 feet.

However, research since then has convinced me that a pocket gun capable of quickly transitioning to snake or bird shot would have been just the ticket for this situation, and for a number of other defensive problems that might arise around the house.

Being armed with a pocket gun of any design while lounging around the house is a compromise between comfort and firepower, placing one smack in that condition often alluded to by Clint Smith—a handgun is used to fight your way to a rifle. Thus, at home a pocket gun is to defend you until you can work your way to the heavier stuff. 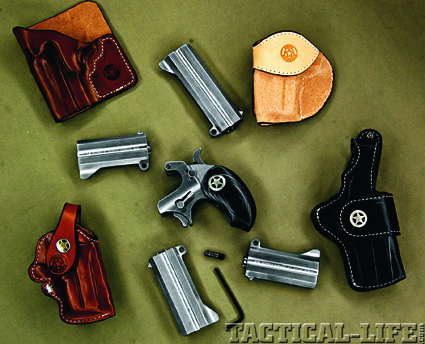 Every barrel Bond manufactures can easily be swapped by the end user onto any derringer body they build.

For the last decade Bond Arms has been just up the road from me, where they have been producing high quality two-shooters for the past decade. The folks at Bond make a plethora of calibers and six different models of derringers, including their most recent offering, the Ranger. While previous Bond derringers had 3 to 3.5-inch barrels, the .410/.45 Colt Ranger has stretched to accommodate 4.25-inch barrels. The longer tube improves shotshell patterns and helps tame recoil (certainly not inconsiderable with modern .45 Colt loads and .410 buckshot).
Derringers, in the running for th 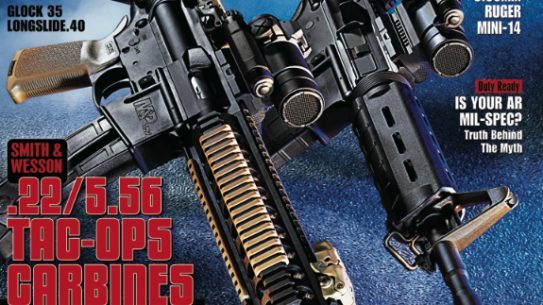