692
SHARES
454
VIEWS
Share on FacebookShare on Twitter
Like the Colt Model 1911, the John Moses Browning-designed Model 1935 Hi Power has become a timeless handgun. It has remained in production for over three quarters of a century.

At the time of its introduction in 1935, the Browning Hi-Power was the most technologically advanced autopistol being manufactured, the first to offer a maximum cartridge capacity of 13 rounds in the magazine, plus one in the chamber. This was a title the Hi-Power would hold for more than 30 years, during which time it became the most widely used military pistol in the world.

With the final patent having been granted in February 1927, the new model was originally to be introduced in 1929, but the American Stock Market crash that October and the global economic crisis that followed forced Fabrique Nationale to postpone manufacturing until late in 1934. Even after five years waiting in the wings, the Browning Hi-Power remained state-of-the-art—so much so, that the fundamentals of the design, including Browning’s linkless cam, are used by armsmakers the world over to this day. 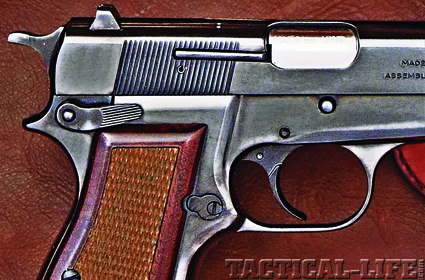 One of the more significant changes was the addition of an ambidextrous thumb safety, which was introduced in the late 1980s.

Instead of using the design John M. Browning had devised for the Colt Model 1911, which had a swivel link on the bottom of the barrel to pull it down and unlock it from the slide during recoil, John M. designed a new, simpler method involving a barrel made with a lug which engaged the slide release pin passing through the frame to cam the barrel down. The Browning short-recoil, linkless cam design not only allowed faster cycling of the action, it was a more cost-effective method of manufacturing since it eliminated the need for a separate swivel link. The Model 1935 used ribs on the breech end of the barrel that engaged corresponding grooves in the slide (much like the Colt Model 1911) that securely lock the two together. During recoil, the barrel and slide moved reward in unison until the camming action of the barrel lug disengaged them, allowing the slide to continue its reward motion, eject the spent shell casing and re-cock the hammer. The compressed recoil spring then drove the slide forward, stripping a new round from the magazine as it went, while the camming action moved the barrel upward, chambering the new round and locking the barrel and slide back together. 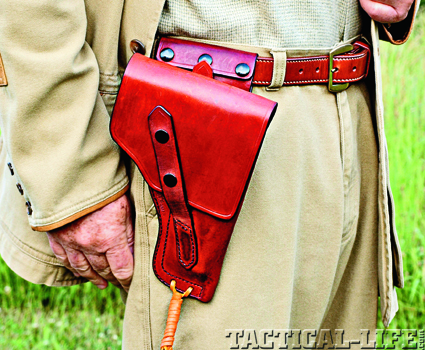