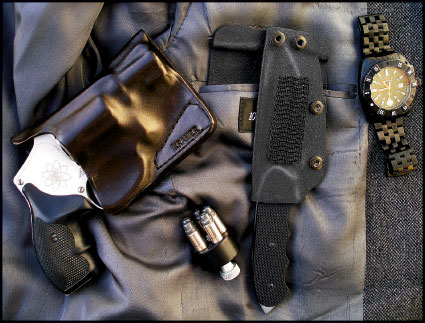 Simply putting a coat over a knife theoretically conceals it. However, carrying it unnoticed but easily accessible is something else. The point that seems to be lost on many makers is that the carry system is as important as the knife itself. For that reason, one custom knifemaker long a favorite of armed pros is Bud Nealy. 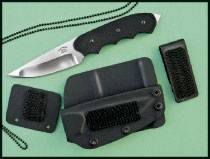 The heart of Nealy’s carry package is the “MCS System,” first developed in the late 1980s. Nealy states the idea came to him when he saw a photo of a leather sheath that was designed to completely fill a pocket so that the knife didn’t shift around. Kydex had just started being used for knife sheaths and he felt it would be the ideal material. His first sheaths were intended for carry in the breast pocket of a suit jacket. For a number of years the sheath attached to the carry system with magnets, but this has recently been changed to “Dual-Lock,” an industrial grade, adhesive-backed material that can be stuck to almost any surface. The maker feels it is significantly stronger than Velcro and, unlike Velcro, is self-mating. The sheath comes with five different attachments that in turn provide nine separate carry positions.