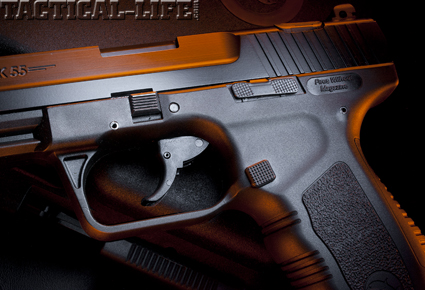 If you can’t make up your mind between a self-defense single-action and double-action pistol, a solution at a competitive price may be at hand. It’s manufactured in Turkey, a country that is producing well-made firearms, but gets little recognition in the U.S. for its gun production.

Century International Arms, which has been importing surplus firearms and producing some very interesting guns for many years, also imports newly manufactured guns from certain talented manufacturers. One of those companies is Canik55, which is owned by Samsun Yurt Savunma (SYS) and is located in north central Turkey. SYS has been around for about 14 years and manufactures sniper rifles, rocket and missile launchers, as well as aviation components for heavyweight customers like Lockheed Martin, Airbus and Boeing—so it must adhere to some pretty high manufacturing standards. Accordingly, Canik55 has earned the ISO 9001 certification and sells pistols to several law enforcement agencies and military organizations around the world—including the Turkish armed forces and police. 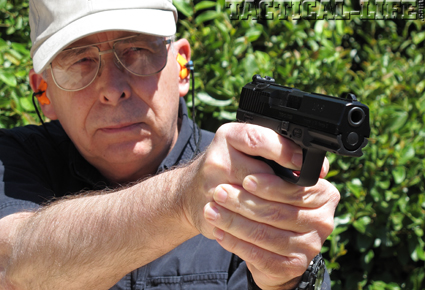 The full-size TP-9 is comfortable to shoot and easily controlled. With 19 rounds, it offers a substantial payload for use in self-defense. Photo Courtesy Doug Larson

The 9mm Canik55 TP-9 may remind some of the Walther P99. There is no doubt that the two guns are similar so it is pointless to avoid the comparison, and besides, it shows that the TP-9 is based on a proven design. It’s actually quite a versatile gun and has several features not often found on one pistol. The most interesting is the trigger.

Trigger specifications vary among different organizations. Some units want a double-action and others want a single-action, but the TP-9 has a solution that is designed to satisfy both camps. When the first round is chambered, the wide polymer trigger comes to rest in the full forward position, the same position needed for the trigger to fully retract the striker before releasing it. However, the striker is actually pre-cocked and when the trigger is pulled through the first half of its arc, a fairly light force of only about 2 pounds is required. Once pulled half way, the trigger resistance increases a bit to about 4 pounds for the next quarter of the stroke. This slack portion is easy to deal with. Then greater resistance of about 8 to 9 pounds is encountered for the last portion of the stroke when the trigger releases the striker to drive forward and ignite the primer. So, the trigger is a sort of hybrid double-action that is designed to satisfy the requirements of those who feel more comfortable with a long first round trigger pull.

However, if a true heavier double-action trigger pull for the first round is desired, after loading a round in the chamber the shooter merely presses the ambidextrous serrated decocking plunger located on the top of the slide. Although this lets the striker move fully forward, it is blocked from striking the primer by the internal automatic striker block that permits a primer strike only when the trigger is pulled. Confirmation that the gun is decocked is evidenced by the fact that the rear of the striker, which is painted red, is no longer visible at the back of the slide. That’s a nice feature. Once the decocker has been pressed, the first round trigger stroke is about 11.5 pounds. It’s heavier because the trigger has to retract the striker before it is released. 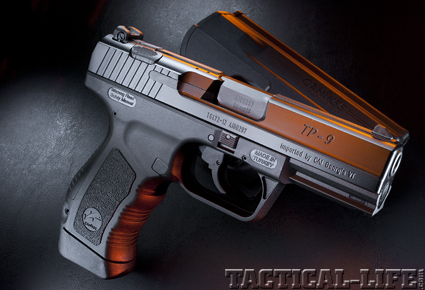 With three different trigger modes and an adjustable grip, the TP-9 made by Turkey’s Canik55 and imported by Century Arms is one of the more versatile pistols available for self-defense. 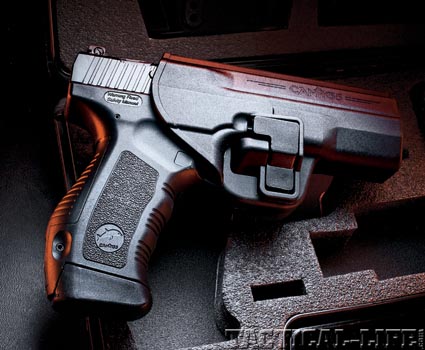 A nice touch, especially for such a reasonably priced gun, is the polymer security holster that is supplied. It is adjustable for cant and can be set up for belt or paddle carry.

After the first round is fired and the gun cycles, the second and subsequent trigger pulls are shorter like that of a single action pistol with a bit of take-up for the first half of the arc followed by some stacking before the break. Of course, after firing a round, the decocker can be depressed and the trigger then reverts to double action for the first round of the next string of fire. And if a primer fails to ignite on the first strike, this gun allows a second strike by just pulling the trigger again, which retracts the striker and releases it.

There is yet another feature of the trigger that is interesting. After chambering the first round, the trigger can be pulled through the first half of its arc—very carefully with the gun pointed in a safe direction—and the trigger will rest in its single-action position. With all these variations, this is an extremely versatile trigger.

The heart of any gun is its barrel and the TP-9’s 4-inch one is made of cold hammer forged 32CrMoV12-10 steel with six lands and grooves in a right-hand twist. Incidentally, the gun is rated for +P ammunition. The slide is also forged steel with ten cocking serrations at the rear on each side and a nicely machined top rib running from front to rear with lateral grooves to reduce glare. The decocking plunger has a matching rib. Although the slide is not round like that of a 1911, it has a slight taper at the top with a bit of a radius making it a little more eye appealing than the typical square slide found so often today. The left side of the slide is roll marked with CANIK55 and the right side with TP-9, the serial number and a legend indicating that the gun was imported by Century. What appears to be a blue finish is excellent. 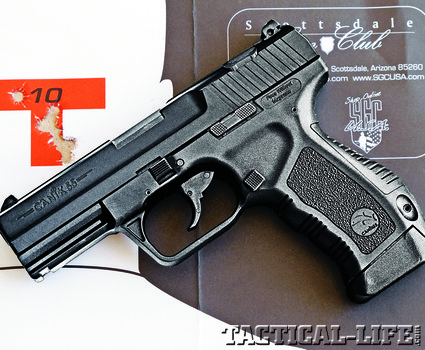 The square front sight is a polymer blade that is staked to the slide while the square notch rear is adjustable for windage and sits in a rectangular slot, not a dovetail. Adjustment is accomplished by turning a small screw located on the right side. Although slight side-to-side movement is discernible, the amount is minimal and unless a precision shot is needed would probably not affect the point of impact significantly at the close ranges most common in self-defense situations. The gun has a three-dot sighting system with dots that will glow quite brightly for low-light use when charged for only a few seconds with a flashlight.

The polymer frame is nicely formed with no blemishes and clear markings. At the front is a Picatinny-style rail with one cross-groove that accepts a light or laser, and the squared triggerguard is of a generous size that accommodates a gloved trigger finger. It is also slightly undercut to allow a higher grip in an effort to get the bore axis a bit lower in the hand to reduce muzzle rise. The sides of the grip are stippled and sport the Canik55 shark logo while the front strap has subtle finger grooves and horizontal serrations to enhance the shooter’s grip. Another nice feature of the TP-9 is that it is supplied with two backstraps, one for larger and one for smaller hands. The backstrap can be quickly changed with a drift punch and hammer by driving out the retention pin which doubles as a lanyard ring. Clearly marked on the right side are a made-in-Turkey legend and a warning to read the safety manual, while the left side warns that the gun can be fired without a magazine inserted. At the rear of the frame just below the slide in white numbers and letters is the serial number. 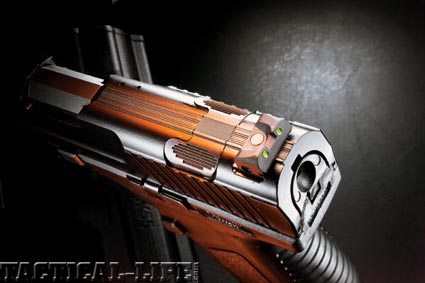 The serrations on both sides of the ambidextrous decocking plunger ensure solid activation. The rear sight is adjustable and features two dots that glow when charged with a flashlight.

Besides the decocking plunger and versatile trigger, the only other controls are the slide catch which is wide and checkered making it easy to manipulate, and the magazine release which is square, checkered and when pressed permits magazines to drop freely. Although the magazine release is not ambidextrous, it looks like it can be switched from one side to the other by removing the spring and reversing the release. Additionally, the double stack, steel tube magazines have retention holes on both sides further leading one to believe that the release can be reversed. The magazines are made by MEC-GAR and have polymer followers along with a large polymer floorplate that assured positive seating. Each held 18 rounds and worked flawlessly. Although the magazine well is not beveled, it didn’t seem to make any difference to positive reloads since the double stack magazine configuration which narrows at the top caused the magazine to naturally find its way into the well.

Disassembly is straightforward and simple. After making sure the gun is empty and the magazine is removed, decock the gun and simply pull down on the disassembly catch which is located above the trigger. The slide will move forward a fraction of an inch and then can be removed from the frame by sliding it forward. Next, the captured recoil spring, its polymer guide and the barrel are separated from the slide.

The gun is supplied in a very nice polymer carrying case along with an extra magazine, a cleaning rod, nylon bore brush and the large grip adapter mentioned earlier. Additionally, the gun comes with a polymer retention holster made of thirty percent Polyamide fiber. The holster can be configured for belt carry or by means of a paddle by removing and replacing three screws. This is a nice feature because the new TP-9 owner doesn’t have to go searching for a holster. 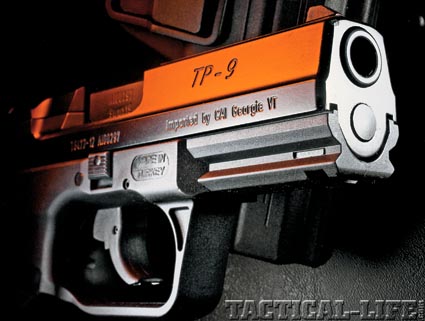 The dustcover of the polymer frame features an accessory rail for the attachment of a tactical light, laser aiming device or combo unit.

Although the TP-9 cannot be classified as a target pistol, the gun printed groups on average that are considered generally acceptable for a combat handgun. That is not to say that more accuracy is not desirable, but just that for ranges and circumstances most often encountered in a self-defense situation, the accuracy displayed is good enough to score hits if the shooter is up to the task. Even more important in a self-defense gun is reliability, and this gun had no malfunctions of any kind during the entire test.

With a bit of practice and after getting used to the trigger, it was not difficult to record very acceptable and consistent hits in tactical drills. Recoil was manageable and the gun was actually a pleasure to shoot. If you like the versatile trigger action, take a close look at the TP-9. To find out more call 800-527-1252 or visit centuryarms.com.