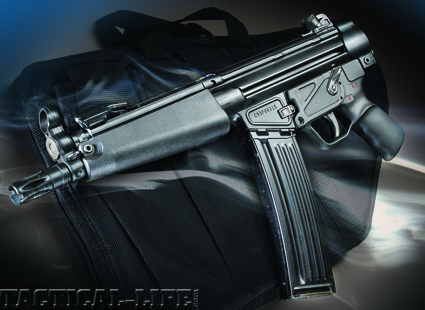 Rifle-caliber pistols are growing in popularity as an easy way for the average person to posses a lot of firepower in a small package without a lot of extra paperwork. This is why Century International Arms has recently introduced a pistol version of their popular 5.56mm caliber C93 rifle. The C93 pistol is the firm’s U.S.-made semi-auto version of the Heckler & Koch 53 sub-compact select fire assault rifle complete with military 40-round aluminum magazine.

Gun Details
Like the C93 rifle, the pistol uses the roller lock system developed by the same German engineers that went on to found Heckler & Koch. The Spanish military was an early adopter of this system with their CETME rifles as well. HK also made the short select-fire HK53 equipped with a collapsible stock for U.S. law enforcement agencies but never a pistol version for civilian sales.

The HK33 rifle on which the C93 rifle and pistol are also based is still in standard use by the Malaysian and Thai militaries where they are domestically produced using HK machinery and trained armorers. They were also manufactured under license in Turkey, however Thailand is the only country that continues to manufacture and issue the long 40-round magazines included with the C93 and has placed into service over 50,000 HK33s with their military and police forces. 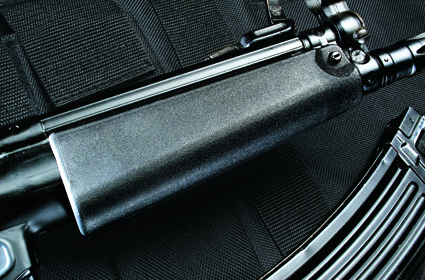 When the rifle fires, the force of the case moving rearward under recoil acts as a piston, pushing back on the bolt head and forcing the rollers out of their locking recesses and back into the bolt body. This allows the bolt carrier to move fully rearward where the recoil spring then pushes the bolt carrier and bolt heard forward back into battery.

Since the entire system relies on the full force of the cartridge case retracting under recoil, and since cases naturally expand when fired, a novel solution was developed to ensure reliable operation under various conditions. The rifle’s chamber is fully fluted so that some of the escaping gasses can come back around the case and separate it from the chamber to aid extraction.

The C93 Pistol is assembled by Century in its Vermont plant from military surplus parts kits using a U.S.-made stamped sheet metal receiver and other U.S.-made parts. The 8.5-inch barrel is also made in the U.S. from bar stock with a 1-in-9-inch twist rate and topped off with a very functional flash suppressor. 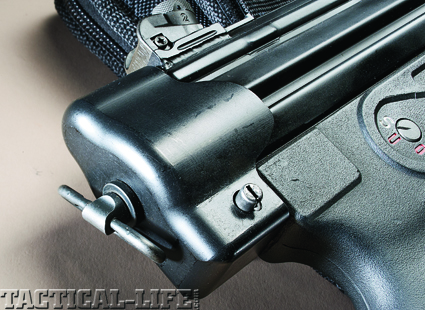 The HK Navy-style lower is a black-pebbled polymer with an integral triggerguard. The left side safety selector has three positions; the top position is safe and the bottom two provide only semi-auto fire. Although the safety is not ambidextrous the marking and position can be clearly seen on the right side as well. The safety was very easy to use with the thumb of the right hand and firmly engaged in each position with no stiffness.

Disassembly is also a very simple affair once the pistol has been cleared and the magazine removed. Start by removing the locking pin, which secures the aluminum buttcap to the receiver. The buttcap, which includes an integral sling mount, them slides straight off the receiver and the bolt head, carrier, recoil spring and guide rod all slide out as a single unit. There is an additional small sling mount at the front of the pistol just under the front sight assembly for a stable two-point sling carry. Once the buttcap is removed the pistol grip assembly can them be rotated downward and removed.

To further disassemble turn the bolt head counter-clockwise until it can be separated from the bolt head carrier. Then rotate the bolt locking piece until it comes loose as well but with caution as it is under spring pressure. Reassemble the bolt assembly in the reverse order but make sure to depress the bolt head retaining lever in order to rotate the bolt head back into its locked position. To remove the trigger assembly from the grip housing, simply rotate the selector lever until it is pointing straight up and then pull the selector out from the grip assembly. This allows the trigger assembly to lift straight up and out of the grip housing.
The black finish on the C93 pistol is extremely well executed and attractive, and is evenly applied throughout. The polymer handguard and lower are also well done with a matching pebbled texture. The fit on the pistol is very tight and the charging handle was stiff and required some force to use, but I expect that these parts would smooth out with continued use.

The right side push-button magazine release can be operated with the trigger finger and easily allows the magazines to drop free. To seat a new magazine does require rocking it into place. The iron sights are well designed and feature a fixed front post and rotating rear drum, mechanically adjustable for windage and elevation. The rear drum sights have an open square notch set for 100 yards and three apertures set for 200, 300 and 400 yards, although that is a bit optimistic.

The C93 Pistol comes standard with two 40-round military-issue aluminum magazines and additional surplus 40-round magazines are easily available from Century. Original steel HK magazines can also be found in different capacities but expect to pay a premium. Century also included a well-made padded case with the pistol provided.

On the range the C93 Pistol handled well. At just over 6 pounds, the pistol is no lightweight. The forward angle of the smooth handguard necessitated a fair amount of awareness of hand placement and muzzle control. Still, the pistol felt well-balanced and was extremely pleasant to shoot, offering very low recoil. 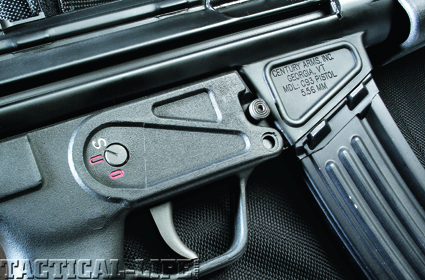 As stated, the forward-mounted, left side charging handle allows the user to keep a firm hold on the pistol grip while manipulating it but it was stiff. The grip assembly has a large opening for ease of use with gloves and includes a thumb rest and finger grooves for added comfort and ergonomics.

The large stamped metal, two-stage trigger has a slight take up and broke cleanly at 10 pounds, but actually felt lighter than that. The sights are of the standard HK variety which work well however I found shot placement using iron sights to be low and to the right, out of the box. There are many aftermarket optical weapon mounts for the HK type stamped receiver but that still remains one of my key complaints with the design. These types of claw mounts make maintaining zero with removal and replacement extremely difficult.

One normally expects a good deal of muzzle flash from firing a rifle caliber out of such a short barrel but the flash suppressor effectively eliminated that concern. Also the front heavy nature of the pistol design helped virtually eliminate muzzle flip, even firing one-handed or from the bench.

Several malfunctions were initially encountered—including double feeds and, most commonly, failure to extract. The shorter barrel provides less time for the bullet to build rearward pressure, which undoubtedly contributes to the feeding and clearing malfunctions experienced. I found that the pistol had a distinct preference for heavier bullets that did not produce any malfunctions, and a thorough cleaning and lubrication allowed even light loads to function without issue. That said, a suitable break-in period should be expected with this pistol.

The roller lock system and fluted chamber makes picking out one’s brass much easier on the range since fired cases were all covered in distinct powder burns matching the fluting in the chamber and with a nice ding on the side from ejection.

For accuracy I tested the C93 Pistol using iron sights from a sand bag rest at a distance of 25 yards. Using a mix of ammunition the C93 pistol provided impressive accuracy, which I expect would be noticeably better with the use of optical sights. My best group at that distance was 1.4 inches and that is with a lot of wind. Firing from the sandbag rest was also a bit awkward and unsteady due to the 40-round magazine sticking out of the bottom.

For over 50 years, Century International Arms has been importing and manufacturing military surplus firearms, and is in fact America’s largest importer of such arms and accessories. It is downright difficult to even find a military surplus rifle or pistol that doesn’t bear Century’s stamp discreetly placed somewhere on its receiver or barrel. 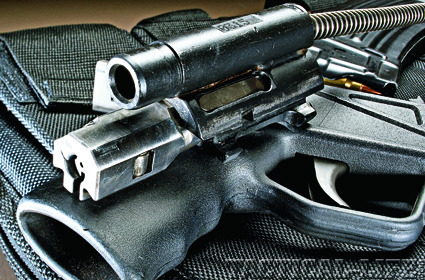 The delayed roller lock system can be seen on the bolt and eliminates the need for a gas-operated system. Note the “roller” recessed into the bolt head.

While the C93 Pistol proves itself compact, lightweight, handy, and sure to turn plenty of heads on the range, it also provides those who are willing to undergo the required federal paperwork the ability to convert it into a true short-barreled rifle by legally adapting it to accept a stock.

While perhaps not as versatile or with as many after market accessories as are available for AR-style pistols, the C93 does keep things interesting and fun. Find out more by calling 800-527-1252 or by visiting centuryarms.com. 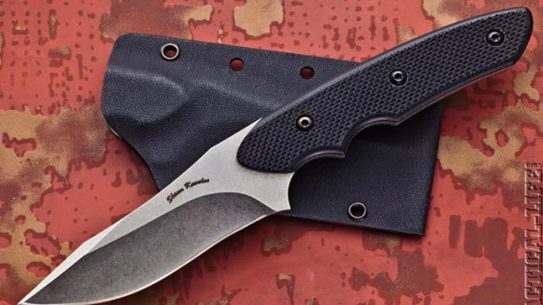