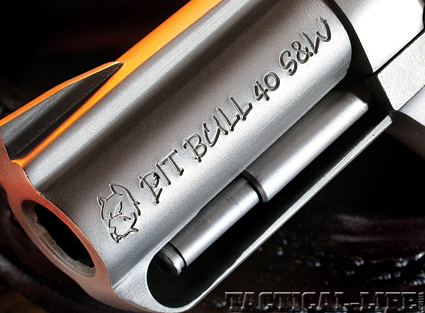 The barrel of the Charter Pitbull has an integral rib and ramp front sight on the top.

In its various manifestations, Charter Arms has been on the firearms scene for nearly half a century. Their first product was the Undercover, a .38 Special snub-nose revolver that, at the time, was the lightest steel-frame wheelgun in production. Since then, Charter Arms has remained on the cutting edge of personal protection firearms, with handguns like the Bulldog .44 Special that was introduced in 1973 and later other Bulldog variations such as the Pug in .357 Mag and the Patriot in .327 Mag. Now the skilled American craftsmen are producing a new Charter revolver, with the moniker, “Pitbull.” 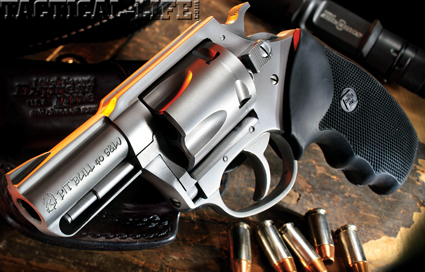 The new Charter Arms Pitbull chambers the .40 S&W cartridge, making it a perfect back-up gun to a .40 caliber defensive pistol.

Gun Details
Based on the same medium-size frame as the original Bulldog, the Pitbull will be another innovative revolver as it is being chambered for the .40 S&W cartridge, a round that since 1990 has taken the law enforcement and self-defense markets by storm. While the .40 S&W is a rimless cartridge meant for self-loaders, the Pitbull is not the first wheelgun to chamber such a cartridge as Colt and Smith & Wesson made their large-frame revolvers in .45 ACP for the military in WWI. These and some subsequent revolvers that chambered rimless rounds have generally used half-moon, full-moon and even quarter-moon clips that snap on the cartridge rims to assure proper head-spacing and spent case extraction. What sets the Pitbull apart from some of the older designs is that it will be able to chamber, extract and eject the .40 S&W cartridge sans a clip of any kind. 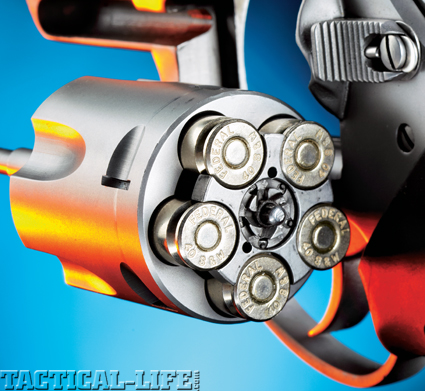 Externally the Pitbull looks like a lot of other Bulldog-sized Charter revolvers and, like its siblings, has a 5-shot cylinder, plus the barrel features 8-groove, button rifling. The frame is made from 416 stainless steel and the finish is a natural stainless matte; empty weight is only 20 ounces and overall length measures 6.75 inches. Due to its light weight, it is fitted with a rubber grip that is checkered and has finger grooves to assist with the control of recoil and muzzle flip. Other commonalities the Pitbull shares with other Bulldog-type revolvers are the one-piece barrel incorporating an ejector rod shroud on the bottom and a rib on top along with a ramp front sight. A barrel length of 2.3 inches is all that is being offered on the Pitbull at this time. 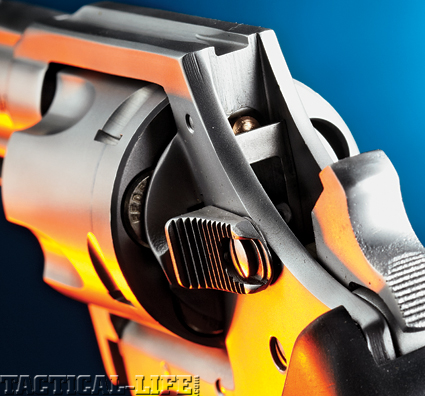 A feature of Charter Arms revolvers is the frame-mounted Beryllium copper firing pin.