The story of the Israeli-produced pistol considered here actually began in 1970s-era Czechoslovakia with the development of the CZ-75, a 9mm pistol that heralded a new era in semi-automatic pistol design. Combining the excellent ergonomic qualities and high-capacity magazine configuration similar to that of the Browning Hi-Power, a frame that wrapped around the slide as on the Sig P210 and the double-action system of trigger operation as legitimized by the Walther P38, the CZ-75 seemed to represent a new direction in handgun design. 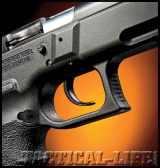 In fact, the CZ-75 was so well received that eventually other companies set about developing their own variants of the design, including the Israeli-based Jericho series and the Italian Tanfoglio pistols with those companies adapting the design with new features such as redesigned safeties and polymer frames.

Another company also took a close look at the design. BUL Ltd., a firearm manufacturer based in Tel Aviv, Israel, set about developing its own polymer-framed modernized variant of the classic CZ-75, released in 1998 as the “Impact.”  Although well received, BUL Ltd. eventually updated the pistol by adding a molded-in accessory rail on the dustcover and enlarging and squaring the triggerguard, among other changes. The result in 2005 was the Cherokee pistol, offered in both a full-size and a compact variant. And now, the BUL Cherokee is available for sale on our shores, through the efforts of Legacy Sports International (LSI).

Gun Details
The Cherokee, as imported by LSI, is offered in two configurations, the Full Size and Compact. Both 9mm pistols weigh in at around 25 ounces and share the same-sized polymer frame, featuring a full-length grip frame that houses a 17-round steel magazine. Where the pistols differ from each other is in their slide assemblies and barrels.

The Full Size sports a 4.37-inch barrel and full length slide assembly that extends past the end of the dustcover roughly 0.75 of an inch. The Compact, utilizing the same-sized frame, has a shorter 3.66-inch barrel and a commensurately shorter slide assembly that ends flush with the end of the dustcover of the frame. The slides of the Cherokee are manufactured from a forged 18CrMo4 steel part and have an oven-cured black coating. The barrels of the Cherokee are manufactured from a 34NiCrMo6 forging and have a hard-chromed finish. The bores of both the Compact’s and the Full Size’s barrels feature six-groove, 1:10-inch right-hand twist rifling, and the mouth of the barrels’ chambers feature large and smoothly polished feed ramps. The Cherokee sports a fixed, frame-mounted ejector and an external extractor on the slide.

Topping off the slide is a three-dot sighting system with white dots consisting of an integral front sight assembly and a windage-adjustable polymer rear sight assembly fixed in place by a single hexagonal screw. To further aid proper sighting, the top of the slide features three cleanly cut light-diffusing grooves along the sighting plane.

Operationally, as with the original CZ-75, the Cherokee is what has become known as a traditional double-action. This means simply that the pistol can be carried with the hammer down, with the first shot requiring a long, heavy pull that both cocks and releases the hammer. As the hammer is cocked by the rearward cycling of the slide after the first shot, all subsequent shots are light single-action pulls.

Like the original CZ-75, the Cherokee features a 1911-style safety lever that simply locks the sear lever. The advantage of this simple and straightforward safety system combined with the traditional double-action operation is that the Cherokee can be carried as not only a conventional double-action with the hammer at rest, but also as a cocked-and-locked single-action like a 1911.

In addition to the manual safety, the Cherokee also features an internal firing pin block safety mechanism. Located in the rear portion of the slide assembly, this plunger-style block restricts movement of the firing pin unless the trigger of the Cherokee is pulled. As the trigger is pulled rearward, movement of the sear lever’s upper surface allows this spring-loaded plunger to move down and clear of the firing pin’s movement.

I received a sample Cherokee Compact for testing and evaluation. It came in a simple foam-lined plastic pistol case and was packed with two magazines, an instruction manual and a cleaning kit. Having fired several CZ-75-style pistols before, I was familiar with the general configuration and operation of the pistol. The first thing I noted was its heavily contoured and sculpted frame that made the Cherokee one of the better-feeling polymer-framed pistols I have handled. The polymer frame also contributed to the light 25-ounce weight of the Cherokee Compact. Located within the frame is a set of steel inserts to interface with the slide’s rails for steel-on-steel contact.

The backstrap of the pistol features molded-in texturing, with the top 1-inch of it being vertical grooves only, while the bottom 3 inches of it sports cross-hatched textures. To minimize the risk of hammer bite, the Cherokee’s upper backstrap has a large and generous sweeping beavertail extension that cups the rounded Commander-style hammer when the pistol is cocked.

A molded-in stippled texture is present on the sides of the frame as well as extending fully around the front of the pistol’s frame. The frontstrap features three generous finger groove recesses, and the area at the top of the frontstrap where it meets the rear of the triggerguard is heavily relieved to allow the pistol to sit as low down in the hand as possible.

At the forward part of the frame’s dustcover area is the molded-in accessory rail. On the Cherokee Compact, the dustcover rail extends the full-length to the muzzle face of the short slide. I did note that the forward face of the slide and frame could use a bit of beveling to aid in reholstering the pistol.

Complementing the polymer frame of the pistol is a full set of steel controls, namely a non-ambidextrous slide release and safety lever. When the safety is swept down to disengage it, a red dot on the frame is exposed. The Cherokee features a 1911-style steel magazine release button that is reversible. The 17-round magazine itself is robustly built and features three witness holes on its left side, indicating capacities of 5, 10 and 16. As a southpaw, I personally would like to see Legacy Sports offer the Cherokee with an ambidextrous safety.

Range Time
For testing, I took the Cherokee out to the range with a selection of Black Hills, Speer Gold Dot and Remington Golden Saber ammunition. Once I was set up with my Coyote Jakes Ultra Bench, Caldwell Pistolero Handgun Rest and Beta Chrony chronograph, I was ready to try out the BUL Cherokee Compact.

Over the course of several hundred rounds fired, I did not experience a single malfunction with the Cherokee Compact. Cycling was methodical and uneventful, with the Black Hills fired cases in particular landing in a tidy 6-inch diameter pile just to the right and rear of the pistol. All controls of the pistol function positively, and the magazines seated easily and positively during reloads.

The trigger on the Cherokee Compact was good overall, although some stacking was present near the end of its 9.5-pound double-action pull. The single-action trigger broke cleanly at a somewhat heavy 5.5 pounds. Accuracy was quite good for a service-style pistol of this sort, with all three loadings averaging within 2 to 3 inches at 25 yards.

Once I was done with the bench shooting, I fitted out the Cherokee Compact with one of SureFire’s new X300 LED WeaponLight and did some more firing. The X300 fit snugly on the pistol’s accessory rail forward of the squared triggerguard, and was easy to manipulate and control. The balance of the X300-equipped Cherokee was excellent, and the weapon light’s low weight of 3.7 ounces contributed little perceptible heft to the pistol.

Final Notes
When it comes down to it, the BUL Cherokee series of pistols from LSI offers US consumers a chance to own a pistol not only employed by some of the most knowledgeable firearm users in the world, but also manufactured by their own countrymen. Building on the strengths of the base CZ-75 design and adding some well-informed updates, the Legacy Sports Cherokee from BUL should be quite a hit in the self-defense handgun market.