2
SHARES
36
VIEWS
Share on FacebookShare on Twitter
The Chiappa Rhino revolver offers a radically new take on the traditional revolver design, with an under-mounted barrel and unique ergonomics.

When I entered law enforcement in the mid-1970’s, the snubbie revolver was the off-duty gun. While a few “hard chargers” would carry a 1911, Commander or Browning Hi-Power, most of us behind the badge carried a snubbie. Heck, for many the snub .38 Special was a basic academy graduation present. The snubbie hasn’t changed much over the last 75 years, being basically the same gun as when it was introduced. The fact is the current revolver is a 19th century design that has changed little over the years.

Recently I had the opportunity to test and evaluate a new snub revolver that is truly different, one that might very well change how all of us look at the combative revolver. Introduced by the Italian-based Chiappa Firearms, the Rhino revolver is just as brutish as its namesake, but that is where this characteristic ends. Machined from solid steel/aluminum using the most up to date technology, the result is a truly unique wheel gun that will satisfy even the most hardcore pistol shooter. Don’t let the unusual appearance put you off, the Rhino is a space-age design made for serious shooters. 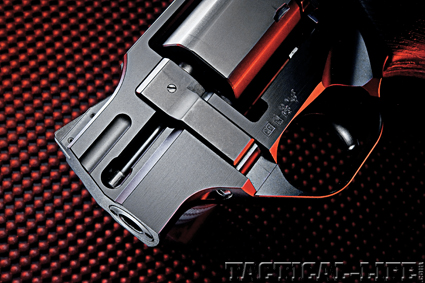 The shrouded ejector rod is located in a channel above the Rhino’s stubby under-mounted barrel.

The Rhino will eventually be offered in a number of barrel lengths, but the 2-inch snubbie is the first model to hit American shores. This makes a great deal of sense to me, as it is the snub that still enjoys huge popularity with those who are concerned with their personal security. The Rhino is a true milestone in the long history of the revolver. As with all new concepts, the Rhino has its own unique features like a flat-sided cylinder that makes the gun more concealable and more comfortable to wear, but it is the barrel location that makes it unique. The Rhino barrel is aligned with the bottom cylinder chamber, which is the key factor to the Rhino’s ability to tame the stout recoil of the .357 Mag cartridge—even from the short 2-inch barrel. The position of the barrel lowers the bore centerline more in line with the shooter’s arm allowing for a more natural point when engaging a target. For example, the height of the bore over the forearm of the world’s most popular revolver, the Smith & Wesson Model 10, is 2 inches. The height of the bore over the forearm for the Rhino is a mere 0.75 of an inch—a significant difference.
The Rhino’s sight line is also low above the forearm, which allows the shooter to get on target more naturally with greater accuracy and speed, something semi-auto users will appreciate. As previously stated, this feature also drastically reduces recoil and muzzle-flip, which insures subsequent shots will be on target faster than ever before—a critical component in any fighting handgun. This reduction of felt recoil due to advanced design permits the use of ultra-light alloys in the construction of the Rhino, making it easier to carry and conceal. 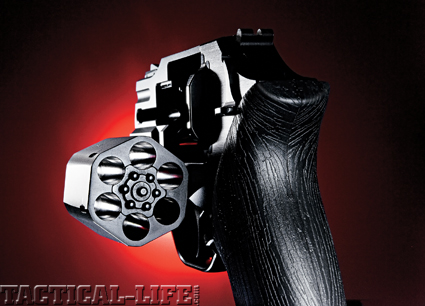 The flat-sided cylinder adds not only to its concealability but also to its unique appearance and the highly swept “beavertail” allows the shooter to sit the Rhino as low in the hand as possible.

The grip configuration used on the Rhino helps place the web of the hand above the barrel line, which also aids in fast on-target access. The stock Rhino grip is a black neoprene material that helps absorb some of the recoil, but wood grips with differing grain patterns are also available. After all, some just want a good looking grip on their gun, even if the gun is so untraditional that it is named after an ugly animal. But then, beauty will always lie in the eyes of the beholder and the Rhino has some features that make it “beautiful.”